1 What Katie did - with a little help! 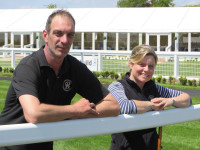 Developments on and off course are raising standards and drawing crowds at Bath Racecourse, reports Jane Carley. The work has been led by Clerk of the Course Katie Stephens, with the admirable assistance of Head Groundsman Andy Hogston and his team

The need to attract non-racing business as well as improve facilities for racegoers is driving developments at Bath Racecourse whilst, out on the track, Clerk of the Course Katie Stephens is implementing improvements for safer, more competitive racing.

In the first part of this year's flat season, the visitors' attention has been drawn by rapidly evolving grandstand and hospitality buildings. A multi-million pound development is due to be completed in July, featuring a new turreted grandstand, plus the rebuilt Kelston hospitality suite which now boasts glass balconies onto the racecourse and full height windows overlooking the parade ring.

"We have to recognise that new facilities need to work on non-racedays," Katie explains. "Bath Racecourse is in a prime position for conference and banqueting business as it is close to the motorway and in a prestigious city, plus we can offer ample parking, which is in short supply elsewhere. To make the most of the demand, buildings need to be flexible for a range of functions." However, core racing needs are also being better met due to the developments. Building a smart new bar below the Kelston suite meant rejigging the parade ring, and Katie took the opportunity to improve safety and convenience.

"Placed horses used to be unsaddled in a little bottleneck area in front of the parade ring, which could get very tight with the horses moving around. Now, we unsaddle the first to fourth across the end of the parade ring which is safer and gives a great view for racegoers."

The owners' and trainers' bar and restaurant area adjacent has been tidied up with a new lawned enclosure, providing a highly convivial setting for successful connections.

"Small touches have made a huge difference, such as rejigging the main access to the concourse with lawns and catering, and colour scheming all the buildings," Katie adds. The course itself, which first hosted racing in 1811, presents unique challenges: "It's the highest flat track in the country at 800ft above sea level, and has a 'microclimate' whereby localised rainfall often passes by, fog can descend in July and a day without breeze is unusual," explains Head Groundsman Andy Hogston, the fourth generation of his family in the role at Bath.

It is also managed without any watering system. "The turf is highly resilient and it has to be because, in July, it can resemble a desert. But, as soon as rain comes, the growth comes back," says Katie.

Bath's flat racing-only programme is well suited by the conditions and, as the soil dries out, it becomes friable and regains some give.

"Trainers who run horses here like the fact that we don't water, and that the well-established turf structure has an almost downland feel to it," comments Katie. "When our agronomist digs a soil pit, you can see that there is a really good root structure."

One important issue for racecourses is to maintain traction on bends so that horses do not slip - a particular problem when there is rainfall onto dry ground immediately before a meeting. Addressing this on the top and bottom bends at Bath has been a major project for Katie since she moved to the course from Hereford in 2010.

"The bends are mown tight to improve grip. We can also topdress them with sand, which helps to allay jockeys' concerns about their horses slipping but, on such dry ground, this improves the drainage further and can make the going even firmer," she says.

However, more permanent action was needed, especially as the repeated divot filling had created an adverse camber and a number of 'hogs backs' (humps) round the bottom bend.

An incident where two horses fell in July 2011 brought matters to a head, and Katie was able to put plans in place to widen the track and realign the bend.

"My predecessor had started to make up some ground on the outside of the bend, so we seeded and turfed it to make the track wider. We also had the bend surveyed to make sure that the realignment was correct, took off the hogs backs and corrected the camber so that it is more like a velodrome." By running three meetings with sprint races only on the card, the work was carried out and the new ground established with minimal disruption to the racing programme. "Feedback from the jockeys has been very favourable," comments Andy.

Sanding remains an important remediation technique, however, so a Dakota topdresser has been purchased to apply sand in one pass.

"Compared to shovelling sand on by hand, it is so much quicker - it can even be done during racing if necessary," says Katie. "Sometimes, even parking it alongside the bend can provide jockeys with the necessary reassurance!"

A more recent renovation shaved humps and bumps off the inside track where the round course meets the straight. Reseeded in 2015, it has had a year to establish and will come back into use this July.

"We added a pre-seed fertiliser and sowed with a four-way ryegrass mix," explains Andy, "This is a drought-resistant mixture which should suit the arid conditions."

"It established really well and then the long cold spring made it look a bit sparse, although it has picked up now," said Katie. "Continuing to race on the existing ground, meanwhile, means that we can get some ryegrass into that too and make it more resilient."

Pests and diseases are a perennial headache for racecourse groundsmen, and she comments: "We have to be proactive where nematodes in particular are concerned and it is getting more difficult as chemical products are taken off the market, with Chlorpyrifos being the latest. And yet no new active ingredients are being launched."

"Our agronomist's view is that we now need to maintain the turf in a better condition to resist attacks."

The cold spring meant that the turf was especially slow to get going this year, but Katie points out that the altitude means that they start later in the year and finish later than many courses to give time for the track to benefit from spring growth. "We started using a wetting agent a couple of years ago, which really pepped the turf up and it started the season better the following year. We also use lots of seaweed, whilst the turf tends to make good use of any rain that we do get."

With up to twenty-two fixtures a season, the dry conditions are of particular benefit in reducing damage after each meeting.

"When it is this dry, the horses only 'punch' the top layer - it's very different to repairing a national hunt track in winter! You do come to realise just how resilient turf is, although we give it every opportunity by filling with seed which germinates quickly and at low temperatures."

Big fixtures, such as Super Saturday in early June, plus Friday night and Ladies' Day meetings in July, draw crowds of upto 7,000 people, whilst higher class racing with listed races at the beginning and, new for this year, at the end of the season attract a more discerning racegoer.

The new facilities may swell crowds still further as they provide the opportunity for music and entertainment add-ons that have boosted racecourse gate figures elsewhere in the country. Andy is supported by two full time groundsmen, Andrew Flook and Jack Moon, plus raceday casuals, and he comments that the workload is manageable without the time consuming tasks of watering and endless rail movements that some grounds teams face.

"They are mowing twice a week in the peak season, though, and there is always plenty to do," Katie points out. "It is hectic in summer when we race week in, week out, but at least we have some downtime in the winter which allows us to reflect on renovations that need doing, and means that we can undertake major developments without losing meetings."

Machinery is currently under the spotlight with the existing John Deere batwing mower showing its age. "We need reliability, so we are looking at purchasing a Trimax tractor-mounted mower to take the pressure off the ride-on, especially for areas like the car parks," says Katie. "We use a number of other pedestrian mowers for lawns and a Kubota ride-on along the rail."

The slitter is prized by many groundsmen, but Andy restricts his use to rainy periods to avoid drying the turf out even more. "We verti-drain at the beginning of the season and use an Earthquake at the end," he adds, "but, with as little as 15cm of soil over the underlying rock in places, we can't go too deep!" The all new parade ring (pictured) was manufactured and installed by the world leaders in equestrian fencing, Duralock UK Ltd. The Duralock team worked directly with the design agency and with the staff at Bath Racecourse to complete the installation.

Recently under new management, Duralock has most recently completed major installations at Bath, Newcastle and Ascot. Due to its safe, durable and attractive design, Duralock Performance Fencing can be found at the vast majority of UK racecourses as well as in Europe, USA & The Middle East.