"They may have very complicated sex, with many of them producing sex pheremones and with many different types of sex organs"

In our first article, The Wracks Progress, we looked at the historical uses of seaweed and, following the lead from the Rio Earth Summit, how many alternative uses have been, and still are being found. In this article we shall be looking at the growth, harvesting and sustainability of the seaweeds used in our ecologically superior products.

Marine plants have been utilised by man for hundreds of years, collected traditionally for food, medicines and fertilisers. Seaweeds now play a wide and varied role in modern life as they are increasingly being exploited as a food resource and a source of industrial and pharmaceutical chemicals. Seaweeds provide the foundation for aquatic food webs and habitat for marine flora and fauna.

Seaweeds are particularly important ecologically: they dominate the rocky intertidal area in most oceans, and in temperate and polar regions cover rock surfaces in the shallow subtidal. Although only penetrating to 8-40 metres in most oceans, some are found to depths of 250 metres in particularly clear waters such as the Mediterranean, the Caribbean and Brazil.

The Giant Kelp is one of the largest plants in the world which, in western North America, forms an important association with the newly rescued Sea Otter. Kelp beds, or forests, play an important role in coastal zone management and act as a barrier against coastal erosion, providing a nursery and shelter function for many species of flora and fauna. The age and density of the kelp forest may be an influential factor for these species

Management on an ecological basis is, therefore, essential to ensure that a balance is achieved between the importance of seaweeds in marine ecosystems and their exploitation by humans. To do this, we need to fully understand the life cycle of the various seaweeds and their relationship with all forms of marine life.

Seaweeds are far more complex organisms than generally realised. Many have specialised tissues and growth forms. They may have very complicated sex, with many of them producing sex pheremones (chemicals that attract sperm), and with many different types of sex organs. Red algae have the most complicated sex known in plants.

Kelps are known to have quite rapid translocation There is even growing evidence of root-like structures in some wracks that reach deep into rocks.

Generally, seaweeds and many algae have holdfasts: basal structures that do exactly what the name suggests - hold fast to the rock. Seaweeds must produce some amazing adhesives, as quite small holdfasts seem to be sufficient for quite large plants.

As the plant grows, its holdfast increases in size by the addition of haptera (finger like extensions) that enclose increasing volumes of space. These spaces become occupied by a variety of animals, both immobile and free swimming. The surface of the holdfast is usually colonised by encrusting filter-feeding animals - over fifty-three species having been identified from an individual holdfast. 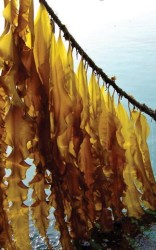 Kelp plants are composed of three distinct parts: the blade or lamina, which is supported by the stipe and attached to the substratum by a holdfast. The holdfast resembles a collection of roots, but serves only as an anchor having no nutrient gathering role.

The kelp beds around the west coast of Ireland, from where we source our raw material, support a diverse assemblage of invertebrate fauna. Kelp communities are three dimensional in structure, providing a vertical addition to the seabed. This, effectively, increases the surface area and habitat variety, which is differentially exploited by various species.

There are several physically distinct parts of the kelp plant. Each supports a different type of community, consisting of possibly thousands of individuals from hundreds of species, physically supported by an individual plant. In particular, the holdfast of kelp species provides a physically complex matrix, ideal for habitation by invertebrate animals. We can now see that a complex eco-system is dependent on seaweed, and we must be mindful of this when we harvest it for our own needs.

Seaweed harvesting in Ireland currently employs about 400 people in a mostly part-time capacity. It is quite clear, however, that the situation is deteriorating rapidly. Recruits are few as people are less and less willing to engage in such 'dirty' work that is so weather and tide dependent.

In general, it will become increasingly difficult to get the younger people of the western seaboard to collect seaweed. It became obvious that there was a need to urgently examine the mechanisation of wrack and kelp collection, and seaweed cultivation in general. 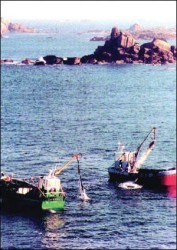 Mechanisation has been successfully applied in similar situations in a number of other countries, notably Norway and France. In Norway, both Ascophyllum and Laminaria are harvested mechanically, using a range of custom-built devices and boats. It is collected by special designed seaweed trawlers that use a dredge trawl.

Traditionally, in France, L. digitata was harvested by hand and dragged up the coast by horses. However, due to increased demand for this seaweed, more effective methods of kelp harvesting have been developed.

To effectively harvest large amounts, a mechanical kelp harvester was developed called "Scoubidou". The scoubidou is a curved iron hook which is suspended from a hydraulic arm mounted on the boat. It is lowered into the kelp bed and rotated. The blades of the seaweed are wound around the rotating scoubidou and the hydraulic arm pulls them out of the sea.

Short blades are missed by the device and form the next year's crop. Studies compared the difference between kelp cut using a scoubidou and kelp cut by hand, and found no difference in the recovery time of the harvested populations. This indicates the machinery is leaving enough of the L. digitata behind to allow adequate regeneration of the kelp and production of spores for the next generation.

Ascophyllum Nodosum is the primary seaweed used in the production of our seaweed extracts used in amenity, horticultural and agricultural applications. Harvesting techniques for the sustained exploitation of Ascophyllum have been arrived at by observation over a number of years. 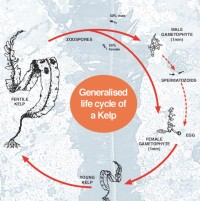 If a relatively small stump is left behind - about 25cm - this will regenerate to allow another crop in 3, 4 or 5 years, depending on location. The situation is not so simple with kelps, as the whole plants would be harvested.

From existing scientific data, we can roughly predict how long regeneration of a bed would take, but we cannot be certain that data from areas would be applicable to Irish situations.

Additionally, we do not know what effects harvesting will have on other components of the kelp communities.

It is, therefore, quite clear that we must adopt a policy of sustainable harvesting for our seaweed resources or they will become as decimated as some of our other marine resources.

To this end, a wide range of techniques have been developed worldwide to cultivate seaweed, depending on the species being farmed, the life cycle and biogeographical factors.

In general, fragments of adult plants, juvenile plants, sporelings or spores are seeded onto either ropes or other substrata in nurseries and the plants are on-grown to maturity at sea. Because of the complex lifecycles of many seaweeds, a detailed knowledge of both the biology and life history of the plants is critical, particularly at the nursery/hatchery stages.

It is from initiatives such as this, that we source our raw materials for our diverse range of Sea-Chem products, as this is totally in keeping with our company ethos of environmental sustainability.

In our third and final article we shall look at the amazing range of applications for which seaweed is used and, in particular, the great benefits that it can give to the remediation of hydrocarbon contaminated land and amenity land care.