1 What’s the difference between Grooming and Verticutting?

The Jacobsen company of Charlotte, North Carolina invented the Turf Groomer® in 1986 and is the only equipment manufacturer with an exclusive Turf Groomer®. Manuel Ruiz is a Product Manager with sister company Ransomes Jacobsen, the Ipswich-based turf maintenance equipment manufacturer and, in this article, he looks at all aspects of turf grooming and the significant difference of verticutting

The Importance of Turf Grooming

One of the most important things you can do to improve your fine turf is to add turf grooming to your regime. Unfortunately, turf grooming is not well understood and it is often confused with verticutting.

Grooming and verticutting serve different needs for the professional turf manager - both are necessary and important. This article is designed to help the turf professional understand how grooming can improve fine turf.

What is turf grooming?

In a nutshell, the reel and grooming cutting system is a proactive, three-dimensional mowing process which removes thatch and promotes thicker, healthier turf and better playability.

While reels cut horizontally to clip the vertical growth, the grooming blade is designed to reach down into the turf canopy below the normal height of cut and remove horizontal runners and organic material.

As these are removed, the plant is stimulated to develop new growth from the true plant crown. The lateral growth of the turf is then minimised and the new growth is more vertical. This ultimately redesigns the turf canopy, opening it to allow for improved water penetration, soil gas exchange and a drier environment, reducing the likelihood of leaf diseases. The newer plant growth is healthier and more resilient to both biotic and abiotic stresses.

What happens if I don't do it?

An organic layer of thatch will tend to form. Grass growth will occur at the top of the canopy rather than at the true plant crown. As a result, the following conditions will compromise the health and growth of the plant:

• Root growth will diminish due to poor soil and gas exchange.
• Organic material will not properly decompose because of reduced microbial activity.
• The thatch layer will trap moisture, grass seed, fertilisers, pesticides and topdressing, preventing them from reaching the soil and roots.
• Verticutting will be required more frequently to reduce and remove excessive plant materials if grooming practices are not in place.

Well groomed turf provides a firmer and faster playing surface. Furthermore, the firm vertical growth of the new plant allows for a superior ball lie and playability versus being buried in the turf. With turf grooming, golfers talk of seeing light under the ball on a well grassed fairway. This means you have a good lie and a naturally "teed" ball.

Are there any other benefits to turf grooming?

Besides altering the way the plant grows, the position of the growing point is also changed. With the extending stem being severed, the plant will initiate new growing points at the crown. Repeated mowing with turf groomers encourages and conditions the plant and turf to grow tighter to the soil, making for a firmer and more open canopy. This open canopy aids in the escape of excess moisture and provides a healthier, more resilient turf. You can also increase green speeds by grooming without lowering the height-of-cut.

Are overseeding and topdressing more effective on groomed surfaces?

Turf grooming can be especially critical prior to overseeding and topdressing. The open canopy allows seed and sand to reach the soil more effectively.
A three-year grooming study on overseeding in the USA resulted in improved turf health, autumn colour retention and spring green-up. The need for extensive autumn preparation for overseeding was reduced, providing a superior turf both in the autumn and spring transition. In short, grooming is a proactive cultural practice which supports maximum turf health and performance throughout the year when done routinely.

What is the difference between verticutting and turf grooming?

Both grooming and verticutting use vertical blades but, from a biological standpoint, the similarities end there. Turf groomers and verticutters are not the same. Here are just a few of the differences: 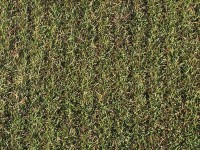 • The grooming process utilises narrow vertical blades to periodically clip the advancing growing points of the turf grass.
• The verticutter utilises the process of rotating vertical blades which penetrate deep into the crown area of the plant and possibly below, severing stolons and stems. This generally provides an effective means of reducing or removing thatch.
• Verticutting can also be considered remedial in that it is a process by which we are trying to reduce, remove or eliminate a problem. The verticutter most often will be a stand alone rotating shaft.
• On the other hand, the groomer, an attachment in combination with the spider reel, makes up the principal cutting units of a reel mower.

The product of these two pieces of equipment is quite different, as demonstrated by the figures below. Top, the groomed turf is less impacted from a visual standpoint, causing little or no disruption of the turf surface. Conversely, the picture below illustrates the more severe verticutting 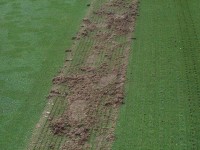 process, which can be quite disruptive.

So, to summarise, there is a distinct difference between these two important turf maintenance operations.

Groomers are designed to condition or stimulate new growth from the plant's crown using a blade spacing between 6.3mm - 12.7mm. The depth of the blade should be level with, or slightly below, the height-of-cut and initially you would not exceed 10% below the height-of-cut. Grooming should be carried out regularly throughout the season as plant growth conditions permit.

Verticutters are designed to remove excessive thatch and plant materials and sever stolon growth near the base of the plant using blade spacing between 12.7mm-25.4mm. The blade is level with, or cuts into, the soil surface. Verticutting is undertaken 2-3 times per year.