0 When did you last check your roots?

I am always on the look-out for research or general articles and text books that can help with my work or my understanding of turfgrass diseases and, to this end, I recently bought a book entitled Plant Roots. Not really as sad as it may sound because it has already proved to be quite a useful purchase and it got me thinking again about the importance of roots in relation to the overall health of the sward.

( Picture left orange/black discolouration to roots due to anaerobic rootzone)

All too often when we see turfgrass diseases or damage, it is the symptoms on the sward that get our attention and we automatically assume that the sward is the part of the plant that is infected.

Increasingly, however, I receive samples from areas of discoloured turf that have developed as a direct result of the decline or distortion in root development or function and it is the cause of the root problem that needs to be addressed rather than the turf discolouration itself. I have long considered that too little attention is paid to roots quality when assessing the health of the sward and, so, the following article aims to offer some information, based purely on my experience of the past seventeen years, on the ways in which root structure and function can be adversely affected, resulting in symptoms on the sward that may or may not be fungal disease.

In most of the work that I do, a decline in root development is often found to have developed as a result of fungal infection but, interestingly, not all fungal infections will necessarily lead to disease. Some fungi will, and Gaeumannomyces graminis var avenae is arguably the best-known cause of a fungal root disease (take-all patch) in amenity grasses. (picture right olpidium colonising a root hair cell)

The fungus initially grows along the outer surface of the turfgrass root but eventually penetrates and colonises the root cells. The infection compromises the plant's ability to take up water and nutrients and, as a result, causes an initial discolouration of the leaf that can eventually result in the death of the plant. The turfgrass plant will always show a foliar discolouration if its normal water and nutrient requirement is interrupted.

In the case of take-all patch, the fungal colonisation of the roots leads to just such a situation developing through the summer months, although the initial root infection will have taken place during the late spring. The length of the delay in the expression of the so-called 'symptoms of stress' on the sward will depend on the quality of the sward, the quality and quantity of roots and the rootzone condition itself. 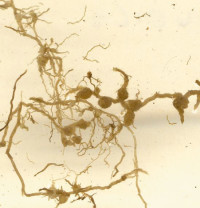 Other fungi, like Colletotrichum cereale (formerly called C. graminicola) also infect and colonise the root/crown tissues and like G. graminis var avenae, restrict water and nutrient movement through the plant. As a result, plants infected, in this case by anthracnose diseases, will also show a foliar colour change associated with the nutritional and water stress imposed by the reduced functioning of the roots and crown. Looking at the general root discolouration alone will not necessarily lead you to the correct cause of the problem.

The infection of the roots by these fungi can only really be confirmed if the roots are viewed under a microscope but, in the case of anthracnose basal rot, the discolouration of the roots and crown is generally associated with a distinct yellow to orange leaf colour and the easy removal of plants from the sward.

However, as mentioned above, not all fungi that colonise the roots will lead to long-term damage, but they may cause a short-term discolouration to the sward that would suggest a possible fungal disease. There are fungi like Lagena and Olpidium that are known to occasionally colonise turfgrass roots but which are not generally considered to cause disease to the turf.

These fungi, like Pythium species, need free water in the rootzone in order to be active and, to a certain extent, their presence in turfgrass roots can be used as an indicator that there is likely to be a problem with water movement through the rootzone. They will compete for the nutrients that are taken up by the roots and rather than being moved around the plant, the nutrients will be effectively 'stolen' by the fungus, leaving the plant short of essential elements.

If the quantity of these fungi within the turfgrass root system reaches such a level that a significant proportion of the nutrient uptake is diverted away from the plant, the sward will eventually show signs of nutrient stress and discolour accordingly. This is most often seen in seedling turf where the relative amount of root mass is low, or in newly turfed areas where the root system is beginning to regenerate.

Generally, in these cases, the visual effect on the sward can be quite dramatic but by improving surface drainage, applying little and often foliar feed and working to increase root development, the turf discolouration will be reduced with no long-term adverse effect to the sward.

Discoloured and ineffective roots can also develop for purely physiological reasons. It is not uncommon for an anaerobic rootzone to result in the orange or black discolouration of roots that can be confused with the discolouration seen in, for example, take-all patch disease. If viewed alongside one another, the two problems are clearly different and, with magnification of the roots, the fungal cause can easily be distinguished from the discolouration due to the anaerobic condition.

However, if the turf is growing on an anaerobic rootzone, the sward will often appear weak and discoloured and this symptom on the sward, along with the blackened roots, can initially suggest a fungal cause like take-all or anthracnose. It is often the case that if the rootzone is sufficiently anaerobic as to cause this blackening of the roots, the smell of the rootzone will also help to confirm the problem. It may be, however, that the cause of the anaerobic rootzone is only short-lived and that if a sample of the affected turf is removed, the anaerobic smell will have dissipated. Even if this is the case, the telltale root discolouration will remain. 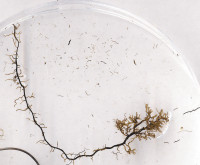 One of the other main causes of root deformity or decline is plant parasitic nematodes. These nematodes feed on the root (or occasionally on other parts of the plant) and, in doing so, directly stimulate changes in the development of the root mass, either reducing the quantity or quality.

The root-knot nematode (Meloidogyne sp.) enters the root as a juvenile and migrates to a suitable site within the root tissues where it stimulates a change in the growth of the root cells, inducing a characteristic deformity or knotted appearance to the colonised roots. The infected roots are unable to supply sufficient water and nutrient to the growing plant and, as a result, the leaf becomes yellowed and the plant, prone to additional stresses of heat, drought and wear.
Different species of the root-knot nematode produce different types of swelling on the roots and M. naasi typically produces spherical knots along the length of infected ryegrass roots.

The root-gall nematode (Subanguina sp.) initiates the development of so-called peanut like galls on the roots of Poa species and, within these galls, all stages of the nematode life cycle can be found. The symptoms that develop on the leaf tissues of the infected plants are generally a tan discolouration and general decline in the quality of the sward that can often be mistaken for fungal disease or damage.

As for the lesion nematode, it's effect on the turfgrass root is quite different. This nematode lives within the outer layer of root cortical cells and, due to the nature of its feeding, eventually causes these outer cells to come away from the inner stele (vascular cells of the xylem and phloem). The result is that the infected roots appear quite spongy, almost fluffy in appearance with the diameter of the roots noticeably increased from normal but with the cells very weakly held together. Eventually, these outer root cells will be pulled away from the stele leaving what appear to be very fine, hair-like roots that are completely useless for water and nutrient uptake from the rootzone.

Ectoparasitic nematodes feed from the roots by pushing their stylet in to the root cells whilst keeping their body outside of the roots, in the rootzone. Depending on the nematode type, the stylet is pushed to variable depths within the root and, in doing so, initiate different responses by the plant. Generally, however, the feeding of these nematodes will cause the development of stunted and heavily branched root systems in which the root tips are often the primary targets for the parasite. Affected plants will be unthrifty, generally pale in colour and unresponsive to nutrient and water application.

Over application, or availability of nutrients, can also have an adverse effect on root development that will have a knock-on effect to plant growth.
A recent analysis of extensively reddening fescue/bent seedling plants from areas across several hydro-seeded fairways, showed a severe stunting and swelling of the roots of both grass types.

Although the reddened appearance of the affected plants suggested the possibility of a root disease or infection, a thorough analysis of the plants confirmed that no part of them was colonised by any specific fungus. To try to determine the cause of the root deformity, the plant roots and the rootzone itself were analysed for plant parasitic nematodes but none were found in any of the samples tested.

The cause of the abnormal root development was eventually related to over availability of applied fertiliser that had inadvertently been held around the developing roots in the mulch used in the hydro-seeding process.

Foliar problems, in the form of disease and disorder, can certainly cause real problems in turf maintenance, but the aim of this article has been to get you to stop and think about what you see on the sward and to consider that foliar discolouration or turf decline may actually be developing as a direct response to a problem with the roots.

Root decline can frequently result from fungal infection or disease, nematode feeding, anaerobic rootzone conditions or problems with nutrient availability, especially in seedling turf. With the increasing stresses that we impose on the sward in order to achieve the desired playing surfaces, anything that compromises the quality of root development or function will have a knock-on effect on turf quality.

The above are just a selection of the problems that I have seen over the years whilst completing sample analyses but, if you know of other causes for root decline, please let us know.