1 When the Heat is on

During the summer of 2006, many places in the UK experienced some of their highest temperatures ever recorded. July brought Central England its warmest monthly mean temperature since 1659.

It gave Wales a new record with a temperature of 34.2ºC being recorded at Penhow near Newport. Scotland too, experienced its hottest month on record with a mean temperature of 15.6ºC (mean temperatures are derived from daily readings that span 09.00 - 09.00). Wisley in Surrey had the highest July figure anywhere in the UK at 36.5ºC. For a while, it was predicted that we could experience the highest temperature ever recorded in the UK. But it was not to be; that record still stands at 38.5ºC, reported in Faversham, Kent on 10th August 2003.

July also heralded England's sunniest month on record (301.5 hours), beating the previous record of 284 hours in June 1957. The exceptionally dry conditions of many areas aggravated the situation and added further pressure on turf managers, especially on those affected by the water restrictions.
Climate change or not?

In general, the south of the Country enjoyed weather that was more reminiscent of the Mediterranean region and, understandably, the abnormal temperatures and dryness stimulated a lot of speculation about climate change. A consequence of global warming? An indication of what to expect in future summers? Or, a one-off phenomenon unlikely to be repeated in our lifetime? We might never experience such a summer again. On the other hand, it may be repeated during 2007. It may get even hotter!

If hotter, drier summers are to become the norm, we must become more aware of the potential impact that drought and high temperatures have on the health and development of grasses and their communities. After all, the unusually high temperatures and prolonged period of heat that some counties experienced during the summer of 2006 were enough to cause substantial heat stress to cool-season turfgrasses.
Turfgrass Adaptations

The optimum temperature range for cool-season turfgrass shoot growth is 15º to 24ºC and 10º to 18ºC for root growth. As temperatures drop below or rise above this range the plants will experience some stress. As might be expected, cool-season species are generally more tolerant of lower temperatures than they are of higher ones.

Some turf managers hold the incorrect belief that turfgrass species with good drought tolerance will inherently survive hot summer months. Whilst there is, to a degree, a correlation between drought resistance and heat resistance, the two terms are not synonymous.

There are droughty environments that are never subjected to heat stress. For example, mountainous districts with shallow soils may regularly experience drought conditions but rarely, if ever, encounter high temperatures.

Similarly, coastal locations may be droughty but temperatures are constantly moderated by cooling sea breezes. Some species adapted to such ecosystems have not evolved to withstand high temperatures and can be prone to severe injury when cultivated in situations where high temperatures are commonplace. A number of fine-leaved fescues fall into this category (see Table 1). The inability to withstand heat stress is compounded where close mowing and excessive wear occurs.

Heat stress in cool-season grasses occurs typically at temperatures greater than 30ºC and can be lethal above 45ºC. Fortunately, even with global warming, the UK is unlikely to experience temperatures at the upper end of this range. But, it is not just the severe temperatures that can be injurious. Prolonged periods in which temperatures are above the optimum range can cause significant damage.

Plants exposed to heat stress show various physiological and metabolic responses. Photosynthesis captures light energy and carbon dioxide to manufacture carbohydrates. These are used to produce new leaves, roots, stems, stolons and rhizomes. Simultaneously, respiration consumes some of the carbohydrates in generating energy to support the growth and development of the plant parts.

When temperatures are within the optimal range, photosynthesis proceeds at a greater rate than respiration and the plant can accumulate carbohydrate reserves. However, under high temperatures, the rate of photosynthesis decreases whilst the respiration rate increases. This leads to a depletion of carbohydrate reserves and inhibition to growth. The situation is especially marked at low mowing heights where leaves are removed and, consequently, the plant's photosynthetic potential is diminished. The decline in carbohydrate availability resulting from heat stress causes a decrease in root growth and tillering.
Species and Cultivar Differences

Heat tolerance varies amongst species and cultivars. For example, during prolonged periods when daytime temperatures are 35ºC or higher, perennial ryegrass is more resistant than fine fescues. At these temperatures, the quality of fine fescue turf quickly declines, whilst ryegrass and smooth-stalked meadowgrass are more persistent.

Annual ecotypes of annual meadowgrass avoid heat stress by completing their life cycle in late spring, having produced large quantities of seed to perpetuate the species. Perennial ecotypes, on the other hand, display a range of tolerances with some clones being more tolerant than others. Some, in fact, can be as tolerant as browntop bent and Chewing's fescue.

As temperatures rise to 35ºC and beyond, there is a decrease in the synthesis of normal proteins and an increase in protein degradation. Fortunately however, the production of other proteins increases. These are called heat shock proteins (HSP) and are rapidly synthesised in response to temperatures reaching about 35ºC. Some of these HSPs can be synthesised within minutes of the temperature reaching such a chronic level. Production of HSPs may offer an explanation for differences in heat tolerance among cultivars of creeping bentgrass and other species.

Rooting depth can also influence heat tolerance of species and cultivars. Exploitation of soil moisture deep in the soil profile can maintain a continuous water supply for transpiration. The cooling effect of transpiration can keep leaves 3 to 10ºC cooler than the air temperature. However, stomata (i.e. pores on the leaf surfaces) must be open for cooling to occur and nutrient uptake may have a significant role to play in this process.

Heat stress can be particularly damaging on sunny days, with no wind, and inadequate soil water to meet transpirational needs. Decline in turfgrass quality under these conditions is most noticeable on south-facing slopes and localised dry patches. On occasions in the UK, such areas can reach temperatures in excess of 45ºC and can be lethal. Under similar weather conditions, but where there is adequate soil moisture, turfgrass canopy temperatures can be 7 to 10ºC higher than the ambient air temperature.

A slight breeze of about 8 kph (5 mph) can reduce the canopy temperature by 4 to 7ºC. Hence the need to ensure adequate air flow over the surface of the turf. Tree and shrub removal may be required around sheltered golf greens to preserve adequate air movement. Within many enclosed soccer stadiums, being concrete and steel structures and lacking any air movement, very high temperatures can develop. In these cases, installation of mechanical fans could improve air circulation and reduce leaf canopy temperatures.
Soil Temperatures

If steps are not taken to moderate soil temperatures before this stage is reached, rapid deterioration of the turf occurs. This was clearly evident on many occasions during the summer of 2006, often to the embarrassment of the turf managers.

The methods by which roots respond to high soil temperatures and regulate shoot growth are not fully understood but are thought to be linked to a decline in cytokinin production in the roots. Cytokinin is a group of plant hormones that play an important role in preventing yellowing and death of leaves during hot weather. Applications of cytokinin to the root system can reduce leaf senescence and enhance heat resistance. Some seaweed (generally kelp) and humic acid extracts contain cytokinin and may help improve drought and heat resistance.

Pre-conditioning the turf to heat stress

Turfgrass management practices prior to the onset of high temperatures can greatly influence the turf's survival capacity. A primary aim of management must be to maximise rooting depth. Ensuring adequate soil drainage and aeration is a vital contribution to rooting. Wet or compacted soils lack sufficient oxygen for turfgrass root respiration and can result in significant root loss during periods of high soil temperatures.

Fertiliser applications will also influence the heat tolerance of turfgrasses. As discussed earlier, potassium plays an important role in regulating stomatal opening. Springtime applications will enhance drought and heat resistance. On the other hand, excessive nitrogen applications must be avoided as they will encourage shoot growth at the expense of root development.

Turf managers who have experimented with multiple applications of the growth regulator Primo Maxx (Trinexapac-ethyl) may have observed greater heat and drought resistance on treated areas. Trinexapac-ethyl increases levels of zeatin riboside, a cytokinin that alleviates leaf senescence.

Sunny, hot days that immediately follow a heavy rain period can be particularly damaging to the turf. The combination of high temperatures and lack of soil oxygen can result in rapid root loss. For the same reason, excessive irrigation must be avoided. Deep, infrequent irrigation (termed wilt-irrigation) should be practiced to harden off the plants to drought and heat stress.

Plants that have undergone moisture stress prior to high temperatures are better prepared to withstand heat stress. Pre-conditioning of grasses by inducing a degree of moisture stress enables them to accumulate higher concentrations of ion solutes. In turn, the plant is better able to take up water and maintain transpirational cooling.

Mowing heights should be raised prior to and for the duration of the heat stress period. The insulating effect of the additional foliage helps to maintain cooler soil temperatures. The higher height of cut also provides a larger photosynthetic area; enhances transpirational cooling; and assists carbohydrate production and subsequent rooting.
Avoiding and relieving heat stress

However, it is important that the water is applied as a fine mist of small water droplets so that it remains on the foliage. Large droplets tend to 'irrigate' and wet the soil; ultimately risking saturation of the soil surface and a reduction in soil aeration. When average daily soil temperatures remain above 21ºC, syringing should be carried out. 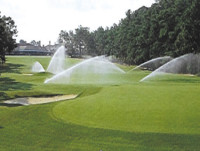 Cooling is best accomplished between 11.00a.m. and 2.00p.m., provided the atmospheric humidity is low enough to promote evaporation from the leaf surfaces. If extremely dry, hot, sunny, and still days are encountered, it may be necessary to syringe a number of times during the day. When combined with the use of fans, syringing can be even more effective at reducing air and soil temperatures. For greatest effect, fans should produce approximately 5.5kph air flow at the surface of the turf.

Any 'irrigation' that is needed during the period of high temperatures should be scheduled for late night/early morning, and not during daytime. Localised dry spots should be syringed to lower the canopy temperature but when hand 'watering' it required, it should be conducted during the cooler part of the day.

For the duration of the heat stress period, intense mechanical maintenance practices such as scarification, deep aeration, and heavy topdressing should be avoided. Shallow pricking of the surface, however, can enhance infiltration rates and improve aeration of fin-textured soils. Nevertheless, such treatments are best executed during the cooler part of the day.

Global 'warming' is the challenge

Water will increasingly become an issue. But water shortages are a consequence of global warming; of ever increasing demands from a swelling population; and of growing industrial consumption. Water issues should not camouflage or mask the primary problem - global warming. Water conservation is one of the responsibilities that turf managers will have to respect. But, it is only one element of global warming. And it is global 'warming' that may be the biggest challenge they have to contend with.
Table 1:- Relative Drought and Heat Resistance of Cool-season turfgrasses