by Charmian Robinson
in Football
on 15 Sep 2009

It has been a year of mixed reaction to the new facilities with its share of teething problems and adjustments for the town and the fans. But, one year on, the general consensus is very positive and Paul Lambert Manager of Colchester United has expressed his approval at the performance of the new pitch.

Why did Colchester United move from Layer Road?

Colchester United were formed in 1937 and had been based at their old ground at Layer Road for over seventy years. The switch from Layer Road to the Weston Homes Community Stadium came after several decades of the club looking for a suitable site to build a new home.

Throughout that time it was becoming more and more obvious that, despite the affection held by fans and the club for the existing site, Layer Road was clearly starting to show its age and, being surrounded by houses on either side, there was little opportunity for development or expansion.

The old ground had a capacity limited to just 6,300 by current safety restrictions, hospitality for just forty people and parking for only forty cars, reserved for players and officials only.

The new stadium offered the prospect of so much more than that.

The U's had considered several different sites before finally opting to move to their current home in the north of the town, and appointed Kirklees McAlpine as consultants for the new stadium on land at Cuckoo Farm.

The Weston Homes Community Stadium is a unique partnership as far as a sports stadium is concerned.

The football club are tenants at the stadium, which is owned by Colchester Borough Council. The third partner is the Colchester United Community Sports Trust, which is a charity that works with the football club to deliver community coaching and education in the local area.

The stadium cost £14.2m to build, with additional costs for 'fitting out' the stadium with furniture, carpets, seats and so on.

This money was raised through a combination of:
• the sale of Layer Road
• national government funding
• the Football Foundation
• East of England Development Agency
• other funding bodies such as the Haven Gateway (for the development of this part of East Anglia)

The Stadium and the environment

The planning process involved a number of hurdles including environmental surveys to ensure that there were no rare species of animals on the land and that drainage was suitable. It was not until the summer of 2007 that construction finally began on the new stadium site.

When completed, the Council secured additional funding with the promise that it would do all that it could to make the facility "green friendly" and to reduce the stadium's carbon footprint.

To achieve that, there have been a number of initiatives, including:
• a water tank in the East Stand, which collects rainwater to water the pitch. This water is used first before the stadium uses mains water supply
• motion sensitive lighting around the stadium. The lighting in most rooms will switch off after a certain amount of time to ensure lights are not left on overnight
• zoned heating so that only rooms that are being used are heated
• transparent panels on the sides of the stands to let natural light into the concourses where the fans go at half time, saving on lighting bills

Barr Construction, who had built Southampton's new St. Mary's stadium as well as a number of venues in Scotland, were given the build contract, whilst a number of local sub-contractors were also appointed.

The construction was completed in under a year and the club moved to the new stadium in the summer of 2008, just in time for the 2008-09 season.

Head Groundsman, David Blacknall, has been with the club for twenty-one years following a six year tenure as a junior groundsman with Nottingham Forest. 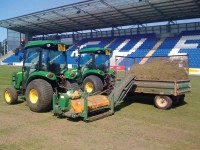 Not one for seeking the limelight, David has, perhaps, been under scrutiny a little more than he has been accustomed to over his long career with the club. But, in true groundsman tradition, his concerns lie solely with the care of the pitch, and he is delighted with the new ground.

"When you are in one place over a long period of time you get to know all its faults, idiosyncrasies and what works and what doesn't" said David. "I was consulted on the criteria required for the new pitch and, using a combination of my experience and advice offered from those in the industry who had been in a similar position, I was able to voice my preferences for the type of pitch I wanted and could easily justify my requirements."

One of the most significant improvements is the installation of a primary, lateral drainage system feeding to a six inch mains pipe. As the native soil in the Colchester area is extremely heavy clay, drainage and irrigation can be a nightmare at the best of times. David explained further. "At Layer Road we had no integral drainage, and a manual irrigation system which basically ran my life! The need to monitor the watering was a twenty-four hour requirement, and I would literally be up at all hours to ensure the pitch was being watered correctly. Or, we would be incorporating all manner of machine based drainage techniques to try and alleviate a waterlogged pitch."

"Now we have installed a Toro remote operated, programmable pop-up irrigation system, water levels on the pitch are managed much more effectively. Additional drainage work on the pitch in the last few weeks has been a pass with the Qwazae deep ground probe decompactor, before verti-draining for that essential extra help with drainage. All this has made an enormous difference to the hours we can actually play and practice. In fact, the question is now 'how do we find the time to do essential maintenance work without interrupting play?" 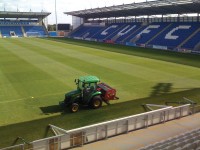 This issue has been highlighted recently because of the need to give the pitch its first annual overhaul. The fibre and sand mix pitch was constructed by Pugh Lewis Commercial Landscaping Contractors. David Blacknall has nothing but praise for the service and quality of work, but natural settlement, particularly around the drainage system, meant that adjustments to the pitch would have to be made.

A full renovation programme had to be scheduled into a six week window between June 1st and July 15th. In that short space of time the pitch was required to be brought up to international standards to accommodate the England Ladies versus Iceland International game to be played on 17th July, 2009.

"We planned to completely renovate the pitch in just under six weeks" said David. "I admit it appeared daunting and was something I would never have attempted at Layer Road."

Adrian Smith Ground Care was the contractor handling the job. The first task was to fraise mow using a Koro Field Topmaker to remove the top layer of unwanted grasses, weeds and contaminants that have the potential to decrease the drainage capabilities of the soil. Aggressive fraise mowing also removes surfaces irregularities resulting in a smoother, safer and more level playing surface.

The second process was to install diagonal sand slits to give additional drainage support to the main drainage system, followed by ninety tonnes of Mansfield sand before the whole pitch was verti-drained at close centres.

Soil analysis and treatment advice was provided by Steve Denton of Rigby Taylor. Steve has worked closely with David over the years and recommended seeding with RT14, with an application of Primo Maxx growth regulator and a 14:2:7 plus magnesium/iron fertiliser.

The pitch was finally finished and ready for pre-match training sessions on Wednesday the 15th July as required. "It was a bit nerve racking at times" said David, "particularly when the pitch had been all but stripped of grass. But Adrian reassured me that today's modern machinery and the excellent drainage and irrigation systems would allow us to control the progress of each phase in the renovation process, and he was right!"

Following the England Ladies International match, Colchester United Chief Executive Steve Bradshaw, who played a key role in the stadium's development, said "the pitch is absolutely magnificent. David has done a great job on it over the summer. Thanks to his efforts I believe that international football at the ground could now become a frequent occurrence."