0 Why do honey bees swarm? The sight of thousands of swarming bees heading in your direction, clumped on your car, a window or on top of a post box, can certainly be unnerving.

But these large groups of buzzing golden brown and yellow bees are more focused on finding a new home than attacking anyone.

The British Beekeepers Association (BBKA) said the spell of warm weather had been ideal for honeybee colonies to start swarming.

As the number of bees in a hive grows the colony runs out of space and it is time to split and look for a new home - so they swarm.
Honeybee swarm facts 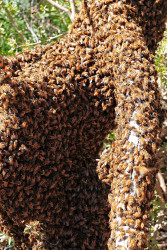 Swarm collector David Teasdale, a BBKA trustee, said: "People are becoming more interested in beekeeping, and thank goodness about that, and there tend to be more urban beekeepers.

"There are some naturally occurring colonies around, but not that many, and a lot more people in suburban areas are beekeeping.

"We would encourage that, but they need to go through the colonies and check them for swarm prevention."

After surviving a cool winter, a bee colony can expand up to 50,000 worker bees in the warmer weather, living with a queen bee, which produces a "queen pheromone".

With thousands of bees living together, not all of them receive the queen's pheromone signals - and so create a new queen.

The old queen and flying bees then leave their home to establish a new nest, but with the queen bee not the strongest flyer, they can stop to take a rest. All they want is to find a new home," Mr Teasdale said.

"And, before leaving, they gorge on honey... so generally speaking if they are swarming they are in a semi-docile state."

Whilst a swarm's priority is to find a safe place to set up its new colony, people are still urged to act with caution if they see a swarm.

"The public is increasingly aware of the importance of honeybees... but a swarm of bees still can be scary," he continued.

"The public should not be alarmed if they see or come across a swarm of honeybees."

"Contrary to some recent press headlines they are neither angry nor likely to attack... their sole intention is to find a new home to build-up a new colony."

The BBKA has a list of beekeepers willing to collect swarms, but adds that people often mistake groups of other types of bees or wasps - which they do not collect - for honeybees.