0 Why the grass is greener on the other side

You probably won't have heard of them. You may well have used their seed. You might likely recognise their cultivars from the BSPB/STRI Turfgrass Seed booklet. So, who are Euro Grass, and why should you be interested?

Euro Grass is a relatively new company evolving from two long time established organisations in Deutsche Saatveredelung AG (DSV), Germany and Hunsballe Froe A/S, Denmark. Both companies had closely cooperated for almost three decades and, in 2002, steps were taken to align both companies closer strategically in the grass business. In 2005, the amalgamation was completed and the Euro Grass company was launched. Euro Grass now commands approximately 20% of market share within Europe, making them the third largest European breeder. 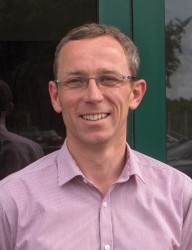 Euro Grass has, by their own admission, kept a low profile in the UK, with a strategy that has focused distribution of their varieties through various seed companies. With the appointment of a face familiar to many Pitchcare readers, Simon Taylor, as UK Retail Amenity Area Manager in 2010, they are now adopting a more direct approach to retail sales in the UK in the amenity market. Pitchcare joined Simon, and his colleague Dr Heino Schaupp, to learn about the company and their secrets to producing quality seed varieties.

Heino identifies two fundamental factors of the Euro Grass model 'having a large platform for breeding and production' and a 'strong focus on marketing and sales'.

At the very core of Euro Grass's success is their extensive breeding and testing programme. Euro Grass invest a large proportion of their turnover in research and development of new cultivars, and boast trial sites from the South of France to Scandanavia, to account for Europe's climatic variations. The optimal use of trial locations means that Euro Grass varieties can be grown over a wide ecological range of environment conditions.

Asendorf is a municipality in the Lower Saxony region of Germany, situated there is the jewel in the Euro Grass crown, the impressive 170ha breeding site, which also features 31,000m2 turf trialling plots. An extensive range of turf grasses, including perennial ryegrass, red-fescues (slender, strong-creepers, chewings), smooth-stalked meadow-grass, tall fescues, hard and sheeps fescues and tufted hairgrass ranges, are produced and trialed there.

Ecotypes are actively searched for and brought into the breeding programmes of Euro Grass sourced from different countries and continents. Cross breeding is then carried out between the same and different species. 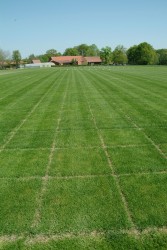 Head of the Euro Grass turf breeding programme is Cord Schumann, who emphasises the further importance of criteria, such as wear tolerance, ground cover and regeneration, as essential for assessing cultivars fit for sports turf, lawns and landscaping. Fundamental to the progression of trials on any variety, is the ability of the grass to yield.

Field, plants that do not perform to targets on specific criteria are removed from the trials. Elite polycrosses are selected for isolation, seed is then drilled in small scale plots for further testing. Consistency in an homogenous breeding is important to comply with national and international standard.

Cord's team of field technicians then go on to replicate testing, similar to that employed at the BSPB/STRI's Bingley site, on elite performing cultivars. A purpose built sports wear machine, similar to the model employed at Bingley, is used to test out trial plots, and cutting occurs with a John Deere fairway mower at 10-15mm in the close mowing trials, and at 20-25mm in lawn trials.

Cord is proud of the results, and uses the example of 'Plasir' as their top performing ryegrass ten years ago. Today, Plasir is now ranked 40th in the STRI list, whilst Eurodiamond and Vesuvius are the current top variety conceived at Asendorf, top ranked in the 2010 BSPB/STRI guide to grass seeds. The stages in a complete seed cycle from crossing and systematic trialling to certification, production and sale to the market typically takes ten to fifteen years.

This focus on the development of character type grasses, has seen the company make big improvements on varieties, and Cord and the team are excited about developments with red fescue varieties also. He cites excellent relationships between European breeders, through species exchange, as also being a factor in the success of the establishment of progressive, more aesthetic and better performing quality seed types.

As a commodity, the cost of seed is expected to increase in excess of 15% in 2011, with recent wheat prices and a relatively poor growing season forcing market prices upwards. Never more so should increased competition and supply be welcomed by the end user. Euro Grass's extensive trial programme, breeding set-up and internal expertise can only enhance the provision and quality of cultivars available in the UK market.