This is the grave of a mysterious Australian airman that has been adopted - and tended for a quarter-of-a-century - by a Staffordshire golf course greenkeeper. ​Wayne Hartshorne has selflessly tended Australian WW2 airman's last resting place for the past 25 years. 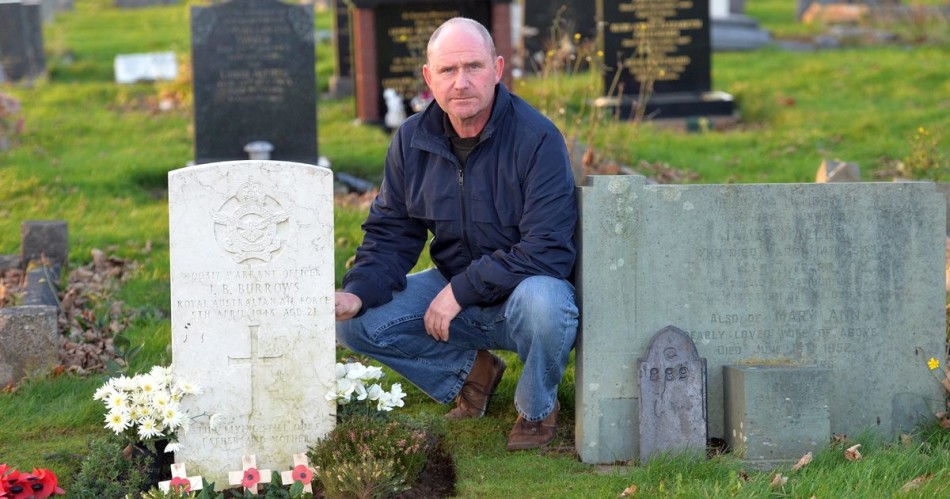 Wayne Hartshorne has been tending the grave of an Australian soldier at Cannock Cemetery for 25 years. (Image: Birmingham Mail)

Wayne has no connection to the man buried at Cannock Cemetery, Warrant Officer John Benjamin Burrows. He is not related to the Aussie serviceman. But, every two weeks, he tidies the plot - one of 37 war graves at the cemetery.

No relatives of the Commonwealth serviceman have contacted Wayne, but the story is causing quite a stir Down Under. Last week, the Cannock man was interviewed by an Australian radio station.

Burrows, a navigator in an Armstrong Whitworth Whitley bomber, died after his plane was hit whilst dropping propaganda leaflets over Germany on April 5, 1943. The craft came down near Weyhill Railway Station, Wiltshire.

His grave is immaculate - thanks to Wayne.

"I purely do it out of respect," said the Good Samaritan. "Greenkeepers are very meticulous about how short grass is."

"I just do that little bit extra. I've erected a small border and plant bulbs for spring, summer and winter. Whatever the season, I make sure something's flowering."

Wayne's labour of love began when he notice the grave, which had sunk into the soil, whilst tidying his grandfather Sid's resting place.

"I remember thinking, 'What's an Australian doing buried here?' Now I go down every fortnight."

"I still think that, one day, I'll look up and one of Benjamin Burrows' relatives will be standing over me."

"When I'm too old to continue, I don't know who will look after it. I've got two daughters and a son - I suppose I could twist their arms."

Mercury historian Richard Pursehouse has discovered some of the missing pieces in the jigsaw of Burrows' life.

He was the son of Alexander and Ada Frances Burrows of Middle Brighton, Victoria, and they chose the wording on his headstone: "Still living, still ours, father and mother." He had two sisters.

Burrows married a local girl, Marjorie Ruth, who lived in Dartmouth Road, Cannock, which explains the Cannock links. She re-married, moved to New Jersey, in America, and died in 2007.

The Australian was part of the RAF's 297 Squadron, based at Netheravon Airfield, Salisbury.

Whitworth Whitley bombers - dubbed "Flying Coffins" - were no longer used as combat craft when Burrows embarked on his last flight, but this was a leaflet drop.

The details may be sketchy, but Burrows part in our war effort has not been forgotten - and that's thanks to Wayne.

You can read the original article from The Birmingham Mail HERE