0 Wider cutting across the south for Trimax 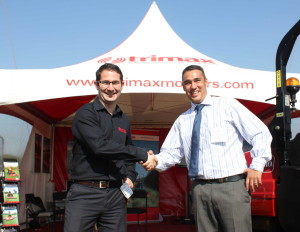 Trimax Mowing Systems has appointed Lister Wilder as a main dealer for its wide range of rotary and flail machines for the grounds care industry.

The dealer, which operates across the south of England, has for some time been hiring out Trimax mowers from its Ashford, Kent branch.

According to Lister Wilder's Group Sales Manager, Phil Hughes, the company is finding that local authority customers in all ten of the counties it serves are turning to rotary cutting, especially for larger area upkeep. Its appointment by Trimax to sell and hire the manufacturer's products from five of its other branches - Bristol, Cirencester, Devizes, Guildford and Reading - is to support this growing demand.

The appointment means that Trimax is now listed on Lister Wilder's website as one of its leading machinery ranges, alongside other big names.

The relationship between the two companies is well-established. One of Lister Wilder's sales team at its Ashford depot, David Guy, actually sold the first Trimax FlailDek out-front flail mower in the UK back in 1997.

"We are proud to announce the appointment of Lister Wilder as our dealer for six English counties," said Trimax UK's marketing manager, Karl Stevenson.

"We have worked with them from our very early days in this country, so it's great to be able to cement a new partnership. Lister Wilder fits well with the wider Trimax network and we're excited to have them as part of the Trimax family."