The Machrie Links, Islay, one of the UK's most westerly and spectacular golfing locations is blessed with outstanding coastline vistas in a natural setting. 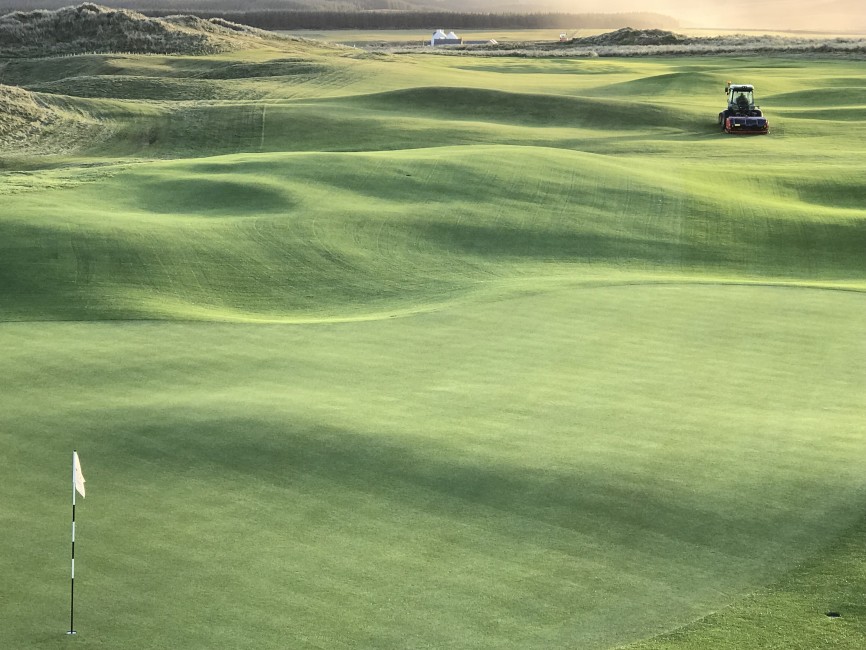 A change of ownership in 2011 and significant investment has hastened a remarkable transition. European Ryder Cup Vice Captain, D J Russell was commissioned to modernise major areas while not detracting from the original 1891 design by Willie Campbell.

Course Manager, Dean Muir, joined from Muirfield three years ago and he and his team of seven are seamlessly blending the old with the new. A six hole par three course has been added, along with a 300 m driving range and 4 500 m² practice putting surface. The Championship course re-opened in summer 2017 and in a few months' time a new 50 bedroom hotel and club facilities complete on this Hebridean island.

As the project evolves three separate Wiedenmann UK purchases have contributed to re-establishment works across the course. First to arrive was a Super 600 to launch their rough management programme.

"I'd had one at Muirfield so it was my first purchase. For purpose, nothing comes close to it. Reconstruction meant we were going into huge areas of fearsome rough never previously renovated, only by sheep and cattle. In 2016 we started to cut and collect those roughs and they grew rapidly again. Rain held us back at the end of last year but we will be principally flail mowing and collecting. In time we will scarify it but for now the priority is to keep cutting it down to a manageable height.

"Our dunes and situation make it a bit of an issue getting from A to B. There aren't that many travel routes round the course so its capacity really helps."

Next on Dean's list was a new Wiedenmann Terra Spike GXi8 HD arriving in October 2016.

The GXi8 runs through all fairways annually once during the winter months. Greens are spiked every other year as being built essentially on sand dunes gives rise to few compaction issues. With its low centre of gravity and close coupling to the tractor, the aerator is fully equipped for the challenge. The Advance Tine Control feature makes sure the tines' incision into the ground is always precise leaving a neat finish. Dean's team takes advantage of the best weather windows.

"We do vary depth. In 2016 we went for 250 mm, this season we've opted for 200 mm running 15° of heave. The course is relatively new in parts and because of some changes there are more stones about. Heave helps us glance stones rather than hitting them full on.

"For me the biggest benefit of the Wiedenmann is its smoothness. Just no vibration. With other machines sitting in the cab up to eight hours in the day, you'd really know about it. But the Wiedenmann is smooth. It's got several absorption systems that dampen any vibration. You get no shock transfer to the driver or the tractor."

Finally Machrie Links purchased a 1.7m Terra Rake in October to work in tandem with the Super 600 and other kit for the course.

"We've yet to get the full benefit of the Terra Rake, the wet summer held us back. It will work hard in the season ahead especially as we work to get areas of rough to manageable height and more golfer friendly. The 1.7m width is the right size to deal with our dunes and undulations. The Super 600 will cut the rough down gradually with the Terra Rake going through it. Down the line we'll use it to scarify."