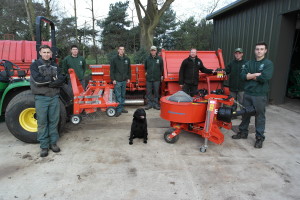 Fulwell Golf Club in London has taken delivery of its fourth Wiedenmann machine in three years. Clever deployment means the team there is getting through huge amounts of work far quicker than envisaged and has revitalised two separate areas quite unexpectedly.

Paul Brown, Course Manager at the Middlesex club says: "Until three years ago, I'd very little experience of any Wiedenmann machines. In summer 2010 we bought a Terra Spike XP and it was a real standout - just easy to use and exceptionally precise.

"Last February (2012) when we needed an all-rounder for cutting, collecting and scarifying, we checked the Wiedenmann Super 500. Fulwell was built on the site of a farm 110 years ago and at points you can still see the ridges and furrows where it was ploughed. The Super 500 having dual axles is a huge benefit. You're not always approaching straight up and straight down so we needed a machine that would move across the contours really easily so the optional contour kit was invaluable to us." he continues.

"As part of our woodlands regeneration programme it's had very productive use. Literally within the year we achieved complete grass cover on areas previously obscured by seven or eight feet of bramble and scrub."

Some outer areas of the course also had really thick ivy cover. Over a period of time, Paul's team of six has worked hard at stopping the ivy encroaching. The new machine's efforts here have been a real bonus.

"We set the Super 500 to scalp the ivy watching closely for any hidden tree stumps! It picks up sticks, small twigs along with taking the ivy off the top. Clippings get compressed in the hopper before we back up to the trailer and dump it straight in."

Paul Brown added: "While a lot of blowers now have the facility to change direction they are not particularly powerful or else very noisy. The MegaTwister in terms of the volume of air it produces and the volume of material you can actually shift in one go is immense. Ours is hydraulically controlled from the cab which gives you the flexibility to move the chute round and round and up and down making it really versatile. You can back into areas. It's so much more comfortable as you don't have to sit all day with your neck craned."

"I'd seen the Terra Rake previously and dismissed it thinking it had a limited use. But I was so wrong. Currently it's my favourite bit of kit. The team here puts all equipment to the test. The Terra Rake's been teamed with the Mega Twister - putting it up front so it loosens off leaves and twigs that have been crushed. But our best 'find' is needle collecting.

"Fulwell has lot of Scots and Corsican Pines. Their needles have an exceptionally small surface area taking a long time to shift even with back pack blowers. In the past we manually raked them.

"One of the boys, with the Terra Rake and MegaTwister in combination, happened on an area with quite a few needles on the floor and decided to rake through and loosen them for blowing. In actual fact he raked them up into a heap to the point that there was so much needle material in front of the rake that it was lifting it up. Using the Mega Twister he then managed them into a wind row which we picked up with the Super 500. In one pass we pretty much picked up 98% of needles. The labour saving on that alone is quite significant.

"Constant needle material under trees means it is very difficult to establish grass there. With another few passes of the Terra Rake we created a perfect seed bed and scattered some seed. Now we've got grass cover in areas where we've never had it before. That's two new areas in a very short space of time."

Paul Brown concludes: " When it comes to Wiedenmann I'm a convert and I have an especially high regard for the quality of training and time invested at installation. Nobody else offers such service."

Grant Buckingham, from dealer Ernest Doe of Esher, said: "Not only does Wiedenmann machinery always perform well, the support and technical advice given by Wiedenmann's Sales Manager, Chas Ayres, gives progressive clubs like Fulwell scope to use their machines so innovatively."