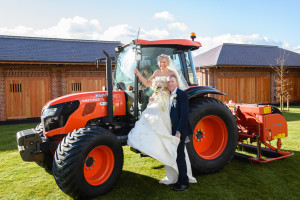 Three years on from their purchase of a Wiedenmann Terra Spike XD 8, the team at York racecourse couldn't be more delighted with its output, agility and coverage. In fact so delighted - it got an invitation to the boss's wedding in February.

Course manager, Adrian Kay said: "We wanted a new aerator that would work comfortably at 275 mm. We factored in ten hectares of race track and couple of hectares of lawn area so it pointed to something both deep and quick. We needed it to be at least two metres wide hence the XD 8 virtually picked itself and it's as good now as the day it arrived.

"Depending on weather conditions it's in use probably ten to 11 times a year. Already we've been over the course in February and we're due again next week. Our first race isn't until mid-May but we're on programme. After every race meeting we're out immediately after to decompact the turf. The XD 8 with its heave does a great levelling job for us as well. Also if the ground has been good to firm the XD8 does a good job of lifting the shallower prints following racing.

The team at York frequently change the tines, the depth and the degrees of heave depending on time of year and how close they are to a meeting. With both 25 mm and 19 mm solid tines at his disposal Adrian Kay says he really appreciates its flexibility, its speed and the fact that any of his team of seven can make the tool-free adjustments and take the machine out.

"Two to three weeks away from a meeting the usual settings would be 15° to 20° of heave with the 25 mm tines. Nearer that then the heave might narrow down to say 5° to 10° and we might not go as deep or just use the finer tines," he continued, "then it comes back out again after the meeting."

Adrian Kay, who worked previously at Aintree before coming to York in 2006 is well acquainted with Terra Spikes, using two models at the Liverpool course. So it was entirely appropriate that at his own wedding in February to his wife, Nicola he had his photographs taken on York's fine lawns with his trusted XD 8 and its tractor in the background!