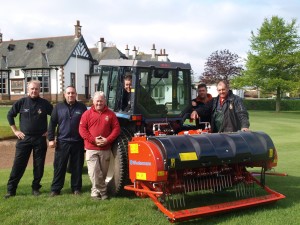 Hosts of a PGA Euro pro tour event in Edinburgh in July, The Royal Burgess Golfing Society which was founded in 1735, are now very much looking forward to using their new aerator everywhere including greens, tees and fairways.

Head Greenkeeper, Chris Yeaman said that on its first major outing all 18 greens were done in just over a day and he expects with a few more practises they will get that down to a day.

"It's been hugely impressive so far. One of our lads, new to the machine got straight on to the task of aerating the greens with 8 mm tines and we couldn't believe how smooth it was for both the operator and for the tractor itself. With our previous machine we'd be changing operators all the time and had to be really careful of vibration. It's also very clean and very precise leaving the turf very neat and undisturbed," he said.

Stephen Muir, Area Sales Manager with Fairways GM who are Wiedenmann's exclusive dealers in Scotland said: "The GXi8 HD has operator safety at the heart of its development. Take for example its multi rib belt drive system, designed so it produces optimum force flow. Its balanced crank shaft, sprung-loaded headstock -the VibraStop-and PowerPacks are part of the anti-shock anti vibration system built into the machine. These protect the machine, the tractor and, crucially, the operator. They also contribute to the longevity of the machine by minimising maintenance. Royal Burgess opted for the 1.8m wide GXi 8HD because it matched well with their existing tractor and offered excellent coverage."

"As well as being incredibly quick, what we're finding is that it is so easy to deploy. We agree the depth and spacings at the start of the day and then I can just leave the operator to it. All our users have found it extremely straight forward and stress free," he said.