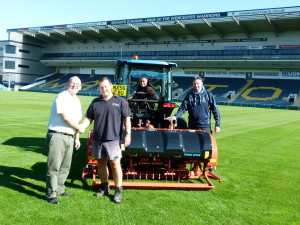 "It's so easy to operate and quick that from try line to try line it completes in three rather than the five hours our previous machine was taking. It's everything we wanted," he commented.

The club who were 2014/15 Green King IPA Championship and British & Irish Cup Champions took delivery in September along with an Iseki TG 5470 tractor whose tyres are covered by the 1.8m wide aerator.

"Simon Bingham at T H White alerted me to Turf Maintenance LIVE!, an event in Peterborough, where several Terra Spikes were shown. I went with the sole purpose of comparing them and was instantly convinced by the GXi8 HD's simple adjustments and speed.

"Every fortnight we deep tine the main pitch, varying depth when required, but mostly to 25 cm. Probably on the sixth week we might tine a bit deeper. We pretty much will stay with that schedule, the only thing that will prevent us will be frost or snow," said Martin Knight.
With two others in the ground care team, the time savings come in handy as the Aviva side has a further eight full size natural pitches and ten junior size pitches to maintain.

Simon Bingham, Area Manager for T H White's Grasscare Division at Redditch said: "It all came together at the demo. The GXi8 HD is both very precise and quick. Martin got to view it side-by-side with wider, lighter and deeper Wiedenmann machines. Others from the RFU attended, including Keith Kent from Twickenham who was able to vouch first hand for the time savings that could be made as the national stadium also has a similar aerator set up."