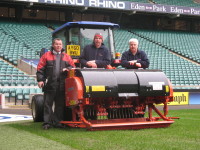 The deep aerator - the quickest in Wiedenmann's fleet - made such a definitive debut that it is now guaranteed a regular place in the heart of the team.

Keith Kent, the RFU's head groundsman said: "On the Friday we were keeping a particularly close eye on conditions. We have a direct line to weatherman John Kettley who warned us to expect at least 15 mm of rain overnight and before kick off.

John's very rarely wrong so when his text came in we knew we had to act immediately. Ian Ayling, my no 2, and I had a quick chat and decided that it was time to christen our Wiedenmann. Ian then spiked the pitch, post to post in just over 3.5 hours.

"That night we went home knowing that whatever the weather threw at us the next day we would cope. With 82,000 people on the move that morning it's a considerable responsibility but we knew we'd called it right. That's how much the XF6 means to us." 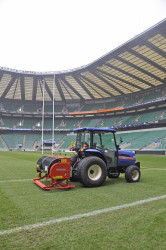 ight months have lapsed since its memorable start and the Twickenham team use the XF6 to aerate their turf roughly every four to five weeks.

Keith Kent says: "We're using it pretty much as we had expected. We chose the fastest Wiedenmann as that's what suited us and use the 12mm solid tines to keep the pitch open. The more you get holes into it the deeper the roots grow. Like everything you get a feel for a machine and what you can do. Quite simply it's one of the best tools we've ever had and we wouldn't be without it."