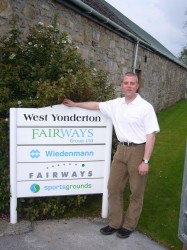 "I've been involved selling Wiedenmann products from the dealership side for the last seven years and it seemed like a natural progression for me. I'll be covering both the north and south of Ireland for Wiedenmann as well as Wales - so as well as getting to know the dealers, I'll be making regular acquaintance with the ferry crossing between Holyhead and Dun Laoghaire," he said.

As part of his induction Paul will shortly visit the new purpose built Wiedenmann HQ at Rammigen, Germany as well as touring their factories and design plant.

David Rae, Wiedenmann UK's managing director says, "Paul is joining at a good time for us. We've new machines in the pipeline and steady interest across the Wiedenmann fleet in aerators, mowers and collectors so he has much to keep him busy.
"With Paul's arrival we've taken the opportunity to amend the Wiedenmann UK sales territories a little - Chas Ayres will be still be covering the south east and south west up as far as Lincolnshire while Michael James will cover northern England and Scotland from Lincolnshire up," continues David Rae.

"Paul's technical knowledge is first rate. He will quickly make his mark and will also be working with Groundpro - our new trading division. We know he will do well."

In his spare time Paul is a youth leader, enjoys landscaping, collecting die-cast models and spending time with his two young daughters.