The Terra Rake, a perennial favourite of Wiedenmann UK customers, has been re-engineered to double both its output and width. A brand new folding frame means the versatile verticut harrow becomes significantly more time efficient for those with sizeable areas to cover.

Previously only available in 1.6 m and 2.1 m widths, it now adds a 3.2 m and 4.4 m to its range, the two wider machines taking advantage of technology developed as part of Wiedenmann's continuous R&D programme. In essence the folding frame means that two separate same-sized units either 1.6 m or 2.1 m, can be transported together and 'joined' when in work mode to create twice as much output, the folding mechanism working hydraulically from the operator's in cab controls.

In all these instances the parallelogram-shaped Terra Rake has a robust steel frame containing closely arranged rows of long verticutting tines. 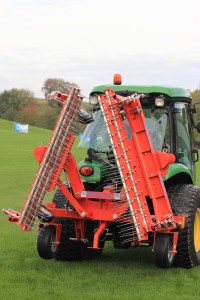 These tines are self-vibrating and probe the turf inquisitively, their aggressive action pulling up thatch and depositing it on the surface.

The two original machines have five rows just 16 mm apart while the new wider frame units favour four rows 20 mm apart, both configurations while slightly different maximising their opportunities to forage thatch and also ensuring no blockages between prongs. Forward speed is not compromised by widening the machines with all achieving a high work speed of up to 12 km/ hour.

Huge economies of scale can now be realised as a single tractor and operator can in effect do double the work or time can be halved for a specific task. Ultimately contractors, estates and course managers are now further empowered when making selection from the range.

In line with the original two units, the wide-span models attach to tractors and power units by 3 pt linkage. However, Wiedenmann engineers have created a new 1.6 m Terra Rake trailed draw bar option with electric wheels which doesn't need linkage attachment. Another all new design it features the four row configuration of tines and is ideal for working in more confined areas where power units have easier access.