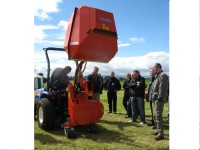 Within 48 hours of its arrival in the UK, Wiedenmann's newest machine was on show to over 150 dealers and end users at a series of Demo Days held at their main office, next to Glasgow Airport.

The all new MCS Favorit 650 with its unique Wiedenmann 540 rpm "whisper" suction turbine and innovatively routed airflow system brought an admiring hush from the visitors from across the UK and Ireland.

Area Sales Managers, Mike James (on tractor) and Chas Ayres, (second from left) gave the low-down on this high tip compact collector. Talking afterwards Chas Ayres said: "Spent air is discharged through a low level air vent, allowing the ground to absorb almost all of its noise. The Favorit 650 therefore adds "no noise" and can work without restriction in sensitive areas such as hospitals, schools and residential sites."

"For the Demo Days being so close to the airport was really convenient," he continued. "We had dealers and customers flying in from six regional airports. Our testing field is only 200 metres away from Glasgow's perimeter fence and runway. However, what was really funny was that on each of the days every time I mentioned the Favorit's quietness, an aircraft would take off and completely ruin the effect!"