by External source
in Football, Industry News, and Rugby
on 03 Mar 2016 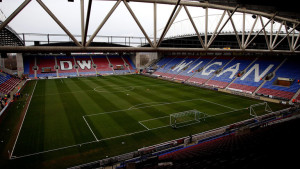 Wigan's DW Stadium is to host two fixtures in different professional sports on the same day for the first time on Easter Monday.

Wigan Athletic will play Rochdale in League One at 1.30pm after their opponents agreed to move the game forward from its original time of 3.00pm.

The March 28 Super League fixture between Wigan Warriors and Hull Kingston Rovers will then start at 8.00pm.

It is the first time since the venue was opened 17 years ago in 1999 that such a scenario has arisen, despite the Warriors formally asking the RFL to avoid a clash in September.

The agreement means there will be less than five hours for ground staff to change the surface from a football pitch to one fit for rugby league.

Although they regularly change from one to the other due to the two clubs sharing the stadium on a long-term basis, there has never been such a short turnaround before.

Wigan Athletic chief executive Jonathan Jackson said: "We would like to thank Rochdale Football Club for agreeing to an earlier kick-off.

"Otherwise there would not have been enough time to host a match in the evening. Stadium Manager Andy Birch has devised a plan to turn the stadium around in the time available. It will take a huge effort from his staff, involving the groundsman and his team, the stadium hospitality staff and cleaners."

"As a football club, the idea of moving kick-offs is familiar in the live television age, so this will not be a problem for Gary Caldwell and the players. But it is a huge logistical undertaking for the stadium to host both games on the same day and we are grateful to Andy and his staff for their professionalism in accommodating these fixtures."

Wigan Warriors chairman Ian Lenagan added: "The solution is an endorsement of the growing relationship between the two Wigan clubs. Both Wigan Warriors and Wigan Athletic have been working collaboratively to resolve this issue as early as possible."

"We apologise to Wigan fans for this change of timing which is completely outside of our control."

"(We) thank Wigan Athletic, Hull KR and Rochdale AFC for their co-operation and positive assistance in allowing the match at least to take place on Easter Monday rather than at another venue or being postponed."