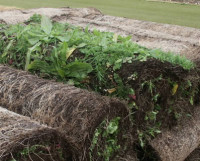 Ashe Warren Farm in Hampshire is a 700 acre arable farm on land situated between Winchester and Basingstoke and, like many farmers, diversification was thought to be the only way forward if the farm was to survive and thrive. James and his father had always had an interest in turf and did an enormous amount of research worldwide on the current markets in this field.

There are many turf producers, but the Hewetson-Browns found a gap in the marketplace, using a compost 'mat' as the growing medium, instead of losing a layer of top soil with every harvest. They took this concept much further, developing this unique soil-less Wild Flower Turf, which is now the focus of attention for all those that are looking for biodiversity, low maintenance and speedy establishment in their turf needs.

Things have progressed a long way from those early days, with modern technology now mechanising much of the work, resulting in the creation and development of specialised harvesting methods and equipment. The whole process is now much less labour intensive and business is booming.

Wild Flower Turf is now becoming the fastest growing medium in the UK for diverse uses such as landscaping projects on domestic and commercial sites, as well as civil engineering schemes and green roofs. Ashe Warren farm is the supplier to many outlets in the UK for this specialist turf and thought to be one, if not the only, producer in the world, so there is something really special happening here in Hampshire.

This breakthrough in technology is the result of a combination of soil-less turf with native wildflower seeds, grown on a compost bed. The seed mix has been designed to give a high proportion of flowers as opposed to grasses, with a 50%/50% mix unique to this farm, allowing the flowers to flourish.

dvanced research and many trials have resulted in an easy and guaranteed way of establishing a wildflower meadow, with this specialist seed mix acting as a weed suppressant. The production process does not require the turf to be cut, so the root structure remains entirely undamaged ensuring an 'instant' green turf when laid. Best of all, this is a turf that requires very little maintenance.

It cannot be emphasised enough how much work went into this development. The Hewetson-Browns had to design and create everything from scratch, because they were the pioneers in this marketplace - no one had ever grown this before. Hence all the tools and machinery to harvest the turf have been developed by the family and are totally unique. Major projects had to be undertaken.

For example a sustainable water supply was essential, so a reservoir was built and its banks are covered with Wild Flower turf in all its glory. The family are still continuing to experiment today with new combinations being developed as we speak. These currently include herb turf and camomile turf - one can almost smell the scents already!

The recipes are a commercial secret but the uses are wide ranging and clients too numerous to mention. Prestigious contracts abound, but to give a few examples:- house builders Wilson Homes used this turf to fulfil the Environment Agency's exacting requirements; 2000m2 was supplied for Normand Park in West London; and Wild Flower Turf was used to line the banks of the Jubilee river project in Windsor.

This turf is also in use for a number of green roof projects by architects, who were delighted to find an alternative to the sedum mat, with Wild Flower Turf providing greater bio-diversity and colour and even perhaps more importantly the use of UK provenance seed.

Other markets include landscaping, personal gardens, film sets (including turf for all the Harry Potter films), exhibition stands (supplying Chelsea, Hampton Court and Malvern garden shows) and for use in advertisements.

A major plus is that this turf ticks all the environmental boxes, particularly in the case of green roofs, as they absorb carbon dioxide, give out oxygen and by their ability to absorb 80% of rain water run off, reduce the danger of flooding.

The farm has now expanded this specialist turf to such an extent that it needed to convert more arable land into turf beds to cater for the local, national and sometimes international demand. The farm is in the midst of converting a further 8,000 square metres. This turf only takes ten to twelve weeks to grow from seeding to harvest, so they are able to reap two crops a year from the land, a rare occurrence for a 'crop' in the UK. There are big plans in the pipeline for further expansion of this very exciting project, with so many applications and in this more environmentally friendly conscious world, Wild Flower Turf has proven to be exactly what everyone is looking for.

James Hewetson-Brown said, "These are exciting times and it is very gratifying and satisfying to see the outcome of years of development turn into such a great business, bringing colour, birds and butterflies back into our gardens, parks, cities and countryside".

He added "I would like to say that I have found the support meetings and e mail briefings that the CLA holds particularly useful and knowing they are there to help at any time gives us an added feeling of security in this ever changing world of rules and regulations."

For further information ring James on 01256 771222 or go to www.wildflowerturf.co.uk