0 Wildflower meadow is a natural beauty 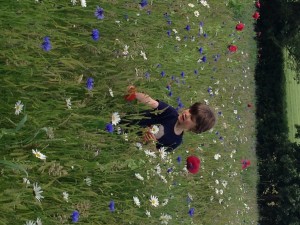 One of British Seed Houses standard wildflower mixtures, 'WFG4 Neutral Soils' with the addition of meadow vetchling and cornflower, was sown in September 2012 and its debut flowering made a big impact at the privately owned property.

"It was fantastic, absolutely amazing, and the cornflower did particularly well. Richard Brown from British Seed Houses advised on the mix to be used to suit the soil type and aspect and we certainly achieved the effect we wanted. Everyone is over the moon," James explained.

The next step is to add more cornflower as part of autumn maintenance as James is keen to build up a seed bank of this annual species.

The meadow complements the formal and classic style country gardens at Harefield House.

Glyphosate was used in April 2012 over the whole area to kill the weeds and the site was cut back throughout the summer and chisel ploughed so the weeds could not get a hold.

After cultivating it clean throughout the year it was power harrowed before the wildflower seed mixture was sown with a hydroseeder.

It was subsequently ring rolled twice.

This year field workers were recruited to hand pull the sow thistle and spear thistle which was then removed off site.

After flowering, the meadow with its mix of red, white and blue flowers, will be mowed at the end of August/beginning of September and hay cropped and baled.

Richard Brown, Amenity Sales Manager at BSH, said: "We are always happy to give specialist advice to our clients and to hear of such successful outcomes. We are continuing to advise James as he wants to develop and improve the meadow.

"BSH has supplied a comprehensive range of UK native wildflower mixtures for more than 25 years. Our 'WFG' range of mixtures is designed to suit soil types and aspects, is very user friendly and helps both landscape contractors and domestic users to easily identify the correct mixture for themselves.

"In addition we have our 'RE' Regional Environmental range which is targeted to specific areas and replicates the most common national vegetation classification. It is particularly useful for landscape architects and ecologists."

Richard added: "We can easily provide bespoke mixtures on request or a mixture of the two.

All the wildflowers in our mixtures are UK native species and sourced in the UK. We also do two mixtures that contain non- native 'garden species' that particularly benefit bees and pollinators. All our mixtures have been endorsed as 'Perfect for Pollinators' by the RHS."

Generally speaking wildflower mixtures can be sown all year round, but not in periods of extreme drought or waterlogging, and ideally sowings should be made into clean, weed-free ground.

Wildflower areas need to be maintained if they are not to turn back into rough grassland and a cutting schedule that maintains a good diversity of species is essential, Richard advised.

A full range of Wildflower Seeds are available from the Pitchcare Store.