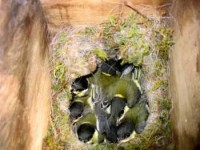 As a keen birder & general wildlife enthusiast it is a pleasure (most of the time!) to work outside. It is not often you are able to combine your job with your favourite hobby.

I have been working at John O`Gaunt Golf Club, near Potton, for 13 years. We have 2 x 18 hole courses with a wide variety of tree & shrub species, young and old, and a brook running through the old course. Over the years I have built up a list of bird species seen on both courses, also mammal and butterfly lists. Some birds of particular interest - a Kingfisher is resident on the old course and can be seen at any time; Hen Harrier and Red Kite have been seen on a few occasions; Butterflies - White Letter Hairstreak seen once on the Carthagena course; Mammals - Water Vole & Muntjac Deer.

In addition, an A-frame box was erected in 1996 for a barn owl. It was nested in for 2 years then the owls left and the following year it was used by a pair of kestrels. Now jackdaws are using it. An open fronted box for kestrels was erected in the same year; it was not used for the first 2 years but since then it has been used every year except one. The kestrels usually raise about three young. In 2004, they raised 4 young. A second open-fronted box for kestrels was erected in early 2003; the kestrels visited the box but did not nest in it.

Some of the small boxes used on the course have 25mm holes for Bue tits and maybe Coal tits, and 32mm holes for Great tits, Nuthatch, Sparrow and also Blue tits, and an open fronted box for the Robin.

All the small nest boxes were made using exterior plywood purchased by the club. In September 2002 some bird feeders were put up. They were placed outside the conservatory so members could easily view and enjoy them. The feeders have proved a huge success with 17 species seen around them so far. There are 4 feeders in total, 2 containing a normal seed mixture (hi-energy feeder seed), 1 contains Nyjer seed to try to attract goldfinches and 1 contains nuts. I put extra food out in the winter, such as fat balls. 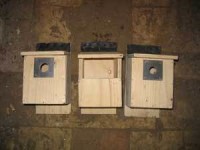 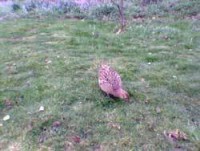 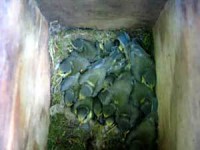