1 Will it take hose pipe bans and Drought Orders to see legislative compliance? 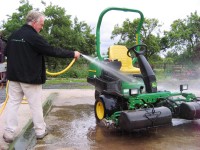 The duties and responsibilities of anyone operating a washdown system, the legal requirements and the latest penalties for non-compliance have been covered at length in the media for some time. Yet, still, a number of businesses and golf clubs don't see the need to take action.

Why? The Groundwater Regulations 2009 are not a recommendation, they are law. Compliance is mandatory, and to claim ignorance will not be seen as any defence.
So, why wait for an inspection visit from EA (Environment Agency) officers and possible Civil Sanctions being applied, together with hefty fines? Perhaps the time is right to invest in a biological washpad water recycling system, save precious water and meet your legal duty.

It is only a matter of time before hosepipe bans, implemented on 5th April 2012 by seven water companies in the south and

east of the UK, become Drought Orders. Already the south-east of England and East Anglia are reported to be suffering the worse drought for thirty years. Areas as far north as Yorkshire, and as far west as Wiltshire and Hampshire, could be affected, we are told.

It was in 2006 that Drought Order powers were granted to only three water companies (Sutton and East Surrey Water, Mid-Kent Water and Southern Water) to limit or prohibit non-essential uses of water, and a number of golf courses were badly affected. Only golf courses that recycled water were able to continue washing off machinery.

One such course was Woodcote Park in Surrey using their ClearWater system and featured on BBC TV news. This time, the drought appears to be more serious and widespread. 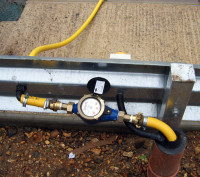 It seems clear that drought conditions, regrettably, are here to stay, probably affecting us each year. Like it or not, we must strive to conserve water, and the sooner the better.

Washing off machinery with water running to waste is not only causing pollution, but is costly and irresponsible in these times. Water meters fitted to recycling installations have shown that around ¼ to ½ million litres of water could be wasted washing down equipment at golf courses, if not recycled.

The National Trust's Andrew Mudge calculated their recycling system at Cliveden would save them in excess of 200,000 litres of water. Installing a biological recycling washpad system would, therefore, appear to be a sensible move right now, especially as there are special offers to be found from the major players.

Often, the expense of a completely new washpad can be saved by upgrading an existing one too, and finance is usually available. Self-installation is possible also in some instances.

Further savings can be made if purchasing approved systems. A system approved and on the UK government-backed Water Technology List (WTL) qualifies for 100% first year capital allowance under the ECA (Enhanced Capital Allowance) scheme. This means that companies/clubs buying

and installing such a system can write off 100% of the total cost of their investment against taxable profits in the year of purchase! One club, for example, recently recovered £3,300 by buying a system and making a claim.