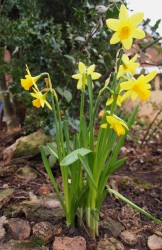 The Woodland Trust is asking the public to report observations of the effects of the milder winter weather on native trees and flowers across the country. This follows a number of anecdotal reports of flowers blooming and native trees bursting their buds weeks ahead of schedule. The last three months of 2011 only experienced four air frosts in the Central England Temperature Series1, compared to 35 in 2010, and an average of 15 in the period 1878-2010.

The conservation charity has already received evidence through its "Nature's Calendar" website of snowdrops and daffodils blooming, as well as silver birch, oak and hazel trees' buds bursting. Data recorded by the public will add weight to the Trust's already vast resource of information on how trees and woods play a role in the natural environment, supporting its goal of creating a country rich in native trees and woods.

Dr Kate Lewthwaite from the Woodland Trust said: "Our native plants and trees are great indicators of wider changes in the natural world. By recording budburst and flowers blooming the public can help us determine whether these changes are having a major effect on how Mother Nature functions. Despite what people may think, in recent years it has become more commonplace to see daffodils and snowdrops in late December and early January as the climate warms." The Trust is gathering data to assess the arrival of spring in comparison to previous years, to analyse whether the trend of native flora appearing earlier will continue in 2012. Early flowering species such as snowdrop and lesser celandine are particularly useful in giving an indicator of climactic conditions. The Trust is also looking for evidence of frogspawn to see whether frogs are being fooled into spawning early; as if this was followed by freezing weather it could lead do frozen spawn in ponds up and down the country.

The charity is currently embarking on a project to plant six million trees to mark The Queen's Diamond Jubilee, it hopes that the creation of new native woodland will increase diminishing wildlife habitats and provide more stable environments. The public are asked to find their nearest wood and information on how to record at VisitWoods.org.uk

Pictures courtesy of WTPL and were taken by John Newson (Daffodils, top picture), and Margaret Barton (Frogspawn, bottom picture). Click on the images for greater detail.

1Central England Temperature Series - The CET dataset is the longest instrumental record of temperature in the world. The mean, minimum and maximum datasets are updated monthly, with data for a month usually available by the 3rd of the next month. A provisional CET value for the current month is calculated on a daily basis. The mean daily data series begins in 1772 and the mean monthly data in 1659. Mean maximum and minimum daily and monthly data are also available, beginning in 1878.