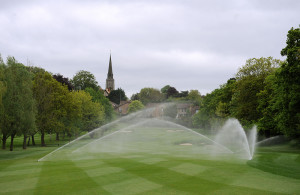 The 18-hole course is now enjoying all the benefits of its new irrigation in the aftermath of last year's record rainfall - and in the face of this year's unusually dry conditions!

It's something that, as car park hosts for the adjacent Wimbledon Championships, Dave Langheim, course manager and a BIGGA Certified Master Greenkeeper, says has been invaluable in terms of post-tournament recovery.

"Maintaining a first-class golf course for our customers all year round is of paramount importance and the main reason we invested in the Toro Lynx and GDC system.

It allows us to balance efficient irrigation and water conservation - a high priority for the club - with time, labour and electricity usage, but it also enables us to speed up the recovery of the course after Wimbledon."

The post-tournament renovations are a major challenge for Dave and his team each summer, with last year's record rainfall making the renovation all the more difficult. Dave however credits the new irrigation system with helping speed up this mammoth task.

"We were hit very badly last year by the tournament. Normally we shut down for a week beforehand, the two weeks during and one week after.

But last year we were two weeks closed after because of the weather and it was the end of August before we were back to normal.

During September 2012, the irrigation was used in the reinstatement of the newly-laid turf to help us speed up recovery."

This year's historic tournament, won by Andy Murray, was one of the busiest events yet with over 2,000 cars, 45,000 people and a stream of machinery and contractors setting up structures and walkways at the prestigious south-west London club.

Dave says: "There's no two ways about it, this system is fantastic. The turf was particularly stressed after this year's tournament - it was pretty dry and saw a lot of traffic.

But once again the Lynx system proved its worth and got the club back up to its usual standards quickly and with minimum fuss. As result it also made our jobs here so much easier!"