Wimbledon ranks as one of the most iconic sporting venues in the world. Just a mention of 'The Championships' has every tennis fan buzzing with excitement.

Later this year, there will be a new man in charge of the hallowed turf, as Neil Stubley takes over the reins, but not before the outgoing Eddie Seaward notches his twenty-second year in charge.

As well as Wimbledon fortnight, the duo are also tasked with preparing the venue for the 2012 Olympics tennis tournament - which begins just three weeks after The Championships have finished.

This will be a remarkable year for everyone at Wimbledon, especially the groundstaff, who will face some unique challenges when they have a double header of world class tennis, beginning with the All England Lawn Tennis Championships from 25th June until 8th July and, just three weeks later, providing the venue for the 2012 Olympics Tennis Event.

This summer's events will also be the swan song of Eddie Seaward who, after a very long and distinguished career as Head Groundsman, finally heads off for a well earned retirement at the end of the summer.

Neil has worked with Eddie for seventeen years, and both have been instrumental in developing and improving this iconic venue in terms of meeting the demands of modern day tennis tournaments.

The Olympic Games tennis starts on Saturday 28th July, just twenty days after the final ball has been hit in The Championships.

I caught up with Neil at the beginning of May to find out more about their preparations and how the groundstaff intend to get the courts back up to standard in such a short space of time.

"Most of the wear will be on the base lines and through the centre," explained Neil. "So, it will be all about getting grass cover back on the courts as quickly as possible. Eddie and I have, for the last two years, been trialing a number of grass seed cultivars and perfecting renovation and repair techniques to find the best combination to meet our requirements."

"We've been using a Limagrain dwarf ryegrass seed mixture of Venice, Pontiac and Melbourne for the past two seasons, which gave us the desired results in terms of good winter colour, quick germination and good vigour."

"As with any natural turf playing surface, its performance will be influenced by our own experiences. By that, I mean that Eddie and I know our surfaces and how they react in any given situation, but this double header will test our skills."

Each grass court at Wimbledon is built to an identical specification, having a specific depth of soil profile overlying a gravel raft that is served by a primary drainage system. The clay loam soil has been specially blended for the club

"The key to success started with the renovation work last autumn. Getting this work done efficiently and consistently has a bearing on how well the courts are likely to perform this year," continued Neil.

"Renovation to the Centre Court and No.1 Court began immediately after last year's Championships and, on the other courts, during August and September as they were taken out of play."

"All the courts are treated the same," explained Neil. "They get a good soaking, and are then fraise mown taking off the top 10-15mm of vegetation, leaving the soil surface to be power harrowed, re-levelled and seeded in several directions. Germination sheets are applied to speed up germination rates, with the grass showing after just a few days. We ended up with good even grass coverage, which was helped by a reasonably mild winter." 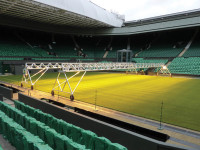 "We have also purchased a set of lighting rigs, which have been specifically designed to span the entire width of the court, giving a seven metre throw of light. It takes six moves to cover the whole court, leaving the lights in a set position for at least two days at a time, so it takes, on average, a fortnight to complete each cycle. They have certainly helped maintain good grass cover and improve growth in shaded areas during the winter, especially on the 'stadium' courts."

"All courts are kept at a mowing height of 11mm through the winter months, with the exception of Centre and No. 1 which are kept at 13mm."

"We feed the courts to maintain colour, as we get a lot of visitors coming to our Museum, and on tours, who want to see them, so it is important they are always well presented. An enclosed viewing platform has been constructed looking down on Centre Court."

The wet and cold weather during April and most of May had put the preparations back by one week. I had arranged my visit to coincide with the setting up of the courts for their initial marking out. However, the weather had put paid to this and Neil and his staff were hoping to begin work the following week.

Yet, the courts, as you might expect, looked immaculate, and were being mown every other day. As The Championships draw near they will be cut daily, with the aim of gradually getting down to the match height of 8mm for when members begin play in June.

"All the courts are hand mown, using Toro G1000s," explained Neil. "But, we have been trialing Toro's latest battery powered cylinder mower. It is very quiet, and we will use it on certain courts during this year's Championships. The battery lasts about eight hours, allowing us to cut a number of courts before re-charging. I have to say, I'm pretty impressed with its performance. It weighs about two kilos more than the petrol models, but handles just as well." 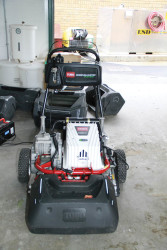 "Quite often, we have to turn off our mowers when a media interview is being conducted courtside, so an additional benefit of the battery powered mower being so quiet is that, this year, we may be able to carry on mowing whilst an interview takes place."

"At this time of year [May], the courts are usually re-marked every two to three days, depending on the weather. During The Championships, we mark out every day, and the process is usually repeated over forty times for each court during the course of the season, although it will end up being over sixty times on some courts with the addition of the Olympic event!"

Thirty-six staff will be working at this year's Championships, with an additional three coming in to help out during the Olympics. The complement of staff is made up of sixteen full-time groundstaff, five seasonal experienced tournament staff and fifteen staff who start in April and work through to October.

"It is important that they all get on well. The hours are usually very long, especially during The Championships, often coming in at 6.00am and not leaving much before midnight. Having the extra three staff this year also allows me to programme in some days off."

Even with the threat of hosepipe bans, Wimbledon will be allowed to use hosepipes and sprinklers on their famous grass courts; "but we will be reducing the amount of plants around the courts to help cut back on water usage," explained Neil. "A large number of hanging baskets have been replaced with tubs and beds, planted with more drought-tolerant varieties such as lavenders, salvias, grasses and agapanthus, replacing the traditional hydrangeas and petunias."

Eddie and Neil have spent the last two years conducting trials, in conjunction with the STRI, to find the best renovation techniques for repairing the courts within a twenty day window.

The trials consisted of twelve different formulations of seeding and feeding regimes using both granular and liquid feeds, with some being mixed with PrimoMaxx.
"It was an interesting exercise," said Neil. "We saw a marked difference between pre-germinated and normal seed, and also noticed that granular fertiliser, whilst delaying initial establishment, drove growth better towards the end, whilst liquid feeds aided early establishment, but only for limited duration. We found neither benefit nor harm from PrimoMaxx in this situation."

The end result is that, as soon as those courts required for the Olympics come out of play towards the end of the Wimbledon fortnight, Neil will begin the renovation technique they identified as being the best. "Basically, the courts will be flooded up, the base lines lightly gradened, topdressed, luted and oversown with pre-chitted grass seed, covered with germination sheets and fed to encourage rapid establishment."

"The weather will play an enormous part in the success of these renovations," said Neil. "But, our trial runs have given us excellent results, and Eddie and I are confident we will be able to deliver the courts at their best for the Olympics event."

The double header events are the perfect way for Eddie to draw a line under such a distinguished career in our industry, and for Neil to take over the reins at one of the world's finest sports venues. 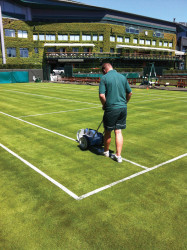 Marking out, as described by one of the Wimbledon groundstaff

Start with your two post sockets. The distance between them is 42ft. Measure between them and mark the middle - that is the centre of the court.

Measuring from the centre in each direction, mark out the outer box of the court with string (the Wimbledon groundsmen use a special orange one). The width is 36ft, so insert two pegs - A and B - 18ft either side of the centre mark. Measure 53'1" from A along the diagonal, and 39ft as the length, pulling both tapes taught - these will meet at C, the corner of the court. Reverse to find point D. The length between C and D should be 36ft. You now have one half of the box. Repeat on the other side. Wimbledon groundsmen always double and triple check!

You can now paint the lines of the box. But, and here's another thing you might not have known, it's not actually paint! We use a transfer wheel marker (or roller) to apply a white compound that contains titanium dioxide to make it durable. All the lines are 50mm wide, except the baseline, which is 100mm. As you can imagine, we get through a lot of this stuff - about 500 gallons each year!

Depending on personal preference, we use the string as a guide, walking along with the wheel marker, slowly and carefully, either to the left or right of the string. Each line is rolled just once, we don't go over and over.

The tennis event of the 30th Olympiad will be held on the lawns of The All England Lawn Tennis Club at Wimbledon, for nine days from Saturday 28th July to Sunday 5th August 2012. The event is organised by the London Organising Committee of the Olympic Games (LOCOG), working closely with the International Tennis Federation, on behalf of the International Olympic Committee (IOC).

Tennis has long been associated with the modern Olympic Games, reaching back to the beginning when the game was one of nine sports being contested. Tennis continued to be a contesting sport up until after the games of 1924, when the International Tennis Federation could not reach agreement with the IOC over the amateur question and general management of the tournament, which resulted in tennis being side-lined for sixty-four years until 1988.