Wimbledon moved to reassure players on Wednesday that its first-week courts are perfectly playable, on another day of tumbles at the All England Club.

There was thankfully no repetition of the injuries that put Serena Williams and Adrian Mannarino out of the tournament - although even athlete supreme Novak Djokovic struggled once again to stay on his feet at times.

The event on Wednesday sent a communication to the men's and women's player associations setting out their position on court surfaces. Head groundsman Neil Stubley answered questions about the effect of the roof and the fundamental one about whether it was safe to play.

'Absolutely,' he replied. 'Because it's a natural surface there is always that risk of slipping. I think because we are not getting that wicking effect from the air movement from the wind in the first few days, it's just taking a little bit longer for that process to happen.

'We always go into the championships with a percentage of moisture that sits within the plant and soil for the courts to last for the whole duration.

'Normally what would happen as the first few days pan out, the moisture starts to be drawn out and the leaf will naturally start to harden up.'

Despite his slips, Djokovic was not too alarmed. 'I didn't have Serena's and Mannarino's retirement in my head, even though that's very sad to see,' said the world No 1. 'I definitely had a very close contact with the grass in the first match and also in the second one. A few falls, maybe more than I would like, I'm still adjusting my movement.'

Beaten 2019 US Open champion Bianca Andreescu, notably far less experienced on grass, was not so relaxed, saying: 'I actually slipped six times as the courts are pretty wet.

'I felt the ankle for two or three points but then it went away. I don't think the court impacted my game but they are super slippery.'

The preparation of the surfaces is a rare intersection between Wimbledon being an elite private club and the host of a major international championships. 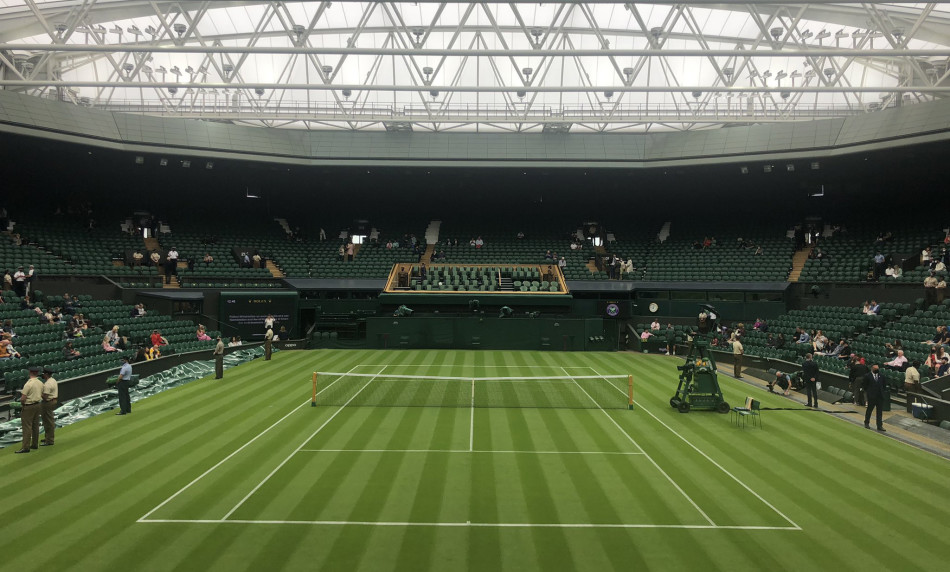 On the Saturday before the tournament, tradition has it that the members, often quite elderly, take to the courts for some social doubles to play the surfaces in and also test such things as scoreboards and the sound system. The question might be raised as to whether this is sufficient to ready them for the best players in the world.

After all, Wimbledon itself says grass court technology has now moved on sufficiently to allow them to play 14 days straight. It is one reason given for abolishing the fallow Middle Sunday from next year - that it is no longer needed to sustain the courts for a fortnight.

The groundstaff believe the social warm-up is still enough to break the courts in.

The likes of Tim Henman and Boris Becker were quick to point out on Wednesday that having to get used to virgin grass courts is nothing new.

In 2017, the courts were criticised, but 2013 was probably the most controversial of recent times. Caroline Wozniacki and Victoria Azarenka both suffered ankle injuries, while Maria Sharapova described the courts as 'dangerous'.

The situation has doubtless been exacerbated by having roofs on the two main show courts. Sometimes their use is for scheduling purposes, with the All England Club's desire to turn the event into a full scale day-night tournament evident.

Back in 2012, when roof decisions had a bearing on big matches, chief executive Richard Lewis repeatedly emphasised that Wimbledon was an 'outdoor daytime event'. You do not hear that very often now.

What Wimbledon are adamant about is that the surface has not changed in the way that it did in 2002, when 100 per cent rye grass was seeded to slow the ball.

Henman, doubling in his role as a BBC analyst and club committee member, said of his involvement as an administrator: 'In those 13 years the preparation of the courts has been absolutely identical. The one thing that has been different this year is the weather in the lead-up to the tournament.'