Now into his third decade as Wimbledon's wizard of the grass, London resident Eddie Seaward has been grooming the magic carpets of the All England Lawn Tennis Club since the heydays of Steffi Graf and Pete Sampras. 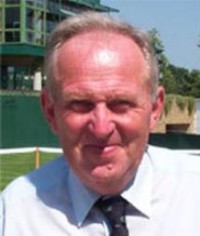 To the naked eye, his influence is difficult to detect; to the finely-tuned eyes of a touring tennis pro, the subtleties are immense.

Casual observers might think that Seaward is little more than a man with a shed full of Toro lawn mowers and some fertilizer at his disposal, but in addition to overseeing the upkeep and health of 19 grass courts for tournament play (and another 22 for practice), the seventh Head Groundsman in Wimbledon's history has facilitated changes that have influenced the way that the Wimbledon grass plays, and the types of players that can have success on the surface.

Seaward, who lives three miles from the grounds and has taken to walking to work for a heart-healthy commute, spends much of the week prior to Wimbledon mingling with top pros and coaches who've arrived early, comparing notes and taking the "pulse" of the grass. Over the course of his 20-plus year tenure, he's developed a good rapport with Wimbledon's cast of characters, and more important, he's made good use of his research.

When a new generation of hard-hitting big servers reduced grass-court tennis to ace-a-thons in the early '90s, Seaward was paying attention.

"Everybody was saying grass courts are dead because they're too fast and it just favors the player who's got a hard serve," Seaward says. "I spoke to the coaches at the time and said, 'Well, OK, what do you want?' And so they told me."

The results have been favorable for the majority of the players. "Hopefully we've achieved that because we're getting greater rallies now just by slowing the courts down a little bit," Seaward says confidently. "Most players are liking the courts the way they are."

Seaward's meticulous research has helped usher in a form of grass-court tennis that meshes very well with the game of the modern baseline player. Due to the 100% perennial ryegrass seed that has been in use at Wimbledon since 2001, the soil is drier, thus harder beneath the feet. This makes balls bounce higher, and the perceived speed of the court slower.

The previous mix (70% rye and 30% creeping red fescue) had become vulnerable to wear, and the switch was made by Seaward and his crew in order to ensure the playing surface could withstand the increased foot traffic of the modern game without splintering into patches that would cause unplayable bounces.

"The grass itself is slightly better wearing than a lot of the fescues were, so you get a little better grass coverage on the court at the end of the day," Seaward says. "It also creates a slightly thinner soil, so there's a little bit air movement between the leaf, which then dries the soil and makes it harder."

As he approaches 70, Seaward is beginning his penultimate Wimbledon. He'll give way to his understudy, Neil Stubley, after the SW19 site hosts its first tennis matches at the 2012 Olympics. Until then, he'll keep walking his three-mile walk to the grounds, arriving at his dream job at tennis mecca with a lather of perspiration already brewing.

"The walk is tiring, but you get used to it," Seaward says, "and with the traffic in London it's actually sometimes quicker to walk it than it is to drive."

Will Seaward still visit the Wimbledon grounds when his tenure is up? He's not so sure: "As a spectator maybe, but I wouldn't say anything else. It would be unfair on Mr. Stubley to be looking over his shoulder every five minutes. He's very capable of doing the job."

Read the full article here - www.usatoday.com
Wimbledon grass stats
•1 ton of grass seed used each year.
•3,000 gallons of water used during the fortnight.
•Courts mowed every day to a height of 8 mm.
•160 court coverers on staff.
•22-28 seconds: time it takes to cover one court.