Attention to detail and a 'fine turf mentality' amongst the grounds team are reaping benefits for trainers running their horses at Wincanton Racecourse.

Deep in rural Somerset, Wincanton is in the prime catchment area for National Hunt's leading names, such as Paul Nicholls, Colin Tizzard and Harry Fry, whilst jump racing's pulsating heart, Lambourn, is a short trip away along the A303.

As the sport reaches fever pitch in the run-up to the Cheltenham Festival, racegoers scan the fields at picturesque Wincanton for clues to winners in the big races - February's Kingwell Hurdle often giving pointers to the Champion Hurdle.

The Boxing Day meeting is the local highlight, with a crowd of 9,000 doubtless enjoying the bracing Somerset air as much as the racing programme, whilst November's Badger Ales Day celebrates one of the longest sponsorship in the sport. 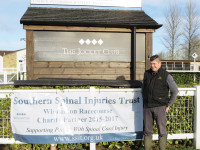 For head groundsman James Martin, seeking to improve the racing surface on the tight budget afforded to smaller racecourse uses many of the skills he honed as greenkeeper of Wincanton Golf Course, a nine-hole course in the centre of the track.

"I came here as a groundsman, then moved onto the greenkeeper's role before taking on the job of head groundsman," he explains.

James works closely with Matt Clements, appointed as greenkeeper in 2015. "We share some machinery, such as using the fairway mower to stripe up for prestige meetings, whilst our Progressive course mower can cut the roughs on the golf course," he explains. "However, it's difficult to purchase machinery with both in mind - I need large scale commercial machines, whilst Matt needs fine turf equipment."

There are some other benefits from the tie up with the golf course - Golf Pro Andrew England owns another local course which will hire some of its machinery to Wincanton. 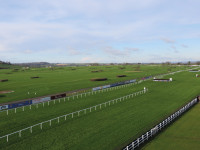 "There's the Verti-drain for example, although it's a bit small for the racecourse, except on the bends," points out Matt.

James's two full-time groundsmen also help out on the golf course, whilst Matt will lend a hand at busy periods in the racing calendar.

He also uses the golf course sprayer to apply trace elements to the parade ring and lawn turf at the end of a tank load applied to the greens.

"We tried to set specific days to work on the racecourse or golf course, but find it's better to help each other out as and when required. The only time that it gets tight is when we are watering for racing and Matt needs all hands on deck for spring maintenance!" says James. "We do have casuals that we can call on, which helps."

James and his team are responsible for the entire site totalling 210 acres, which includes extensive grass car parking areas. These are currently under-utilised, he suggests, although a plan for an equestrian training area is under consideration. 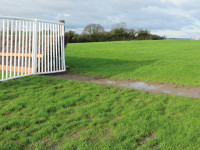 Staffing is an issue that will come under the spotlight of new General Manager Huw Williams, who recently moved to Wincanton from Warwick, and Matt is hoping to propose the recruitment of an apprentice to join the team.

Apart from its location, Wincanton's trademark is the test of good jumping that it provides, earmarking future stars of the sport. "But it's important that the fences are safe and encourage horses to jump well, so we work closely with the British Horseracing Authority to make improvements," comments James.

In recent years, this has included a move to portable fences, which are moved across the track by six metres after six meetings to give fresh ground and then moved back again after a further six meetings.

The fences themselves have also been modified. "We've added more brush higher up the front face of the jump to encourage the horses to take off in the correct place," he explains. "The open ditches have also been upgraded with green astroturf over straw bales at the back of the 'ditch'; the take off board has also been moved in 8in from the BHA's recommended maximum width." 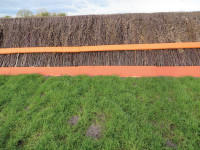 Whilst the course is largely free-draining, with strong winds drying out the ground quickly, it is located in one of the wettest parts of the country and the use of the two running lines for the steeplechase track and pushing the bends out by 1m each meeting helps to give the best ground.

At the other end of the weather scale, mirroring the chase course with the hurdles means that the Briggs irrigation boom can cover both courses in one run.

James cites quick track repairs as equally important. "After each race day, we dig, lift and tread the divots straight away and then slit or roll before filling divots."

Particular attention is given to jump take-off and landing areas which are never rolled. "We also use a specific fertiliser programme on these areas." 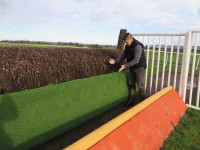 Racing takes place from October to May, so in summer the sward is cut down to 2in before being allowed to grow up to its racing height of 4in from August.

Fertiliser is applied in a 5:5:25 blend in September, with the take-offs and landings getting 6:8:16, followed by 0:0:27 in November. "We also overseed and dress these areas using a racecourse specific seed and a 70:30 soil/sand dressing in the summer."

At the end of the season, James will verti-drain and apply a 16:5:5 fertiliser blend to the take-offs and landings to take them through the summer.

Last year, renovations to the parade ring saw Soft Surfaces rubberised tarmac added in a large semi circle in the winner's enclosure. "Horses are constantly being washed off and turned around in this area, which cuts up the turf and turns it to mud, so the new surface has made a big improvement to its appearance and safety," comments James. 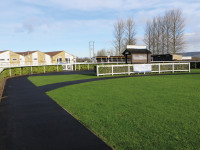 "We also strip and refill all of the fences in a two-year cycle through the summer - I'd like to do them all annually, but the cost is prohibitive, and we repair all of our hurdles in-house. In 2015, we purchased twenty-five new hurdle sections, and I aim to keep ninety sections available for use."

Budgeting and machinery supply is an area that James and Matt are studying closely. "We have powerful tractors available through Jockey Club Racecourses' agreement with John Deere, so it makes sense to use tractor-drawn equipment such as the Progressive mower, even though, in an ideal world, I would prefer a large ride-on rough mower to share with the golf club," says James.

"However, the lease agreement for the tractors gives us fixed costs and a planned replacement programme, so I believe that it is the way forward. The 950R ride-on mower that we have from John Deere is one of the most useful pieces of kit on the racecourse - it is used to cut the take-off and landings, works on the golf course, mows the caravan park and stripes up the parade ring and lawns."

"We would love our own verti-drain," adds Matt, "as we could then use it more regularly, and this might be a suitable candidate for a lease package."

James feels strongly that a 'fine turf' approach is the way forward in racecourse groundsmanship, and that larger racecourses, such as York and Sandown, are making great strides by using the latest turf renovation equipment.

He says: "There's still a decidedly agricultural approach on racecourses, but it is improving. And, even on a small course, you can make progress in areas such as take-off and landing preparation. It gets noticed - we have a trainers' lunch here before the start of the season and, on walking the course, one trainer questioned why I had returfed the take-offs and landings as they looked so good!" 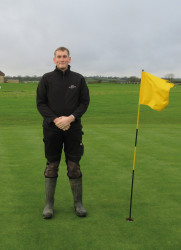 Wincanton Golf Club was established in 1994 and offers nine holes in a links-type environment.

"We can't have any trees etc. to produce a challenge for the golfers because of the need for visibility across the racecourse, so we use the roughs, which are allowed to grow tall in the summer months," explains Matt Clements.

He has also begun a programme of reshaping the bunkers.

"They were mainly large, flat and open, but I have dug two out below ground level, which makes them more challenging, yet easier to maintain."

The course is open year round, except on racedays, and Matt comments:

"Greens are built to USGA specification and are the best feature of the course; most of the land is soil and brash with some clay pockets that don't drain well, and we do get some wet spots on the fairway."

He adds that as the wet areas were 'Shockwaved' last year without success, he is now looking to budget for drainage work to improve playing conditions.

Improvements to the course have been duly noted by the local community, with six new members being signed up in the first two weeks of January.