Members at Abbeydale Golf Club in southwest Sheffield are looking forward to their second season of continuous winter golf, following the installation of a comprehensive, piped drainage system on three quarters of the course's fairways.

"We're clay based and the water just used to sit there," remembers Warwick Manning who has been Head Greenkeeper at Abbeydale for the last two and a half years. "Our main problems were on the fourth, fifth and sixth fairways, and although we have a policy to open as long as possible, in an average winter we'd be closed, or on a shortened course for a month due to water logging, and longer if there was snow." 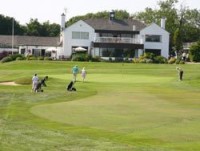 Tony Ollerenshaw, who has been involved with the 75 year old course since 1978, acted as co-ordinator of a project which saw Pugh-Lewis, the Chesterfield based sports ground construction and drainage experts install approx 8 miles of piped drainage, last autumn.

"A significant proportion of our 650 members are retired," he says "and they expect to play 3 or 4 times a week, whatever the season. Golf is an important part of their lives."

Pugh-Lewis, who employed their Mastenbroek chain trencher to complete the job in eight weeks, have recently returned to Abbeydale to work on a holding pond on one of the holes. " Once this pond is fully operational it will enable us to control the water leaving the site," explains Warwick Manning.

"Before the new drainage we were just waiting for nature to take its course. Heavy rainfall in early spring not only halted play, but also stopped us presenting the course, as we would like because we couldn't get heavy machinery on it. We're a very busy private members club catering for a competitive membership. We also host Sheffield and Yorkshire Union events as well as major corporate society days."

Since the new drainage system was completed Abbeydale has closed for just one day due to waterlogging, when torrential storms closed even neighbouring sand based courses.

Pugh-Lewis, are in the process of mapping the scheme for the benefit of future generations, and Tony Ollerenshaw says that the club is now in the position to offer winter golf packages for the first time.

"We're now confident that we can provide winter golf," he concludes.

For further information on the services of J Pugh-Lewis, contact the company on Tel: 01773 872362 or e-mail: info@pugh-lewis.co.uk