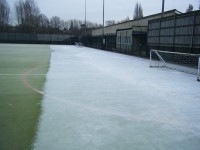 "There is still the mistaken belief that artificial pitches are somehow immune from the elements, with many facility owners and operators caught off-guard each winter"

If maintained correctly throughout its life, an artificial pitch should be playable in most (not all) weathers. However, the one element that such facilities cannot necessarily withstand is a drop in temperature, and the inevitable frost, snow and freezing conditions that ensue.

Indeed, one of the most common questions we are asked during winter is 'how can I defrost my surface?', and there is still the mistaken belief that artificial pitches are somehow immune from the elements, with many facility owners and operators caught off-guard each winter.

Erroneously labelled as 'all-weather', the very construction of artificial pitches puts them at risk when confronted with wintry conditions such as frost and snow. During the winter months synthetic turf retains a large moisture content, which will inevitably freeze, causing the playing surface to become hard and often unsafe to play on. It is not uncommon for an artificial pitch to remain frozen even when surrounding natural grass areas have thawed, due to the low core temperature of synthetic turf and the insulating effect that the infill and carpet creates. 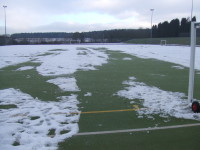 Freezing weather conditions can also put an artificial pitch at risk of seam and inlaid line failure: during periods of extreme cold, the contraction and expansion of the water as it thaws and refreezes will 'blow' the carpet seams and lines in much the same way as bursting pipes. An artificial pitch exposed to freezing temperatures may suffer the effects of weak or split seams, and such areas pose a trip hazard and must be repaired at the earliest opportunity.

An effective solution to the problem of frost is the application of Pure Dried Vacuum (PDV) salt. PDV salt contains few impurities, so is less likely to cause damage or contamination to synthetic turf. Other products, such as rock salt or grit, should definitely be avoided as, once dissolved, they could cause contamination and damage to the playing surface. Chemical-based solutions do work, although they can be costly and offer little in the way of residue life.

"It is a misconception that synthetic pitches don't freeze," explains Richard. "They do, simply because they hold a lot of water. In my experience, if you can keep your pitch well-maintained and free-draining, and don't allow a build-up of water to develop, then by ensuring it is well-salted before an overnight frost, you can help to keep your pitch open for use." 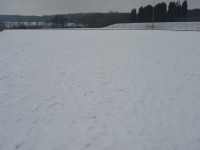 Richard and his grounds team have identified a routine that works for their 3G pitch, whereby they typically apply around one tonne of salt at a time, which is first spread and then brushed into the pitch. During prolonged cold snaps, the salt is re-applied as required, the frequency of applications dependent on the severity of the frost and the level of use the pitch is receiving. Where space allows, a few tonnes are also kept in storage on site for emergency applications.

Richard is confident that taking this preventative measure has enabled the 3G pitch to be played on in conditions where it might otherwise have proved difficult, if not impossible. So, simply by planning a few months in advance and ensuring a good supply of salt is on hand, Richard and the grounds team are doing their level best to keep the 3G training pitch at Bolton Wanderers FC open all year round.

We recommend that PDV salt should be considered a preventative anti-freeze application rather than used as a de-icer, and one application will not necessarily provide a long-term remedy. Furthermore, the benefits of using PDV salt will vary according to the prevailing weather conditions, and results differ from site to site, so cannot be guaranteed.

If left untreated, a pitch that has frozen can be compounded with snow, which will quickly settle on an artificial pitch and remain for a longer period as it sits on the frozen carpet. As with frost, snow often melts quicker on surrounding natural grass and hard-standing areas before it melts on synthetic turf, due to the insulated low core temperature of the surface. 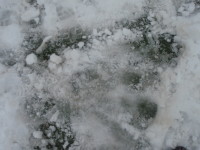 The safest solution for a facility affected by a heavy snowfall is to simply close the pitch until it thaws and becomes safe to use. The alternative - to attempt the removal of snow from an artificial pitch - poses several difficulties: having suitable space to stock large piles of snow; the potential to damage the turf when using snowploughs - particularly if a layer of ice lies between the snow and the carpet; and displacement of the granular infill along with the snow, leaving the synthetic turf fibres unsupported and at risk of increased wear.

If you do consider clearing snow, it is vital that this is done when the snow first falls; if it is allowed to thaw and re-freeze, it will be almost impossible to remove snow or ice without also causing damage to the carpet.

So, whilst snow presents its own unique problems, with little that can be done in terms of preventative measures, identifying and then reacting swiftly to the effects of a heavy snowfall can help get your artificial pitch up and running at the earliest opportunity.

Firstly, the sheer weight of a large amount of snow will inevitably flatten the synthetic turf fibres and compact the infill. This can be remedied with a decompaction once the snow has cleared. A specialist decompaction will both agitate the carpet pile and remove contamination, simultaneously lifting the carpet fibres and loosening the rubber particles that have become flattened and compacted by the weight of the snow. Keeping the pile upright not only protects the carpet fibres from wear, it also preserves the playing characteristics and restores the aesthetic qualities of synthetic turf. Loosening the granular infill, meanwhile, helps to improve drainage and control the feel of the playing surface underfoot, whilst allowing for infill levels to be regulated at repeated intervals. 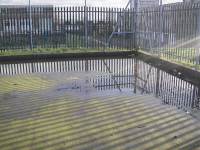 Secondly, in the weeks leading up to a snowfall, dirt, leaf debris and other detritus is also likely to have settled on the playing surface. Such contamination will become trapped beneath quick-falling snow, unable to be removed and so left to decompose into the carpet. As long as the pitch is being adequately maintained throughout the rest of the year, this should not pose too severe a problem, but in all cases it is important to remove any trapped debris by dragbrushing and power sweeping the surface as soon as possible.

Lastly, when the snow does begin to thaw, you will need to ensure that your pitch's drainage system is able to cope with the rapid dispersal of such a large volume of water. This is an important requirement throughout the life of an artificial pitch, but the need for adequate drainage is most apparent during the autumn and winter months, with both an increase in rainfall and the potential for heavy snowfall.

A sand-filled pitch with poor drainage capabilities will display tell-tale signs such as tide marks or silt areas on the playing surface; this is caused by rainwater backing up and flushing out contamination (leaf and tree debris, dirt, broken-down carpet fibres) from the infill, depositing it onto the surface as it drains away. If unattended to, such material is likely to pose an on-going health and safety issue for the users of the surface.

Whilst the same problems with drainage occur on 3G pitches, their symptoms are less visible; the rubber infill retains excess water, similar to a natural turf surface, and a 3G pitch with poor drainage will instead feel soft and 'squelchy' underfoot.

As a corrective measure, a restorative deep-cleaning process will remove the contaminated infill, replacing it with fresh, clean aggregate. Our experience has shown that this method, followed by a suitable maintenance programme, will give at least five years extended life and, in some cases, much longer.

However, the best preventative action to take to avoid drainage issues is to implement a comprehensive maintenance regime on your artificial pitch, ideally from day one. Combining daily and weekly brushing in-house with a regular maintenance programme will help to provide a consistent playing surface all year round.

So, having first determined the key potential problems affecting artificial pitches during the winter months (frost, snow, substantial rainfall), we have identified here the preventative measures that should be taken to either stop them from occurring, or at least to minimise the damage caused. Where preventative measures cannot be implemented, such as in the case of a sudden heavy snowfall, understanding how best to react to the effect it will have on your pitch can help you to reverse its impact both quickly and effectively.

Thankfully, whilst snow can be debilitating to artificial pitches in the UK, it currently poses only an infrequent and temporary inconvenience. Whether that remains the case in the long-term is a topic for debate amongst climatologists, and investigations may well need to be made into the option of under-surface heating, at least for top-level facilities which can't afford to remain unused. This technology is already being employed in Baltic and Scandinavian countries.

As for the more common occurrences of frost and rain, in many cases these should not be reason enough to necessitate a pitch closure. Indeed, with a suitable maintenance programme in place all year round, and the on-hand support and guidance of industry experts, you should find that your artificial pitch can remain fully functional and open for use during the cold winter months.