0 Joseph Dormer gets the 'Blues' 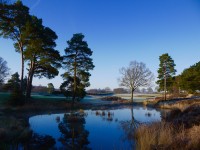 Joseph Dormer, Assistant Greenkeeper at West Sussex Golf Club, is the winner of our final photo competition of the year with his "Blue skies over the heathland".

Joseph receives £100 in Pitchcare vouchers to spend in our online store, and will also be in with a chance of winning £500 worth of photographic equipment.

Runners up were Wakefield Grammar School's Grounds Manager, Bill Settle, whose "See blue sky, see blue sea" was pipped by just one vote, and John Tretheway of Lanhydrock Cricket Club, whose "Robin" fell just three votes short. They will each receive a £50 voucher for our online store.

Congratulations to the winner and runners up!

The winners of the four themes for 2015 will now be judged by a professional photographer and the overall winner will be announced in due course.

Thank you to all those who took part in 2015. We couldn't have done it without you.

We have been highly impressed by the quality of the photos we received.

This was our final photo competition for the forseeable future, but we are planning a few new competitions for 2016, so watch this space.