Following several mild, albeit wet winters, last winter Mother Nature gave us all a timely reminder that periods of prolonged frost and sub-zero temperatures can be just as common. The fact that much of this condition was experienced during the festive holiday break when courses were generally busy did, once again, raise the dilemma of whether or not to allow play on the main greens. This is nothing new but, for many involved in the management of golf clubs, it is a decision that hasn't had to be taken seriously for a number of years, due to the limited number of days when temperatures were consistently below freezing.

In today's ever changing economy, there is a greater need to maximise income allied to the financial pressures faced by many clubs as falling memberships and revenue streams are reduced. So, the question raised is that if greens are to remain in play, will they incur a level of damage that will take time and additional funding to repair, and will this affect future revenue in the Spring? This is at a time when the customer's expectations are higher with the onset of a new season, membership subscriptions are due, additional daylight and, also not forgetting, a certain golf tournament played in the much warmer climate of Georgia. Not a simple decision by any means and one that should form part of the club's overall management policy. How many clubs in the UK have this in place or at least have a winter play policy posted on their notice boards? Probably not many, I guess.

So, let's look at the facts before considering the options. Play on any frozen surface has the potential to damage the grass plant and negatively impact the quality of putting surface. The greater and prolonged the level of play, the greater the risk of damage. White frost, sometimes called a 'hoar' frost, is the most common and consists of tiny ice crystals forming on the surface of the leaves. Footprints or traffic causes the frozen cells to rupture, often resulting in a 'burned' appearance, firstly showing up as being black or grey before becoming brown until regeneration or recovery of the leaf begins. This condition occurs under clear night skies, followed generally by early morning sunshine. Therefore, the white cover of frost seldom lasts beyond mid-morning unless in a shaded environment.

Tree or woodland lined courses are more at risk to a prolonged white frost than those out in the open and free of any shade or restricted air movement. A continuous frost occurs at consistently lower temperatures and directly freezes the leaves of the plant. It is not as visible, but the risk of damage can be more severe since the entire leaf blade can rupture under the weight of traffic.

During prolonged sub-zero temperatures, the plant can also suffer from 'atmospheric' drought due to the plant drying out from a lack of moisture, often accompanied by cold winds and low humidity.

The other main issue is when the ground starts to thaw. Here, the surface becomes soft, wet and, sometimes, temporarily flooded since the underlying soil remains frozen and impervious to drainage. The grass plant is at severe risk at this stage due to the possibility of damage caused by the 'shearing' of the stem caused by the movement of foot traffic over a solid sub-surface. Fortunately, this condition seldom lasts for more than 24 to 48 hours within the UK.

From the above, the greatest potential for damage is during a thaw, but it is short lived. Permanent frost becomes more of an issue the longer the period that the greens remain in this state. A white frost can lead to some 'superficial' damage but, generally, it is temporary and the potential for damage is slight, as long as there are periods of reasonable recovery in between.

The decision on playability should be at the recommendation of the Course Manager on a daily basis, since it is he/she who has the greatest agronomic knowledge of turf management. The General Manager/Secretary should then be advised, although the final decision will rest on his/her shoulders but in line with club or company policy.

Since no two courses are alike, the dilemmas facing clubs will need to take into consideration the following aspects:

Club Types: Public, Member or Resort. The former has the greater potential for revenue loss if greens are not in play and customers are more likely to opt for another venue if this is the case. The potential for damage and lower levels of income in the spring may cancel out the winter gain, therefore careful consideration should be made and the pros and cons considered. 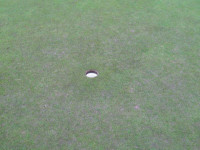 The member club is more likely to protect the surfaces, therefore greens are more likely to be in and out of play but in line with a fully transparent policy.

The resort course, which is likely to charge the highest fees during main season, is less likely to open the greens for play during frost, since poor conditioned putting surfaces could have a negative impact on both the golf course and hotel revenue during peak season.

Grass & Soil Types: To some extent, the differing grass types and rootzones will have varying degrees of tolerance to play on frost. Annual Meadow Grass has a moderate tolerance to frost but has a faster rate of recovery due to its ability to re-colonise. Common Bent has a better tolerance but is slower to recover.
Fescue dominated surfaces albeit likely to be drier, will take a long time to recover from any damage and it is more than probable that the 'open' sward would lead to AMG invasion. Soils tend to be wetter and colder during winter but there is a better balance of nutrients and bacteria to aid recovery. Sands, however, are largely the opposite.

Physical Characteristics: These include green size, access to and from the green, shade, available pin positions, drainage, level of play, sward density and overall turf health. The better these aspects then the healthier the turf and, subsequently, the stronger the surfaces will be to withstand short periods of winter stress. A small shaded green with poor drainage and access would almost certainly be more vulnerable to long term damage if continuous play was promoted.

Public, or daily fee courses, are more likely to remain fully playable in order to attract the green fee player, whereas the club member is more likely to accept moderate levels of protection to the main greens as long as there is a clear and consistent policy. All courses should adopt the two hole system throughout the winter, whereby at least one of the two pin positions are close to the front and side of the green. This effectively becomes a damage limitation exercise, with any resultant harm confined to a small corner of the green. This area can then be renovated via tining, dressing and seeding to aid recovery whilst it is being rested.

Another good idea is for the club to adopt the 'gimme' rule during play on prolonged frozen surfaces. Playing on a frozen surface becomes somewhat of a lottery and should be seen as a game of fun and exercise as opposed to a competitive game. Therefore, any ball lying within one club length of the hole should be a 'gimme'.

The advantages are that the green can remain in play for longer, the pin never needs to be removed from the hole, no putting takes place within the crucial three to four feet of the hole thus avoiding damage, it speeds up play, keeps golfers moving during cold conditions, is fun and can even lead to having more players since it should take about thirty minutes less to play a round of golf.

Another technique to help with conditions of white frost is to apply a dew dispersal agent via a foliar spray. This helps to maintain a dry surface and reduce the amount of frost. It lasts for about ten to fourteen days and has the added effect of reducing the likelihood of disease attack since all diseases of cool season turf require a damp surface.

It should also be noted that within any golf course, there may be areas where micro-climates exist e.g. shaded greens in low lying hollows. Therefore, within a single course, there may be variances as to what greens remain in play, hence the reason why the Course Manager's expertise is essential.

Key points
• Produce a winter play policy as part of the overall plan for the club/course.
• Ensure all the best agronomic practices are carried out to ensure that the turf is healthy, of good root depth, good density and that surfaces are firm and free draining.
• Apply a dew dispersal product at 2 week intervals at key times during the winter.
• Cut two holes per green, one fairly close to the front edge.
• Implement the 'gimme' rule of club length and have this well communicated.
• Prepare temporary greens well in advance, especially on those holes where the greens are shaded.
• Implement good traffic control measures via the use of post and rope around the greens.
• Apply turf products that help to reduce turf stress and aid recovery once the frosts are over. This in conjunction with aerification using both micro and half-inch tines.

With good planning, communication and implementation of best practices, winter play, even during periods of prolonged frost, can be sustainable and without leading to a large loss in income.

Plan for winter well in advance and have a clear policy, fully communicated to the golfers as to when play on the main greens will be permitted.

By implementing the above, the greens are more likely to be in better condition in spring and the club with more money in the bank.