by Chris McCullough
in Tennis and Synthetics
on 17 Nov 2017

Outdoor tennis can be a lonely sport during the winter months but, for one Belfast club, they have got it covered. Chris McCullough headed to the suburbs of the city to meet Ray Downs, the man charged with ensuring that the five artificial courts, and much more besides, are in the best condition possible. 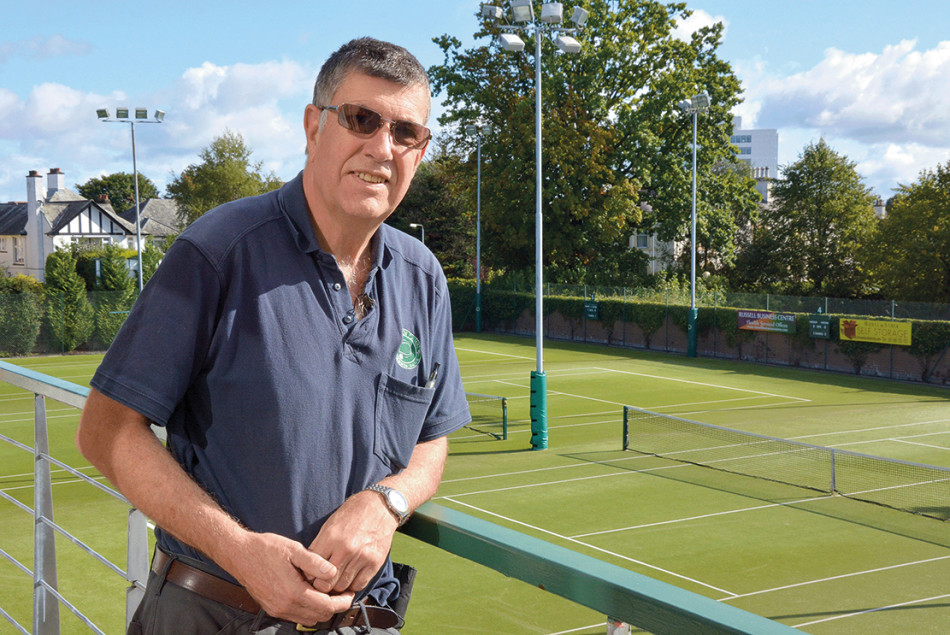 Sitting pretty in a leafy lane right on the edge of Belfast city lies a quaint, privately owned tennis club steeped in over a century of history.

When Windsor Lawn Tennis Club was founded in 1901, all the tennis back then, and for subsequent years, was played on proper grass courts. As time has evolved, however, the grass has gone.

Today, 116 years later, the club is very much alive with around 600 members in total, but tennis is now played on astroturf surfaces instead.

With such a sizeable membership, the club knew it had to offer something more than tennis and, in addition to five tennis courts, it now boasts two squash courts, a fitness suite and a function room.

However, the jewel in the crown for this club is the fact that members can play tennis throughout the sometimes harsh Northern Ireland winter period thanks to a significant investment in a special cover supplied by a Belgian company.

A state of the art 'Super Dome' stretches over two courts (one and two) from the 1st October to the end of March the following year and allows tennis to continue throughout this period in a dry and comfortable environment.

Two generators run 24/7 to keep the dome supported, which are backed up by a standby generator should there be a power failure. Dehumidifiers are also placed within the dome to maintain a more pleasant environment in which to play tennis. 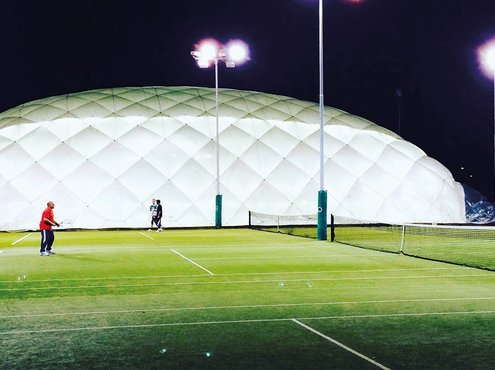 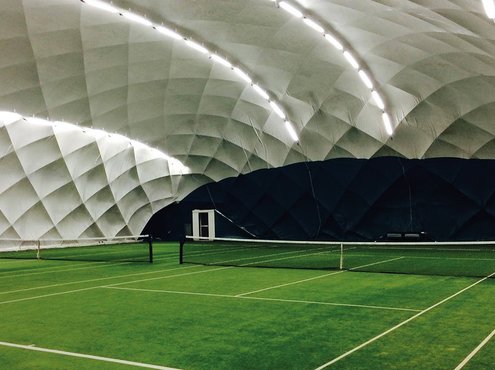 This investment gives Windsor Lawn Tennis Club the edge on other clubs in the vicinity that cannot open during poor weather in the winter.

As a modern facility, Windsor Lawn Tennis Club also offers its members an online system that they can use to book courts and also to search for a perfect playing partner with similar skill levels.

And, if any player is unlucky enough to break a racket string, Roger Henry is there to offer an in-house stringing service.

Presentation of the courts and club facilities ranks very high with the operations committee and that responsibility lies with groundsman Ray Downs who has been working at the club for the past four years.

With a long career in maintenance with the Northern Ireland Civil Service behind him, Ray works three days a week ensuring everything is as it should be.

Ray says his late dad Eric was his inspiration, leading him into a lengthy career in the civil service and for being able to carry out maintenance.

He spends around fifteen hours a week working at Windsor and enjoys every moment of it. When there are special tournaments on, Ray is there every day, including weekends when requested, to ensure the good reputation the club enjoys is maintained.

Ray said: "I am well trained in the industry and wouldn't ask anyone to go on a training course I haven't done myself." 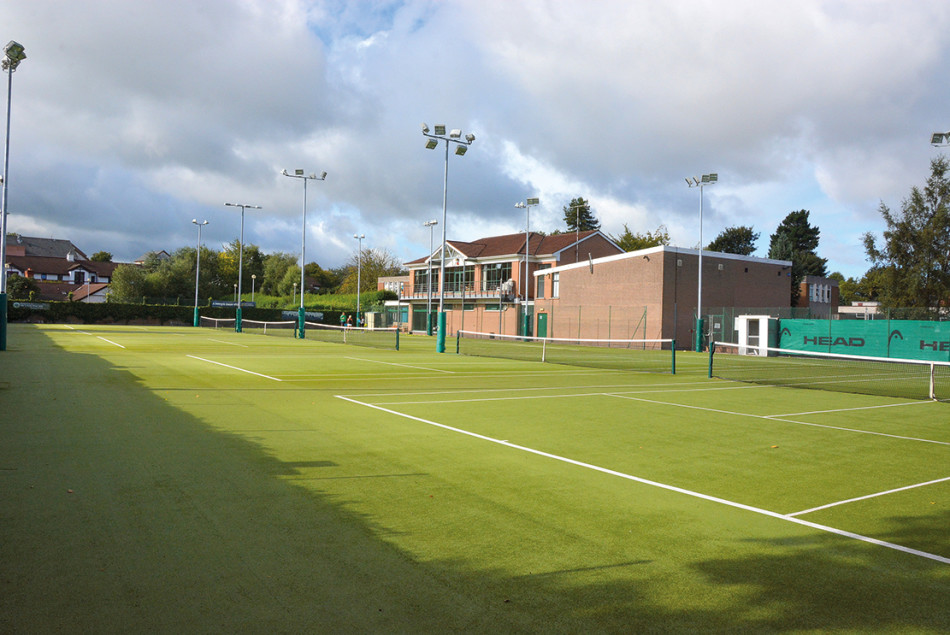 "I am certified for manual handling, working at heights, forklift driving, welding and metal fabrication, basic plumbing and heating, hazardous materials safe removal, safe working practices, operating an excavator up to 10 tonnes in size, tractor and trailer driving, high voltage switching up to 11,000 volts, electrician to 17th edition and I am a first aid first responder."

"These skills came in handy whilst working as a maintenance manager for the Northern Ireland Civil Service and subsequently here in the Windsor Lawn Tennis Club."

"I report to a committee of ten people and liaise with them if I need anything for my work or if purchases are needed to be made," he said.
Ray works alone, but does get help to erect the Super Dome and to change bulbs in the court floodlights.

"We bring in outside contractors to help put up the dome when it comes to October time. It's a big dome and takes up to five hours to erect. It came from a company in Belgium and some of their representatives also come over to help put it up."

"The dome is a good advantage to our club as it means we have two courts that can be used all winter long."

"If any of the bulbs in the floodlights blow, then there is a winch tool we use to lower the entire light in order to change the bulb. It's quite a task as those floodlights are very heavy, but I always get one of the club members to help me in that case," he said.

As mentioned, the club has five playing courts and its Ray's job to keep these clean for the members. The five astroturf courts were installed in 2013 and should, with good maintenance, last for ten years.

"Keeping them clean is quite a challenge," said Ray, "particularly so when the autumn comes as we are surrounded by trees that like to shed their leaves onto our courts." 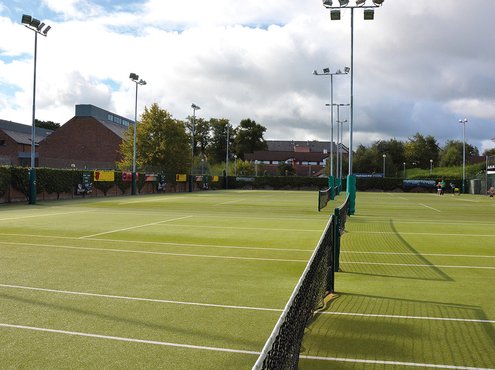 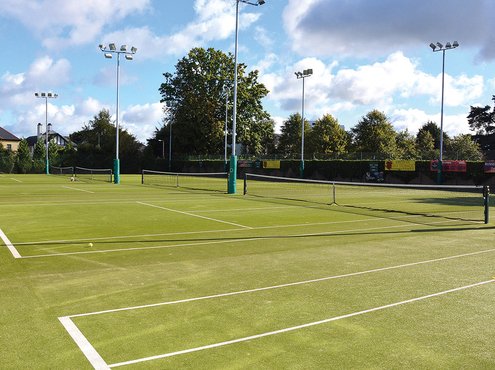 "In fact, leaves are quite an issue all year long. I spend a good hour each morning brushing up leaves or blowing them off the courts."

"I have a modified ride on Bolens lawn tractor that I use to brush the leaves and it is indeed very useful," he added. "It saves me a lot of time that I can dedicate to other chores during the day."

Sand is brushed into the astroturf periodically to ensure the players have adequate grip as the playing surface can become slippery when wet or damp.

"Normally, I would use around ten bags of sand, weighing 25 kilos, every two months," said Ray. "It prevents the astroturf from getting too slippery for the players."

"When I use the tractor and brush to clean up the leaves, the brush also brings up some of the sand which also helps to ensure there is a decent grip on the surface."

As well as catering for its 600 members, who use the tennis courts, gym and squash courts, it also hires out the function room to outside groups and holds various tennis tournaments throught the summer.

One such event that has become quite popular is blind tennis where a group of people with partial or no eyesight enjoy a few games under instruction by the club coaches.

In terms of equipment, Ray uses the small tractor but also has a leaf blower, a small fertiliser spreader to spread the sand, with some drainage channels and the large dome at his disposal, along with lighting rigs.

On top of the issue with leaves on the court, Ray has an added problem to contend with.

He said: "The club extends to around one acre here just off the popular Malone Road in south Belfast and is surrounded by various types of leafy trees. 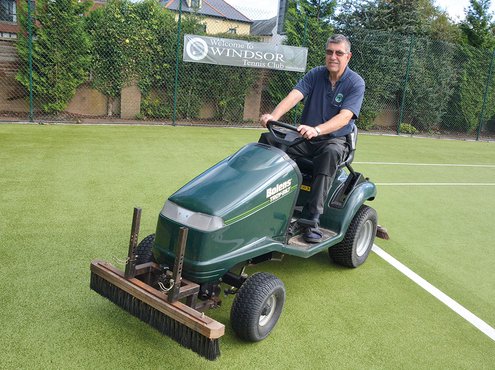 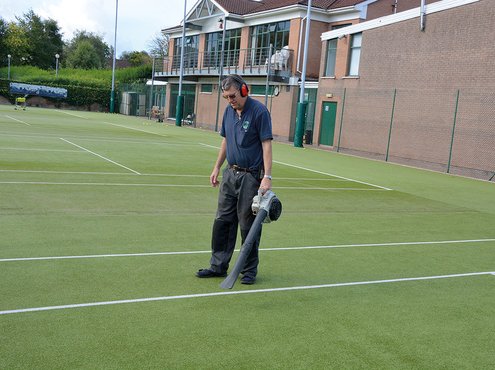 "It's not just the leaves that take a lot of cleaning up; there is also an issue with bird droppings. Mostly crows, but also other bird species, like to party in the trees at night-time and their droppings fall onto the courts."

"It's a real nuisance and takes a lot of time to clean up, but it's one of the hazards of the job," said Ray.

"Every time I am on duty my first task is to walk the total grounds and remove any rubbish and check all the tennis courts for damage, including the nets. On a weekly basis I remove any sign of weeds and, on a monthly basis, I spray all relevant areas for weeds using Roundup."

"Moss is also an issue here and I spray any concrete areas that would have signs of moss with Patiomagic. On direction from the tennis director, I cut any hedges and bushes as and when required."

"The artificial playing surface has a life span of ten years, so my main job is to make sure it lasts at least ten years through maintenance and moss prevention."

"I am the only groundsman at the club so I make my own schedule," he added.

Ray travels some eighteen miles from his home in Ballynahinch to the club and takes great pride in his part time role.

"A good presentation of the club and courts comes number one in my book as I believe a person will make their opinions about the club within the first thirty seconds of arriving here." 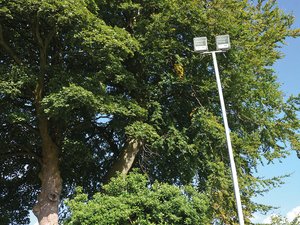 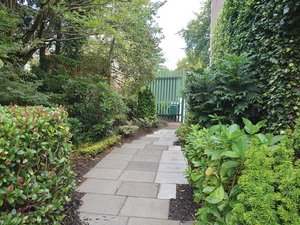 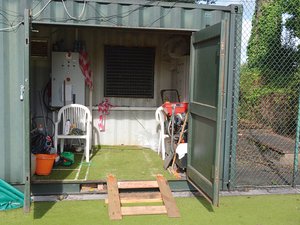 Making best use of his various qualifications, Ray has, in the past, installed an air conditioning system for the gym and replaced all the electrical switch gear required for the entertainments licence.

"I've just finished installing a disabled toilet and will be starting work for a lift installation soon," he said.

If any equipment is required to aid with the ongoing running and maintenance of the club and courts, Ray contacts the committee. Normally, any major equipment purchases are made from local dealers. There is no real loyalty to one brand or dealer, according to Ray, and items are purchased according to best value for money.

"The tractor was purchased outright and has helped greatly. Buying dehumidifiers outright for our indoor courts in the winter has made a significant difference with water on the courts too."

"It's a great place to work. We have around six part time staff who help look after the club, as well as the tennis director who is full time."

"Our membership is quite healthy and continues to grow. Sadly, the club facilities cannot really expand as we are hemmed in by a school and a church on the other side. Nevertheless, it's my goal to keep what we do have in tip top condition," he concluded.