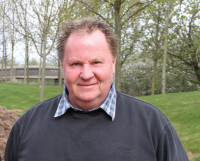 With Premier and Football League groundsmen expected to provide a surface for much more than ninety minutes of football each week, Carl Pass, Managing Director of Premier Pitches Ltd., reckons the best way to achieve this is to provide a new pitch each year

Professional football pitch management is no longer about providing a surface which will withstand the rigours of ninety minutes of football, as any League groundsman will testify.

Groundsmen now have the additional pressure of providing a surface that will be used for a pre-match warm-up which can last up to thirty minutes. There are also half time activities, including penalty shootouts, marching bands, dancers and junior matches played across the pitch. In addition, many teams now insist on a warm-down after the match which, in some cases, becomes a full-blown training session for squad players not involved in the ninety minutes of action which has just taken place out on the pitch.

Success in European competitions brings additional burdens as travelling teams have access to the match pitch for training sessions on the day prior to the tie being played. Other events, such as music concerts, bring in much needed revenue to clubs who are in the business of making money by what ever means to support their main objective, which is to be successful on the pitch.

All these activities are undertaken often in grounds which have either evolved into multi-use venues or, worse still, have been designed with little or no thought to the well being of the pitch. The consequence of such relentless use is a degenerated surface which may suffer from compaction, poor drainage, little or no grass cover and uneven levels. 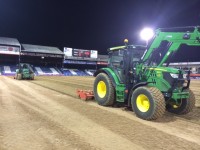 So, where does this leave the person entrusted with producing a surface which will cater for all the needs of a professional football club?
Clubs will not reduce the height of stands to reduce the impact of shade, nor will they open up corners of the stadium to allow increased air movement, or reduce the amount of additional activity on the pitch during match days and in the close season. It is my view that we must take a positive stance to the situation by adopting a new philosophy of preparing new pitches rather than repairing old ones.

Come the end of the season, clubs who wish to maintain a high standard of playing surface, whilst maximising revenue from other opportunities, must accept that the pitch has done its job and replace it. This is particularly important in a stadium environment where the groundsman is, essentially, growing grass indoors.

Beginning the season with a new pitch offers the greatest opportunity for the surface to withstand the difficult environment it is expected to perform within. Stadium pitches, in general, have improved tremendously over the past ten years, which is a credit to all involved, including groundsmen, researchers and manufacturers of specialist turf maintenance equipment. I'm fortunate to work alongside progressive agronomists and the new generation of sports turf managers and head groundsmen, who realise the advantages of preparing a new pitch, rather than repairing an old one.

So, what are the advantages of pitch preparation rather than repair? When should it start and how is it achieved?

A consultant or the groundsman should either prepare a specification or discuss with a reputable contractor the work that is required and when it can commence. 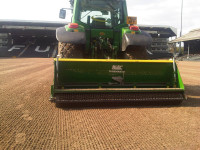 The specification will include a bill of quantities, which will outline to the contractor what he is expected to supply and what the club may wish to supply themselves.

As a contractor, I feel it is important that the groundsmen choose materials that they want to work with as, when we've finished and left the site, it is they who are responsible for seeing the pitch through to the end of the season.

Materials should be ordered and provision made to store them safely away from the elements as required. Bulk materials, such as Fibresand or Fibrelastic, need to be ordered in advance and a delivery time and date agreed.

As soon as the club's corporate department has finished with the pitch and all coverings are removed, the contractor should be on site ready to commence work.

The existing pitch surface should be stripped using a Koro TopMaker, a superb piece of equipment that has revolutionised the way pitches are renovated. The Koro strips the entire surface, removing all organic accumulations and leaving a clean, debris-free rootzone which can then be worked with to produce the desired playing surface. 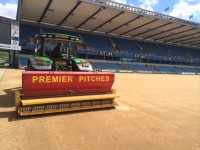 Initial cultivation can then commence to break up any pans or layering which may be present within the top 100mm of the pitch profile. This work also serves as the ultimate form of aeration as it redistributes particles around the profile and allows any anaerobic conditions to become oxygenated. Should any soil conditioners, such as seaweed or granulated lime stone and fertilisers, be required, they should be applied at this stage to ensure they are thoroughly incorporated in to the vital top 100mm of rootzone.

Once initial cultivations are complete, and dependent upon the specification, it would be normal practice to apply new rootzone material, which is often Fibresand or Fibrelastic. This is intended to replenish any material lost during the removal of the surface. It is important to use a specially adapted drop spreader, such as the Raycam Speedresser, which is capable of handling this type of material without bridging or blocking as work progresses. 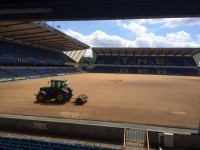 The evenly spread material can then be integrated into the top 100mm by further cultivation, normally with a rotary harrow. At this stage, a visual inspection will dictate how many passes with the cultivator are required to produce an evenly blended rootzone. The final pass will be made and levels trimmed to be consistent with those of the original construction.

Consolidation will be required next. This is a vital aspect of the works and should be carried out evenly and accurately all over the pitch to achieve consistent results. As work progresses, it may be necessary to irrigate at this stage to maintain a degree of moisture in the immediate surface, preventing the separation of fibres. Fines in the rootzone can also find there way onto the surface as a dusty residue if irrigation is not available, causing problems later in the season by impeding surface drainage. 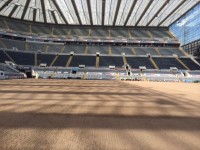 Fine finishing is a vital aspect of achieving the end result. This work should be undertaken by skilled operators using specialist machinery and equipment. When surface levels are seen to be satisfactory, the next stage of the works can then commence.

The pitch should be overseeded with a seeder designed specifically for sowing a pitch from scratch. Usually two passes will be made with this type of machine, but more may be required if the groundsman or consultant dictate otherwise. Finally, the pitch should be flat rolled to seal in the seed and produce the finished level.

He can carry out this work in the knowledge that he has a completely refreshed rootzone, free from any layering and its associated problems. 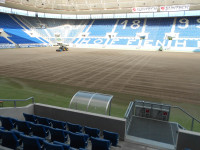 Drainage rates will be increased considerably, preventing waterlogging during the wetter winter months. The sward will be made up of new grass plants all establishing seminal roots which will form the basis of a strong root mass, essential for durability. The weedgrass Poa annua will be largely eradicated to the point when it is no longer a problem and the whole pitch will be in better condition than it would have been if it was a pitch renovated from the previous season.

The work I've described is more expensive than standard renovation, but not so high that it should not be within the budget of any professional football club. Those with very limited budgets could achieve an acceptable result by fraize mowing to clean out the vegetation and overfeeding, enabling them to begin each season with a new sward.

To get the very best from the playing surface, new pitch preparation should be carried out each year. In reality, budgetary constraints and other issues, such as restricted timescale, may prevent it. From my experience of working across the UK and in Europe, it should be a major consideration for any club who want to maximise both pitch performance and profitability.