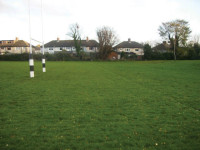 Whether you believe in climate change or not doesn't alter the fact that we have all been experiencing some unusual weather patterns over the last few years. It has been particularly difficult for the groundsman to implement traditional seasonal maintenance programmes, when the rule book seems to have gone out of the window.

Ireland is generally wetter than most areas of the UK, and drainage issues are dealt with as part of the ongoing maintenance programme. But, the last few years have seen a set of weather features which could have caught some groundsmen on the hop.

I have been considering ways to avoid some of the worst conditions that effect not just groundsmen in Ireland but across the UK.

Two major factors which have previously been rare are now much more common place; early snowfalls and ice, along with flash flooding. We should now be expecting these phenomena to occur, and I would recommend adopting an open minded approach to finding measures to alleviate, or at least minimise, the potential damage they can cause to natural turf sports surfaces.

The issue of ice on fine turf causing winter kill can be devastating to the playing surface, leading to large areas out of play, sub-standard playing surfaces, extra maintenance and labour costs.

Snow and ice on grass has similar effects wherever you find it and, therefore, I see no reason why the remedies can't transpose to other countries. So, it may seem extreme but I have been looking to our experienced Scandinavian friends, who have recently been trying a unique approach to their age old problem.

One Swedish greenkeeper, working in Norway at present, tells us that he has always used a vertidrain to break the ice after the snow has been cleared, with varying degrees of success. He understood the need to release the gases building up below the ice, but considered he would protect the playing surface more effectively if he could reduce the ice melt between the green and ice layer.

The greenkeeper in question successfully used a linear disc aerator (in this instance he used the Imants Rotoknife) to penetrate to 150mm or 10mm @ 50mm centres and break through the ice cover quickly, causing it to disperse through the soil with minimal damage to the turf. He now recommends using this type of machine to anyone faced with unexpected early ice and snow.

Sometimes, we can use existing techniques and equipment but, in different circumstances which may not seem obvious at first, but actually are very effective.
Flash floods is the second problem which has been particularly prevalent in Ireland over the last few years, but can affect anywhere in the UK.

Again, if we understand how the floods behave and the effect they have on a pitch with a traditional main drainage grid scheme in place, we can then look at other ways to encourage more efficient drainage.

One solution that has potential is by adding additional slitting lines at 45 degree angles to the main lateral drains using a decompactor.

Working in isolation, or in conjunction with existing pipe drainage schemes, a decompactor is the perfect method of enabling water to drain quickly and unimpeded to the existing sub-surface systems. A continuous slitting action allows the operator to slit back to drains, ditches or other water collection systems. Machines such as the Imants Shockwave, or indeed a mole plough that many course managers in Ireland still use to alleviate water collected in bunkers, are an effective choice.

David Geraghty is the groundsman at Belvedere College, one of Ireland's finest boys schools, based in the centre of Dublin, and is responsible for maintaining seven pitches. His is a perfect example of how a different approach has radically improved the way they cope with excessive, flash flooding.

The ground at Belvedere has always suffered from compaction and a lack of effective drainage, which had become much more of an issue with the extremes in weather experienced over the previous few years. They addressed the drainage problem, initially, by installing improved main drains. Then they found instant localised improvement by using a decompactor to relieve soil compaction, and allow the natural dissipation of surface water, revitalising heavy wear areas. It also helped to improve general aeration and ongoing removal of surface water, throughout the wet season.