0 Wiping bracken from the face of the United Kingdom

As an invasive and injurious (noxious) weed, bracken continues to cover an increasing area of the United Kingdom (UK) landscape. Direct dangers and consequences of bracken infestation are loss of grazing, potential toxic hazard to livestock and people and loss of biodiversity in the wider environment.

The requirements for successful and sustainable bracken management are a fast and versatile herbicide application system that minimises environmental contamination (particularly any chance of run-off and/or pollution of water supplies).

The Micron WeedSwiper is an established non-drip, weed-swiping applicator which can be mounted on a tractor or towed behind by, for example, a quad bike (ATV), pick-up truck, etc. As such it can be safely and effectively used to apply a total non-selective herbicide, e.g. Roundup ProBiactive (glyphosate), with minimal use of herbicide (only that wiped directly onto the bracken) and without risk of run-off onto non-target plant species, including pasture grasses.

Three machines were purchased by Natural England in 2007 to control bracken in the Black Mountains on the Welsh/Herefordshire border. Trailers were also purchased to enable use behind ATV's. They were used by hill farmers via three separate machinery rings (networks). Each ring comprises a group of neighbouring farmers controlled by a 'co-coordinator/user-farmer' who is responsible for overseeing machine use within each group.

All machinery rings applied Roundup ProBiactive at a 33% dilution rate (1 part product to 2 parts water) in August 2007 on areas which had mostly been cut beforehand, although there were a couple of instances of uncut bracken being treated.

Observations made across each group's area one year later (July 2008) indicated consistently good bracken control and general agreement on relative effectiveness of different cutting/treatment combinations. Emerged bracken fronds were significantly thinner than at the same time in 2007 (prior to treatment) indicating a significant reduction in re-growth. There was some growth of young fronds but these were already showing severe herbicide damage due to product translocation along the rhizomes. Even bracken growing at the edges where it was impossible to cut or wipe had been severely weakened. Plants were blackened at the base and quite easily pulled out of the ground. 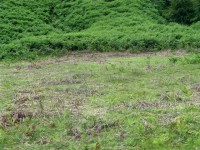 Control of bracken in those areas not cut prior to wiping actually appeared to prove better control than in areas that had been cut and then treated with the WeedSwiper. At first sight this may appear to offer a distinct economic advantage but, as the farmers point out, cutting is generally carried out so they can see where they are going when treating the land.

The farmers involved are very pleased with these early results and encouraged by the success of this economical and sustainable application system combination of Roundup ProBiactive applied by the Micron non-drip WeedSwiper.