0 Wish upon a star... make sure it is not STARWEED!

When you wish upon a star...just make sure it is not STARWEED!

Having seen the recent comments on the Message Board regarding a turfgrass weed called starweed, which is prevalent on fine turf situations and in particularly bowling greens, I took up the opportunity to follow the web link mentioned on site. This took me to Golf and Sports Turf Australia, an on line magazine that published an article on this weed by Ron MacCartney. Below is the full published article kindly provided by Golf and Sports Turf Australia.

The Beginnings:
A small plant found on a bentgrass bowling green in Melbourne during the spring of 2001. Not having seen the plant before, the Greenkeeper asked us for an identification and control recommendation.
The services of John Reid, an obliging Botanist at the National Herbarium of Victoria, were enlisted to provide a positive identification. His response: This was the first ever sighting of this plant in Australia. What is it? It is a member of the large plantain family, which has over 260 species. Its botanical name is Plantago triandra, but in New Zealand it is known as 'Starweed' due to its star-shaped rosette growth habit.

A New Weed:
Starweed has quite a distinctive appearance.
Any such occurrence of a new plant is immediately referred to a group within the Department of Natural Resources and Environment (DNRE), called Rapid Response for New and Emerging Weeds. This group undertakes an assessment of the new weed in terms of its impact on social, environmental and agricultural impact. Starweed has been given a relatively low priority because it has been assessed as having no social implications. That is, it will only affect recreational areas. Other weeds, of higher priority were given precedence. I believe that that decision has been unfortunate because Starweed has now been found in a green at a second Melbourne bowling club.

As you can see from the photo, has a quite distinctive star-shaped appearance. Each plant can grow to 30 mm diameter, but its tendency to form clusters means that the turf grass is easily smothered out. In New Zealand, Starweed has been a significant problem in the Cotula greens, where it has become widespread. Many infested greens have become so dominant in Starweed that the greenkeepers have found it easier to maintain as a playing surface rather than continuing with ineffective control measures.

Each starweed plant can grow to 30mm in diameter, but it's tendency to form clusters means that turf grass is easily smothered out.
Starweed produces very small seeds on many tiny stalks, so they are easily carried away on shoes, bowls and cleaning cloths; and even in pockets. With bowlers having a penchant for wanting to bring a good green home, I would not be surprised if a small piece of plant was secreted in a pocket or bowls bag, 'to improve the green at home'. Irrespective of its transit details, Starweed is here now and we need to deal with it. 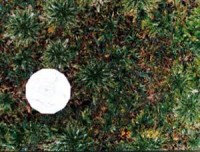 Control Measures:
Starweed will grow from cuttings and seed. Physically removing plants is rarely successful because the plant will regenerate from any remnants of tissue left in the soil. Treatment using a broadleaf herbicide is the most effective method of control, but here again the plant has its own armour. The plants have a thick, waxy leaf surface (cuticle) which limits the penetration of chemicals. Some Greenkeepers apply a wetting agent first to strip off the waxy cuticle. This allows better penetration of the herbicide and can result in an improved kill. Unfortunately this can cause some of our general purpose broadleaf herbicides to have a more phytotoxic effect on the turfgrass. In New Zealand, the plants often do not develop seed until their second year, so it is thought that early detection and eradication is a good way to reduce the spread of Starweed. However further research is needed in Australia because seed stalks have been found on our first import.


Everyone must help:
If this threat is to be contained it is essential everyone who uses greens is involved. Greenkeepers need to adopt good cultural practices to limit the spread of any plant material.

The DNRE supports any measures to eradicate Starweed, including cultural practices such as washing equipment and footwear. They use a Niproquat solution (20 mL in 10 L water) for washing down boots etc. This is a sanitiser that is able to desiccate any seeds it contacts, thus providing a simple method of limiting the spread of undesirable weeds. If you think that you may have Starweed in one of your greens, don't hesitate to seek advice. Contact Sportsturf Consultants (Ph 03 9574 9066) for a positive identification.