0 With a little help from their friends 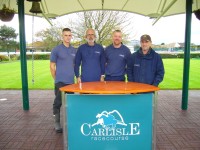 A small, busy racecourse with an illustrious history, Carlisle provides high quality racing for flat and national hunt fans for eleven months of the year. The dedication and commitment to improving the racing surface shown by its small grounds team has been rewarded with the Best Dual Purpose Track title in the RCA Racecourse Groundstaff Awards 2014, in association with Pitchcare, ALS and Watt Fences.

For head groundsman Thomas Wootten, his career path has been a natural progression - he succeeded his father two years ago and has worked at the track for fifteen years.

"Racecourse Manager Geraldine McKay had encouraged me to go on all of the training courses and to prepare for the role," he explains.

The family connection remains - although father Tony is now retired, he is retained as one of a number of regular casuals, his speciality being verti-draining and, in recognition of his long years of service at Carlisle, the new hurdle track was named after him when it was opened in 2011.
There are three full time staff including Thomas, soon to swell to four with a new recruit joining the ranks. A team of ten regular casuals, all locals, are essential for repairing divots after racing, ready for the next meeting. 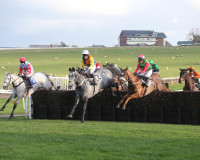 With jumps racing from February to May, when the flat takes over until September and then the return of the jumps season in the autumn, it is a hectic programme. There are twenty-six meetings scheduled for 2015, a significant increase on the eighteen held in Tony Wootten's day.

There are some high class races too: over the jumps, the Cumberland Chase meeting has £20,000 prize funds for three races, whilst the Cumberland Plate flat fixture in June boasts a total prize fund of nearly £100,000 and attracts trainers and jockeys from all over the country, plus 5,000 racegoers.

Crowds also flock to the summer Saturday music nights which can attract 10,000 people to see the likes of Madness and Wet Wet Wet after racing. Thankfully, the stage is now situated on hard standing - its original location on the chase course once caused the abandonment of a meeting due to waterlogging - and Carlisle can call on local farmers for overflow parking.

Then there's the climate to consider - the only abandonment of 2014 came after six inches of rain fell in February. 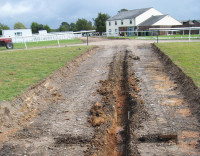 Thomas adds; "October brought 4.5 inches of rain, but our ongoing programme of drainage and sand slitting improvements meant that the ground took it."

"There are two clerks of the course who share Carlisle between them, Andrew Tulloch, who is based at Aintree Racecourse, and Kirkland Tellwright, who is based at Haydock Park Racecourse. Andrew reckons we are always two or three degrees colder than Aintree, even in the summer."

"As a small course, we can't justify covering the whole track, but we do protect take-offs and landings, crossings and shaded areas."

To provide good ground for the flat season, a Briggs irrigation system is deployed, with a 16m Briggs boom and two hosereels. Twin rain guns are used on less accessible parts of the course, including a new twin gun for the early part of the jumps season to negotiate the bypassing areas around the chase fences which can't be reached with a boom. 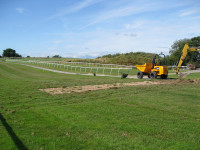 Thomas has a strategy to tackle the inevitably time consuming nature of irrigation; "We have five people who are trained to use the irrigator so it can be done in shifts. No-one ever has to do the whole twelve hours it takes to water the track, which can start at 6.00am."

The last four years has seen a continual programme of improvements at Carlisle, starting with the fences themselves, he explains.

"We noticed that the birch was being easily knocked out of the frames when horses hit the fences during chase races, so we have deepened the frames by four inches so that we were able to increase the number of birch bundles to take the impact better. The toe boards also have been made taller to provide an improved, more visible ground line for both horses and riders and so that they can be dug further into the ground to avoid horses' hooves getting stuck under them in soft going."

Thomas has also surveyed all nine of the fences on the jumps track to ensure that they meet the British Horseracing Authority standard of being 6ft to 6ft 6in from the toe board to the back of the birch. Where necessary, they have been altered to all measure 6ft 2in, a consistency that should encourage better jumping. 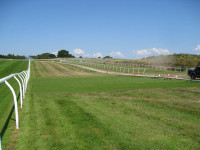 Work on the fences has to be fitted in around the normal routine of mowing, alignment/moving of running rail, watering, fertiliser application etc., so they have been improved two or three at a time during any quiet periods.

With little spare capacity, groundstaff from Aintree, a sister Jockey Club Racecourse, are drafted in to help with any major projects.

This year, that has included the moving of a chase fence that had seen an unusual number of fallers, as Thomas explains: "Aintree Head Groundsman, Mark Aynsley, and his team dug out, drained and returfed the site of the fence, then we relocated it fifty yards further up the hill.

The new fence has been jumped at the first two national hunt meetings this year with no fallers and we have had good feedback from the jockeys." 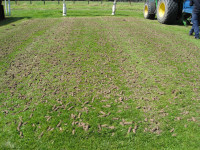 "We also hollow cored the landing areas of all our jumps. Mark and his team then raked up all the cores then swept rubber crumb into all the core holes, which has really helped to decompact these areas."

The team also put in new road crossings, adding an additional crossing point on the back straight and renovating the others, installing new drains, adding stone and laying fibresand so that the courses remain dry after heavy rain. "We were so busy with the flat season at that time, the extra help was very important," says Thomas.

During the winter months, Carlisle traditionally had a reputation for heavy and sometimes bottomless going, but an ongoing programme of drainage and sand-slitting - at a cost of £20,000-£30,000 a year - using contractors Souters - has made a significant difference.

"Each year, we identify areas needing attention the following spring," Thomas explains. "As you improve one area, it makes another one look worse!" 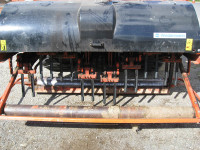 New furlong poles are also a precaution against the elements - held in place by one bolt, they can be easily removed when high winds are forecast to prevent damage.

Thomas and his team have also created two girthing up areas, from land inside the new hurdle track, for final pre-race adjustments to the horses' tack to save wear on the track itself. One area was also drained this year by Souters.

Major renovation work is usually carried out in the four week gap between the end of the national hunt and the start of the new flat season, although it also takes place in other quiet periods.

The racecourse has had its own Wiedenmann Terra Spike for eight years which, Thomas points out, gives the flexibility to decompact areas of the track as and when required. "We tend to use it post-season for each track, plus the whole course in spring if the conditions are right. It's also useful to alleviate compaction on jump landings if they get a bit firm, and to allow horses to get their toe in on the flat course bends should there be showers during or just prior to racing after a dry spell. In addition we have a Sisis slitter that comes in useful." 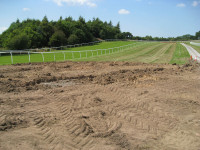 Overseeding of the national hunt track in the spring freshens up the sward, but Thomas admits that dry conditions caught them out this year when busy with the flat course and it needed another application. The bend and home straight on the flat course get some seed at the end of their season.

The new hurdle track is still becoming established, and it came in for criticism initially, but as Thomas says; "It is fresher ground, but improves every year."

A rapid germination seed is needed in spring and summer, whilst BAR 50 SOS grows well in the cold winter conditions.

A new fertiliser programme has been introduced in consultation with Andrew Tulloch and Mark Aynsley.

After starting the season with a Quickstart six to eight week release application over all three courses, slow release products are used throughout the summer as needed, before Headland Xtend 15:2:20 is applied in September to harden as well as feed the sward. Liquid Grow Green is also used in September to green up the national hunt courses before the start of the season. 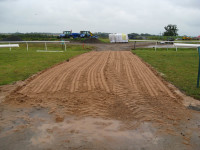 A pair of Trimax Stealth front mounted rotary mowers are used to keep the flat course at 85mm and the jumps tracks at 105mm cut heights.

"We cut the flat course twice a week and the national hunt course once a week in summer but, when we are watering a lot, there is strong growth, even though we are using slow release fertilisers," Thomas comments. "I live on site and, if there is a bit too much growth, I might pop out and give it a third cut at the weekend when the other staff are off. It's one of the perils of having a house on the course!"

He adds that he prefers tractor-mounted mowers to self-propelled machines as he feels they make less impact on the course in wet winter conditions. "We might be looking for a new mower in the next couple of years and, unless there is anything else that comes onto the market, I would certainly use Trimax again."

The Stealths are also used to cut adjacent fields in preparation for the Cumberland Show which is held on the racecourse each summer, but Thomas admits that a rougher cut mower might be better for this task, so that is also under consideration.

As part of Jockey Club Racecourses, Carlisle has access to tractors and machinery from John Deere, including a new ride-on purchased this year to cut lawns and public areas. A John Deere 5085R is also soon to join the fleet and, with a creeper transmission suited to the Terraspike, will take pressure off the existing tractors and add flexibility.

"The oldest tractor in the fleet is a 57 plate, and we use local dealer Johnsons to do all the servicing as none of us are mechanics," Thomas comments. "One tractor is covered by John Deere's Powerguard service plan, so some costs are included, and the 5085R will be supplied on a lease basis with an agreement that covers all of the servicing."

With an impressive array of improvements in recent years - yet another upgrade was to the pre-parade ring which has been resurfaced with rubberised tarmac - Thomas and his team can look forward to maintaining the developing track to the highest standards over the coming seasons.