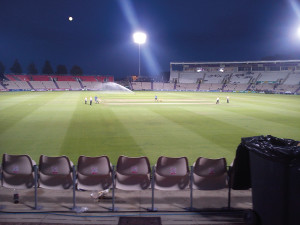 Our anonymous groundsman, Mr AKA Grasscutter, fills his boots with sport on terrestrial television - and then gets grumpy!

My Club isn't situated in what you would call the 'heartland' of football, so fans have to travel some distance to see a Premiership game. A good number do, but we still get our fair share of local support which keeps the club ticking over. We are not quite at the 'one man and his dog' stage yet!

Neither do the club feature live on TV very often - just a handful of times in the last five years - although we do make an appearance on the Beeb's Football League highlights show briefly every week. I can sometime be found hitting the pause button just so I can get a feel for how the pitch 'looks' on TV. Mrs Grasscutter doesn't understand!

I don't subscribe to Sky Sports, so my viewing is generally limited to terrestrial television when it comes to sport so, when the World Cup rolls round every four years, I tend to fill my boots, so to speak, whilst Mrs G's soaps are consigned to somewhat unusual viewing times. The club do have Sky in the bar, so I can watch a live game if the mood takes me.

The Suarez 'fall onto an opponent's shoulder' aside, I thought it was a thoroughly enjoyable World Cup. In the run up to the competition, I feared for our industry; there were so many reports in the press and on TV about how bad some of the pitches were going to be, yet the upshot was that the majority looked and played very well, at least through my eyes. I understand there was a good deal of British input into the pitches, so well done to all involved.

Where sport is concerned, mine and Mrs G's shared viewing experience is Wimbledon. Most weekends we can be found playing a mixed doubles on a local court, followed by a pint and the weekly shop, so tennis on the TV usually finds us 'grunting' along with every shot played!

Again, the surfaces looked to play well, so I was surprised to see the press regurgitate the story of 'slippery courts' from last year. What purpose did that serve, I wonder?

Meanwhile, the groundsman at Trent Bridge was being roundly lambasted by the media for producing a 'dead' pitch for the 1st Test against India. So much so that the club offered an apology on his behalf.

I enjoy my cricket, but I know very little of the science involved in preparing a cricket pitch, but am aware that there is an ECB requirement to produce Test pitches that last five days to 'maximise revenue'. I can't help thinking that this may well have had something to do with the Trent Bridge wicket. As I say, I don't know, but I'd be pretty disappointed if my club offered an apology on my behalf because our team had lost at home!

I went to a NatWest T20 Blast game the other week and spent more time watching the groundstaff dragging covers on and off, rather than the cricket, as showers rolled through at regular intervals. The game eventually finished just short of 10.00pm and, as I left the ground, they were once again out on the square tidying up after the game, no doubt getting home around midnight. I felt for them.

Similarly, I know that the vast numbers of greenstaff working on the Open at Royal Liverpool will have started at around 4.00am to get everything prepared for the day's play, with a late finish guaranteed once the last putt had been sunk on the 18th for the day.

I know that I can read about the trials and tribulations of groundsmanship and greenkeeping in this magazine, but I do get frustrated as to why more isn't made of our considerable commitment to our respective grass surfaces in the national media.

Keep the faith; and keep cutting the grass, after all, that's all you do!

Pitchcare magazine is sent to leading sports journalists and commentators in the UK.