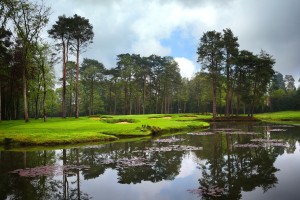 Woking Golf Club in Surrey, England, has opened its new par three sixteenth hole. The new hole, which was designed by architect Tim Lobb, London-based principal of Thomson Perrett & Lobb, the firm founded by five-times Open champion Peter Thomson, represents the most significant change to the historic course in over 50 years.

"Woking is a club that looks to evolve steadily," said captain Simon Chantrey. "When you are over 120 years old, members tend not to like sudden major change! But our existing sixteenth hole, fine though it was, had two key problems. Firstly, the lower level of the two-tier green turned into a pudding in most winters, and despite many attempts, we were unable to fix it to our satisfaction. And secondly, because of the proximity of the green to the nearby Hook Heath Road, balls would sometimes fly off the golf course, across the road and into a neighbour's garden. Given that the green itself was not wholly original - it was extended in the 1960s - we concluded we needed to change the hole."

Work began on the new hole in the autumn of 2012. Tim Lobb said: "When you are asked to work at a club of Woking's stature, it is both inspiring and intimidating. For golf course architects, Woking is a holy place and a key location in the history of our profession. The course is famous for its undulating greens, created over many years by club members Stuart Paton and John Low, and we knew that any new green had to have the 'Woking spirit' built into it."

The new hole plays to 147 yards, around ten yards shorter than the old sixteenth. The tee is set close to the boundary fence, and golfers must still hit over the pond, created in the early 20th century for use in winter as a curling rink. The green, forty yards to the left of the old one, is highly contoured, in keeping with the rest of Woking's putting surfaces. Three bunkers guard the putting surface, though there is room for golfers to run the ball up onto the green if they choose.

Working with club agronomist Bruce Jamieson and head greenkeeper Jon Day, Lobb created a bespoke rootzone mix for the new green, designed to match as closely as possible the soil found under the existing greens. Day grew turf for new hole on the club's nursery, again with the aim of ensuring matching conditions. "It was very important to us that the new hole fitted in to the existing course, and that Jon didn't need to use a completely different maintenance regime," said Lobb.

The club opened the new hole in April 2014, and it was first put into competitive play at the recent Spring meeting. "Reaction to the new sixteenth has been extremely positive," said captain Chantrey. "It feels as though it could have been part of the course for many years, which is a big compliment at a club like this!"