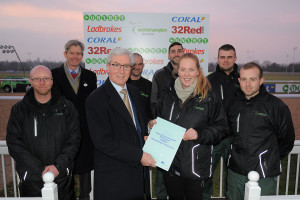 The Wolverhampton Racecourse Groundstaff team were out in force last Saturday to receive a prestigious Racecourse Association (RCA) Merit Award. In attendance to make the presentation was John Richards, Operations Director at sponsor, Pitchcare.

The award was given to the team from Wolverhampton Racecourse, led by Elizabeth (Libby) O'Flaherty, in recognition of their outstanding work during 2014 when the track was replaced and there was major refurbishment of the site as a whole.

The racecourse was closed for 3 months during the year whilst the existing all-weather surface was replaced by an innovative Tapeta surface, the only one of its kind in the UK. This was a sizeable investment and commitment to the racecourse by owners Arena Racing Company (ARC).

Tapeta is renowned internationally as a safe and durable surface for horses to both train and race on. It is used at four racecourses and dozens of training tracks across ten countries. The four racecourses are Sheikh Mohammed's Meydan racecourse in Dubai; Golden Gate Fields, San Francisco and Presque Isle Downs, Pennsylvania in the USA; and Tapeta Park in Devonport, Tasmania in Australia.

More information on the work at the racecourse can be found here: www.wolverhampton-racecourse.co.uk.

The RCA Awards are sponsored jointly by Pitchcare, Watt Fences and ALS.