As part of the construction of its new £7 million Academy and Arena, Championship club, Wolverhampton Wanderers has invested in a new indoor artificial pitch, produced and supplied by TigerTurf; the UK's leading manufacturer of synthetic sports surfaces. 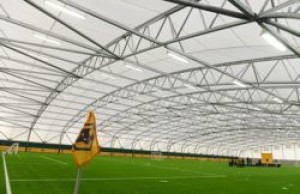 The new 3G surface, which has been installed to cater for both 11 a side and smaller-sided training matches and drills, enhances Wolves' 'Category One' academy status - the highest status that can be awarded by the Premier League's academy accreditation system.

Steve Morgan, Chairman at Wolverhampton Wanderers FC, said, "The Wolves Academy & Arena will give our highly qualified coaches, and our young players from eight years of age upwards, every possible chance of maximising their potential by becoming successful professional footballers, hopefully making it through to the Wolves first team.

"Parents of young players will know that their child will be training at one of the top-rated academies in the country, developed by the best coaches at a top-class facility, giving them the best possible provisions."

Paul Langford, Managing Director at TigerTurf added: "We're delighted to have been able to provide a new 3G pitch at another one of the country's most highly-regarded academies. Wolverhampton Wanderers have a proven track record of bringing through some extremely talented young footballers and we're sure the new indoor pitch will enhance what is already a world-class training facility."

For more information from The Sports and Play Construction Association click here.