IF the current membership mix of The British and International Golf Greenkeepers Association (BIGGA) is any gauge, few women are making the turf industry their preferred career.

The statistics appear damning - of 7000 members, only 50 are women. Gemma Lee of the Association's membership department says that this degree of imbalance does not look set to change at present: "The numbers of women have not been increasing," she confirms. "The ladies do tend to renew and keep their membership up but the number remains fairly constant."

But why the inequality and what can be done to swell the ranks of women in the industry?

Pitchcare talked to three turf professionals, based in the UK and abroad, about their roles in the industry and how more women can be encouraged to follow suit.

Karen Carter, Grounds Manager at Edgbaston Priory Club, has found success and a long career in an industry that she believes is very much dominated by men. "There are not enough women in the industry. There are a few ground workers about, but not many heads. It is looked at as a man's job. Having said that, there are other female employees at Edgbaston.

We employ quite a few students and the majority of these are women." Karen goes on: "I've been at the club for 16 years and I've been manager here since 1996. I fell into it by accident; Iwas actually in pharmaceuticals before, but I wanted a change. I started doing a bit of gardening first and then saw this job." "I thought, 'That sounds like the easy life' - it's not! They actually gave me an interview because they thought it would be sexist if they didn't. I got the job over some more experienced guys."

With no formal qualifications in the field, Karen explains that she the job because of her enthusiasm: "They thought, 'Oh we like her, we'll give her a chance'." Any industry sceptics pointing the finger at women as failing to match men in the physical demands of the job would soon be put straight by Karen. "I am just as hands on as the others. We have a large club with few staff."

The club was recently immersed in the spring preparations and had a lead-up tennis tournament to Wimbledon, starting on 10 June, to handle. There are perks to working at a private club, Karen explains. "We get to use all the facilities. It's also a very friendly environment, which adds to the level of job satisfaction."
"We work long, hard hours, but we're looked after and it's worth it." Her length of service at Edgbaston is surely testament alone to Karen's enjoyment of her role there.

But on a broader scale, she believes that the status of her job is rising. "It is becoming more recognised that being a groundsman is a profession and that we are professional people.

There are increasingly more courses and more opportunities for people to move into the industry for both men and women." Karen's advice for women seeking to pursue a career in groundskeeping is to gain both formal qualifications and practical experience. "Hands-on experience is sometimes better than books" she notes. As for opportunities for career progression, "The clubs have a budget for sending people on courses to get them better qualifications."

A Greenkeeper at the beginning of her career is Elizabeth Crowley. Like Karen Carter, she is an advocate of both education and experience for those wanting to make their mark. In her mid-20s, Elizabeth traces the originsof her career aspirations back to her childhood in Ireland. "I've been working on golf courses since I was 13 or 14.

A group of about 15 of us would go down to Old Head Golf Links, which was being created, and help by preparing fairways. I went back there year after year." Currently working on the historic New Course at St Andrews, laid out by legendary greenkeeper Old Tom Morris in 1895, her route to her present position at the Home of Golf has taken in formal qualifications and plentiful hands-on work as well as an industry 'first'.

"I was the first female to take a Certified Greenkeeper course in Ireland," she states proudly, "then went on the Turf Science and Golf Course Management course at Myerscough College in Preston." However, being a woman in a male dominated industry doesn't faze her; "I'm a bit of a tomboy, I grew up with two older brothers so it's nothing different to me really.

" Following this educational grounding, Elizabeth joined the Ohio State Turf Programme in the USA, which has taken her to a variety of worldclass courses including Augusta National, Pinehurst Resort and Merion.

"Back in October, I had the position of Second Assistant at Ledgerock Golf Club in Pennsylvania. I've come to St Andrews to gain more experience before returning to the States. 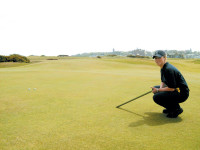 However, Elizabeth relates an all too familiar story when she says "I've come across one or two other women working in the industry but not very often".
The mix of tasks and a largely outdoor work schedule offers job appeal, she says. "Our days are very structured. We come in at 5.15am and all our jobs are up on a board, spread evenly among the squad.

We can get anything, any morning; mowing the green, raking the bunkers or setting up the course. Head greenkeeper Gordon McKie ensures there's lots of variety and I love working outside. The job is challenging and interesting - I never come in and do the same thing every day."

So what's her next rung on the career ladder? "I'm very motivatedand am always looking for opportunities. I'm looking to achieve superintendent status in five or ten years."

Does she have any guidance for other young people wanting to come into the industry? "Gain your education first, then try to enrole on the Ohio State Turf Programme."

In addition to its extensive internship programme, Ohio State University runs an entire department dedicated to horticulture and crop science. Working within this department is sports turf specialist Pam Sherratt and a further eight female colleagues - surely a state of affairs almost unheard of in UK groundskeeping and turf maintenance.

For Pam too, there's never a dull moment but in a different sphere of industry activity, as she explains; "The majority of my work is in 'Extension' - this is the English equivalent of consultancy but the client does not pay (land-grant universities such as Ohio offer this to state residents).

"I conduct about 30 in-state visits a year to sports stadiums and make recommendations. I also write for many scientific publications and magazines, manage a website and teach a BSc class each year in Sports Turf Management."

Pam's career is testament to the greater opportunities the US industryoffers beyond the more traditional roles at club level. She's not about tostop with what she's got either.

"I've just started my PhD so I hope to get a faculty position here at OSU or at another university in the States." Pam's level of dedication to her role as a sports turf specialist, she believes, stems from her deep enjoyment of the sector. "I get to go out into the industry a lot and meet people.

Every single day is different and I have the benefit of managing my own time. My travels around the US include taking in five or six national talks a year. So far I have been to 25 states but I still have plenty more I want to see."

Given such high levels of enthusiasm for, and commitment to, the turfgrass profession, why are more women not becoming involved in a sector that clearly presents them with a stimulating and rewarding environment?

Pam Sherratt, who also believes women are not sufficiently represented in the industry at present, can answer that question. "I think it stems right from school. Women are not encouraged or even made aware of the opportunities in turf management."

"There may be some women that are frightened off by the possibility of using heavy equipment or doing hard physical labour but the same could be said for many men!" But her final reason is perhaps most telling of all:

"We need to do a better job of educating careers advisors." Furthermore, Pam suggests that women should assume a higher profile in the industry. "We need good role models," she believes. "I know three women in my region of the USA alone that are head groundskeepers at large stadiums - Abby McNeal at the Chicago Fire MLS Stadium, Heather Nabozny at the Detroit Tigers MLB Stadium and Amy Fouty at Michigan State."

The enthusiasm for their jobs and careers that Karen Carter, Elizabeth Crawley and Pam Sherratt so clearly demonstrate should surely act as the inspirational force for other women considering a move into the industry. Perhaps in this sense, they themselves are the role models.