by External
in Football, Industry News, and Synthetics
on 22 Jun 2015

Players and coaches at the Women's World Cup have raised concerns about the artificial pitches being used at venues in Canada. 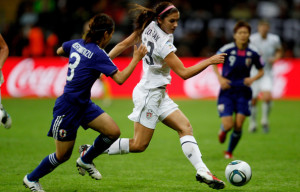 USA striker Abby Wambach was among the 84 players who fought against the use of the turf before the World Cup began. And speaking after her side's 0-0 draw with Sweden in Group D earlier this week, Wambach suggested the surface has hindered her in front of goal.


Germany keeper Nadine Angerer has also said the "dry" pitches are a concern."The pitches are getting hot and dry because of the sun," Angerer told BBC Sport. "They're watering the pitches but after five minutes it's gone. It's hard to reach the balls as you never know how they will bounce. Both teams have the same problem, but of course it affects the game."


The tournament, which runs until 5 July, is the first-ever senior World Cup to be held by Fifa on artificial turf.


In October, a group of players from 13 different countries launched legal proceedings against the Canadian Soccer Association (CSA) and football's world governing body over the use of the pitches, although the case was later dropped.