Woodhouse Grove was founded by the Methodist Conference in 1812 for the education of the sons of ministers. Rooted in traditions which have stood the test of time, the school is, nevertheless, flexible enough to meet the demands of an ever changing community.

The school opened as The Wesleyan Academy in 1812 with just nine boys, following the conversion of a twelve bedroom mansion with fifteen acres of land, all bought for just £4,575. Since those days, the grounds and buildings have grown considerably and are now set on a seventy acre campus. The original mansion saw the edition of wings in 1854 and, during the early 1900s, the site grew further with the building of a swimming pool, art and music block, along with science laboratories.

In the second half of the century, the addition of a war memorial building, plus the lease of fourteen acres of fields, completed the footprint of the school that we see today.

The last two decades have seen the building of a business management school, a new sports hall complex and a performing arts centre. In May of this year, a new 25m 'Jubilee' swimming pool was opened.

Woodhouse Grove is situated on the outskirts of Leeds in Apperley Bridge. It is a wonderful setting, with the sports fields providing an impressive frontage for the magnificent school buildings and 74 acres of land.

Simon Wood has been at the school for seven years and, previous to that, was a greenkeeper at West Bradford Golf Club for fourteen years.

He felt the need for a new challenge and, being a keen sportsman - he has played cricket

for Saltaire and Harden cricket clubs - he wanted to test his turfcare skills in a school environment. He worked under head groundsman, Bill Davies, for six years before being promoted this year following Bill's retirement.

As well as Simon, the school has three full time groundstaff; Steven Wilson, Andrew Hudson and Steven Bonde (who works at the prep school) and Alan Igglesdon who works part time.

Simon reports to the school's Operations Director, Robert Morton, and liaises with the PE department on a daily basis to ensure all fixtures and activities are catered for. He will also advise staff on whether the pitches are fit to play on, dependent on weather conditions.

The school excels at cricket, hardly surprising when their current cricket coach is former Yorkshire and England player, Arnie Sidebottom. During my visit, Arnie was preparing the First XI team for a National Schools Twenty20 final against Sedburgh School at the Northern Cricket Club ground in Liverpool that afternoon. He was putting the team through some intensive routines out on the main square. 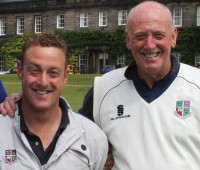 Arnie is full of praise for Simon, and reckons that the school cricketers perform well above their station, not just because of his coaching skills, but also because of the facilities provided and the ambience of the school grounds.

Simon has three cricket squares to maintain. The main square has fourteen pitches, whilst the other two - the Herbert Smith ground and the Island pitch - have five pitches each. All are Boughton County loam pitches, which the school has been using for a number of years and, says Simon, all perform very well.

Cricket is played during a thirteen week term, with six teams playing around eighty fixtures per term. The main square is also used for guest matches. Last year it was the venue for a game in honour of Arnie's son, Ryan Sidebottom who, having retired from international cricket and returned to his home county, Yorkshire, had been offered a testimonial year. Other matches on the square included the Old Boys XI, the MCC and various Twenty20 fixtures.

With so much land to maintain, coupled with the high usage, having only three full time staff quite often reduces the time Simon has to prepare his wickets. In reality, 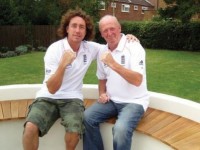 he does not have enough time to carry out a ten/fourteen day preparation programme, so concentrates on an intensive five day preparation that involves mowing, rolling, scarifying, brushing and a final cut, leaving some grass on to encourage pace and carry.

All the squares are cut to a height of 11mm at least three times a week, but more often if time and weather permits.

The outfields are also cut three times a week and kept at between 9-15mm using a Toro Fairway mower.

End of season renovations of the squares are carried out by Simon and his team who will scarify, topdress (250 plus bags of Boughton loam), aerate and overseed.

Like most schools, having the renovations done in July, when there is good soil and air temperatures, really helps ensure the seed germinates well and begins to develop a good rooting structure before the onslaught of the winter weather.

The school also has a number of artificial net areas and one all weather cricket strip which, this year, has had more use than normal because of the inclement weather. The younger age group teams have tended to use this facility to free up the grass wickets for the more 'serious' cricket played by the older pupils.

The school also excels at rugby and, during the winter term, will play in excess of seventy fixtures on their five rugby pitches. These are cut at least three times a week during the summer, they also use a 300mm deep spiker to aerate them. Regular brushing also helps stand the grass up whilst, at the same time, helping with presentation.

In March, after the rugby term has finished, all the pitches are spiked, overseeded and fed with fifty bags of 15:2:12.

Simon will also use his Sisis 175mm deep spiker to aerate the cricket and summer sport areas. He is also required to mark out a full size, eight lane grass running track, along with all the field event markings. These are overmarked on a weekly basis during the summer athletics term.

Simon feeds his turf with granular products. The cricket fertiliser programme starts in the autumn applying a 5:5:10 NPK ratio fertiliser.

This is followed, in spring and early summer, with three applications (May, June and July) of a 14:2:7 feed. The aim is to give some colour and keep the grass ticking over. Yet, he cannot afford to promote too much growth, as he would never keep up with the grass cutting!

Selective weed killer is applied on all the grass areas around the school plus the main cricket outfield. Total weed killers are used on paths and kerb edges, with fungicides applied as required.

The school's gardens are maintained by Andrew Hudson who, in the past three years, has redesigned many of them to make them more manageable and colourful. To celebrate the bicentenary, one garden area has been planted to incorporate the school's crest in a bedding and planting scheme.

Over lunch, which is provided for all school staff and is an opportunity for the grounds team to meet informally with the teaching staff, Simon and I discussed some of the issues he faces on a daily basis.

The extent of the grounds, and with the staff he has at his disposal, means that Simon and his team are never short of something to do! It has been particularly difficult this year, with the wet weather promoting excessive growth, and he praises his staff for their commitment in difficult times.

Simon is keen to put together a five year plan to further develop the way the grounds are maintained, optimising the resources he has available. Although, additional and larger mowing machines will be required in the future to cope with the extra work as his plan takes place.

To be able to improve sward quality of the summer sports pitches, Simon would need to allocate more resources to these areas, enabling them to be mown more frequently to produce a better surface.

This November, a full size 3G artificial all weather pitch is being installed. Simon is hoping that, whilst the contractors are on site, there may be an opportunity to do some additional work to re-level some of the sports pitches.

Simon knows only too well that, in the main, the reputation of any school is often dictated by the way the grounds are presented and the level of sport played at the school.

He also sees the value of obtaining the right equipment to make him and his team more efficient. By the same token, investing in specialist renovation and aeration equipment would enable the groundstaff to undertake their own end of season renovations which, in the long term, would save the school money.

Simon and his team utilise the resources available to them incredibly well, but they can see the huge potential of the outdoor facilities at the school in the coming years with continued investment and support. All these points will form part of Simon's five year plan.

Without doubt, the quality of the grounds has helped promote Woodhouse Grove in the best possible light, backed up by the pupils' prowess on the sports fields. It is what the school has been recognised for over the last two hundred years.

Simon relishes the opportunities given to him at the school and is delighted to work for such a prestigious establishment. Improving the standard of the school playing fields for the next generation of pupils who attend Woodhouse Grove School appears to be Simon's calling.