by Louise Challiss
in Woodland Management, Golf, and Arboriculture
on 01 Apr 2020

A CM220TMP woodchipper from GreenMech has transformed the woodland management programme for Wildernesse Golf Club. The heavily tree-lined woodland/parkland course in Sevenoaks, Kent, requires year-round thinning, pruning and felling. The new 9" machine has significantly improved the productivity for Course Manager Mark Todd and his team. 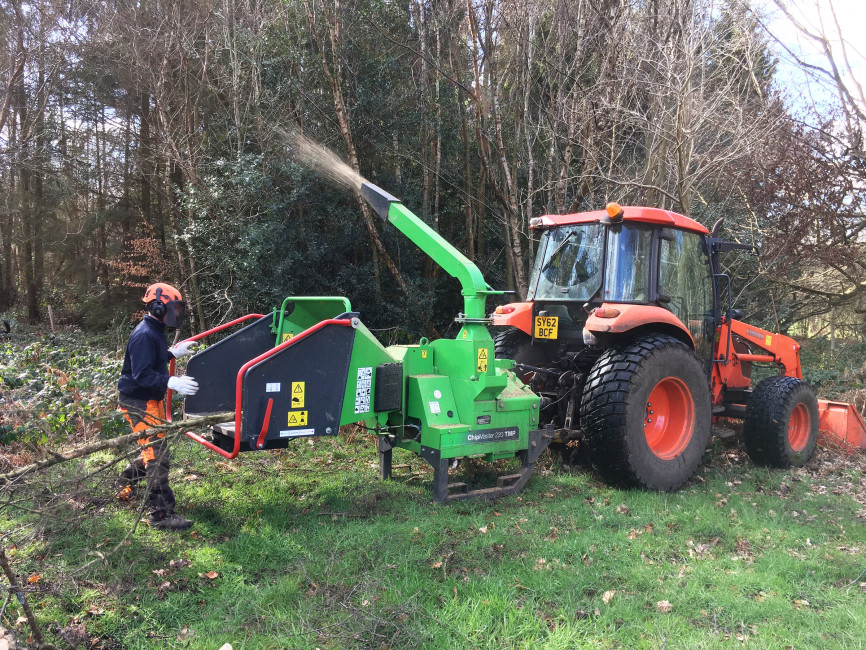 With classified ancient woodland, Chance Wood, at the very heart of the course, the scale of the task at hand led Mark to look for an upgrade to their existing machinery at the end of 2019. "I spoke with our local dealer Burden Bros who suggested we upgrade from a 6" to a 9" machine and demonstrated the GreenMech CM220TMP. You could see straight away how it was going to be so much more effective at dealing with the large quantities of material we have to process."

The course woodland predominantly consists of beech, birch and oak, however it's the holly in the understory of the canopy that causes a real issue. "Some areas are smothered in it and the awkwardly shaped branches used to be really difficult to get into our old chipper unless you spent time snedding all the branches off. The CM220TMP's large hopper means we can take down holly trees up to 20-foot-tall and get them straight into the chipper - reducing handling and stopping backlogs. Thinning this out improves not only the aesthetic and playability qualities, it also allows extra air and light to get down to the playing surfaces."

"Being tractor mounted means we can take the chipper wherever it is needed, with the chip we produce dispersed in the woodland, used in some of the decorative beds or given to the members for use in their gardens. One of the really great things is GreenMech's round disc blade chipping technology. Not only does it process more efficiently but when they blunt you simply turn them to the next sharp edge which means that, compared to traditional straight blades, you get three times the life out of each set."

Mark was also thankful for having the chipper at their disposal during the recent storms, where the course experienced strong winds and fallen trees. "The chipper disposed of these without a problem" Mark explains. "While it comes into its own over the winter months, we have projects to work on throughout the year and with the CM220TMP, these have now become much easier."