Woodrush RFC was formed in 1966 when Graham Williams the maths teacher at Woodrush County Secondary Modern School was asked by several ex pupils of the school to form an old boys club team. So in 1966 a team was formed and affiliated to the Rugby Football Union and began its existence playing local fixtures, either at the school playing fields or at the local park (Wythall Park).

The club began to prosper and by 1978 was running four teams. This in turn began to create some logistical problems of where to play. An opportunity to purchase some agricultural land (nine acres) led to the club applying for some loans from the RFU and a local Midland brewery. The outcome was that the club was able to secure the land and build a single storey clubhouse. The new facility offered space for two pitches, clubhouse facilities and changing rooms. The club house and pitches were officially opened in October 1978.

Today there are well over 1500 rugby clubs now operating and affiliated to the Rugby football Union (RFU) in England with many of these clubs being responsible for managing their own clubhouse and grounds.

Like Woodrush, many clubs in recent years have seen a decline in their facilities, especially in regard to the playing pitches and training areas, as most clubs have had to heavily rely on volunteer's to help maintain their facilities. Often these not having the appropriate knowledge, machinery and resources to maintain the pitches correctly.

I have even witnessed myself at Woodrush, the playing fields were cut with an ageing set of trailed gang mowing units towed by a club member car. Clubs can tend to buy cheap and inappropriate materials, often using local building sand to renovate their pitches. Many clubs even stop mowing the grass during the closed season ( May- September) often relying on a local farmer to come and cut it for silage before the start of the new season.

However, the biggest cause to the deterioration of pitches is purely down to the lack of basic maintenance operations. (Regular mowing, aeration and fertilising coupled with appropriate end of season renovations, which should include deep aeration (Vertidraining), top dressing (to restore levels) and overseeding of the pitches. 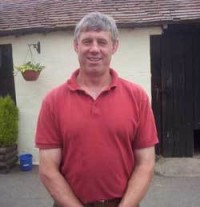 Geoff has also instigated and installed an all weather training area utilising bark material, in fact the concept has worked out really well, ensuring that the players have an area they can train on in adverse weather conditions.

Brian Smart the current Chairman of Woodrush Rugby club is pleased that the drainage works have been completed in time for the forth coming season, ensuring that the pitches will drain better during the winter months, allowing decent surfaces for training and playing. Brian said many clubs were often unaware of the funding opportunities available to them or how to go about getting these grants. Clubs tend to find out 'by word of mouth' and often are unclear of what they need to do to secure these funding opportunities. 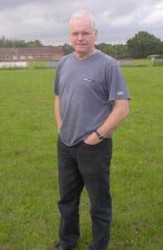 Brian said that it is important for rugby clubs to attract new members and provide adequate facilities to promote and play rugby. Brian added that Woodrush's future looks bright with the fact that they run a very healthy junior section at the club on Sunday mornings and have done so for a number of years; many of the players now filtering into the senior sides at the club. However it is still important to retain these players by offering decent playing and club house facilities.

In recent years the RFU has put together a number of strategies and policies to help clubs secure much needed funding for facility improvements.

In recent months the RFU have awarded a number of RFF awards for a variety of projects including pitch maintenance work, new roofs and clubhouse refurbishment are:

The following link will take you to the RFU Community Programme where details of funding opportunities can be seen and assessed.