0 Worcester Racecourse - One team - one dream

Worcester Racecourse was one of the pioneers of summer jumping and has made a great success of the initiative with 120 races attracting more than 1000 horses over twenty fixtures from May to October, competing for a prize fund of £863,000. 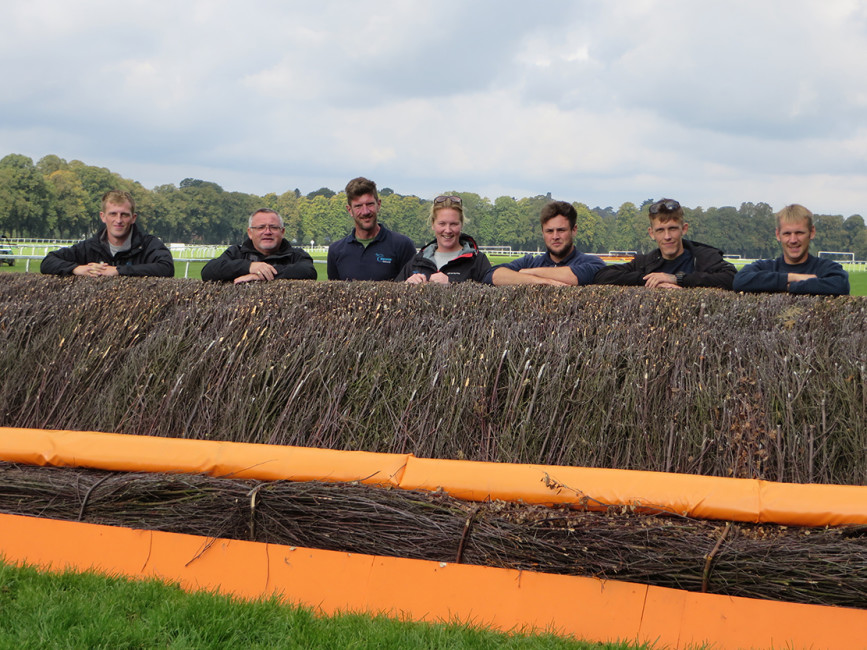 This year, the addition of a fixed brush hurdle series has been a particular attraction for trainers wishing to produce potential steeplechasers. Qualifiers from races at Worcester and Southwell competed for a £25,000 prize pot in the final on 25th October.

Other highlights include a valuable Monday fixture in mid-September attracting racing stalwarts to watch £20,000 and £12,000 races and, at the other end of the spectrum, Ladies Day in June, where proceedings halt mid-afternoon to allow the 10,000 strong crowd to watch the Epsom Derby on big screens.

"Trainers send their horses here because it is a flat galloping track where we can present consistently good going," explains Clerk of the Course Elizabeth (Libby) O'Flaherty. "There's a great group of Midland trainers, including big names such as Jonjo O'Neill, Richard Newland and Dan Skelton, but we also attract horses from further afield."

Switching from two separate running lines to one wide track where fresh ground can be presented for each meeting was a significant development, with seven possible rail movements, explains Estates Manager Duncan Penney.

"This was achieved by swapping fixed fences and hurdles for portables, which can be towed on and off the track and easily moved onto fresh ground."

The racecard starts with steeplechases, with a bumper (national hunt flat race) in the middle, allowing the groundsmen to take the fences off and replace them with hurdles for the final races. 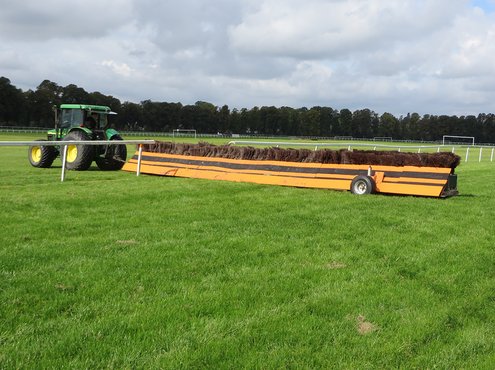 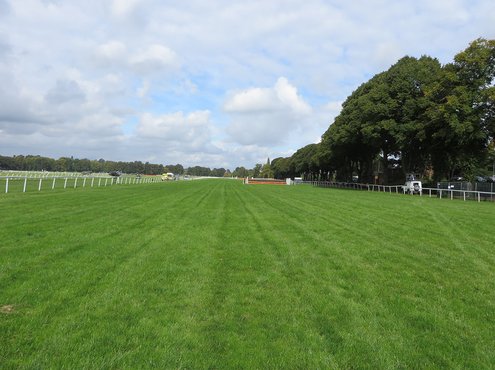 Moveable fences even allow Worcester to tackle its old enemy, flooding from the adjacent River Severn, which contributed to the move to summer sport in 1995.

"We haven't had a serious flood for two years, but when the river came up and deposited silt on the track, we simply moved the jumps to the outside and gradually worked our way back in as the turf recovered," explains Duncan.

A single continuous racing line also allows the Worcester team to make the best of irrigation water which, ironically, is drawn from the river.

"Irrigation is simpler and more efficient, we can put 6mm on in an hour, and the ground is much more consistent across the track."

Libby adds: "We have upgraded the irrigation system with stop valves so that we can limit applications in areas that hold water better, which also helps to keep the ground more consistent."

The ironies continue: despite the threat from the river after extreme rain events, Worcester is frustratingly dry, having received just 289mm in 2017 up to mid-September.

"Duncan and I spend all our time away from the racecourse texting each other to see if it is raining," laughs Libby. "Black clouds appear and then part and skirt the racecourse." 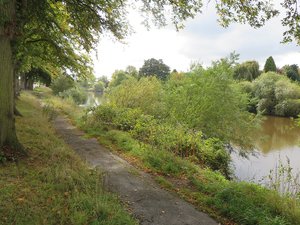 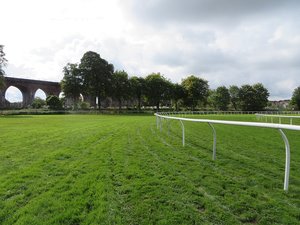 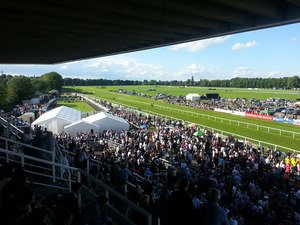 Irrigation planning gets even more tricky in the autumn as the shorter days and lower temperatures mean that the ground can quickly get too soft if watered.

In 2016, Libby started using a wetting agent, applied every six weeks along with liquid seaweed, and says that this has made a significant difference to the turf. "The turf holds irrigation or rainwater so much better, and you can actually see when its effects are wearing off."

Preparations for the season begin in March when the sward is cut back to 7.5cm ahead of spring tine raking, overseeding and verti-draining.

Duncan has switched to a 40% tetraploid and 60% diploid ryegrasses, producing a thick, vigorous sward. "We were one of the first racecourses to use it, now everyone is," he says.

Then a 15:2:12 fertiliser goes on, backed up by the seaweed and wetting agent throughout the summer.

"We race most weeks through the summer and can have just a two-day turnaround period," says Duncan. "In a warm spell, it can feel like we are constantly mowing, strimming and watering."

Mowing is currently under the spotlight with the 4.7m Votex out front mower up for replacement, most likely with a rear deck unit.

"Traditionally, the front mounted mowers were the only way to get the cut quality, but the Votex is such a big rigid mower, and modern rear decks have much improved suction, so that is the way we plan to go," says Duncan. "We do have ride-ons for wet conditions when we try to keep the tractors off the track, and to cut lower." 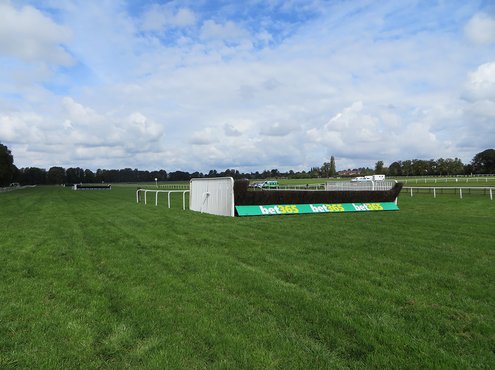 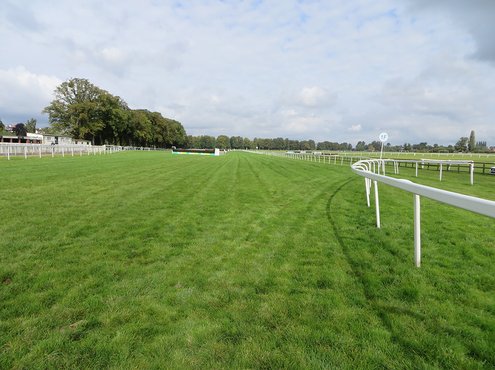 In the season, the sward is kept at 11-12cm, on the longer side of BHA guidelines, but Libby says this is popular with trainers. "They feel that it provides the horses with more cushioning and it certainly holds moisture better."

Libby adds that the three elderly John Deeres on flotation tyres do a good job and that there is no enthusiasm for bigger, more powerful tractors which could damage the ground.

"We don't have an enormous amount of kit - the seeder is borrowed from Uttoxeter and we use a contractor for verti-draining."

Duncan has two full time groundsmen, plus two seasonal staff and raceday casuals, and he and Libby also do duty at Hereford, making late summer a hectic time as the neighbouring track gears up for its winter campaign.

Libby jokes that it is the most junior groundman's job to rake the woodchip crossing which takes cars across the course into the central car park, once the signal is received that the course is clear after each race. "But we've all done it and we all muck in with every task, whether it's here or at Hereford. 'One dream - one team' is how I like to work!"

Winter is a quieter time at Worcester, when all the fences and hurdles come in off the track, for storage or repair.

"I aim to cut the track low and give it a final rake in late autumn, but I can be still mowing in December if it is mild," says Duncan. 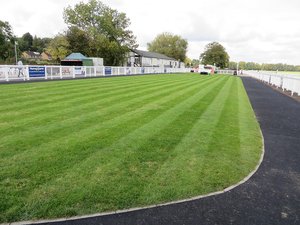 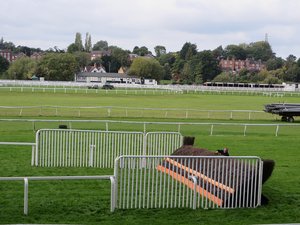 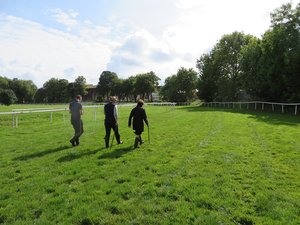 "There are lots of Christmas parties and other functions in the grandstand over the winter, so we still need to keep the parade ring areas presentable," adds Libby.

Setting up and clearing out the ninety-four box stableyard, across the track from the main buildings, also comes under the groundstaff's responsibilities.

Worcester celebrates 300 years of racing at Pitchcroft in 2018, with a celebration raceday on 4th July and the publication of a book about its history.

The Injured Jockey's Fund will receive proceeds from the raceday, and its vice president, legendary national hunt jockey John Francome has already lent his support to the celebrations.

The success of summer jumping at Worcester has not gone unnoticed and the course's Executive Director Jenny Cheshire comments: "It's a picturesque setting right at the heart of the town, which makes it attractive to racegoers, and the exceptional ground conditions producd by Libby and Duncan and their team draw great entries for summer jumping."

Worcester racecourse is owned by Worcester County Council and leased to ARC, so the public has access to the entire area. "We have to constantly check fences for damage right up to the morning of racing as people tend to climb them or sit on them," comments Libby. "The course is closed to non-racegoers just before racing for safety."

Libby O'Flaherty is part of the latest generation of clerks, appointed to her first job in this role at Worcester in 2015.

"I worked as a groundsman at Wolverhampton and then took the clerk's qualification. When all the candidates were discussing their dream job, I always said it would be Worcester, because it is such a lovely small course. I've worked with Duncan for 10 years and we get on very well; I feel lucky to have such a good team around me."